Former US diplomat warns of possible 'grave mistake' in Syria

Ryan Crocker, former US ambassador to Syria, Iraq and Lebanon, warns against a regime change plan that would depose the Alawite power structure in Syria and advises the Obama administration to contain the fighting by backing US regional allies, but not to intervene militarily. 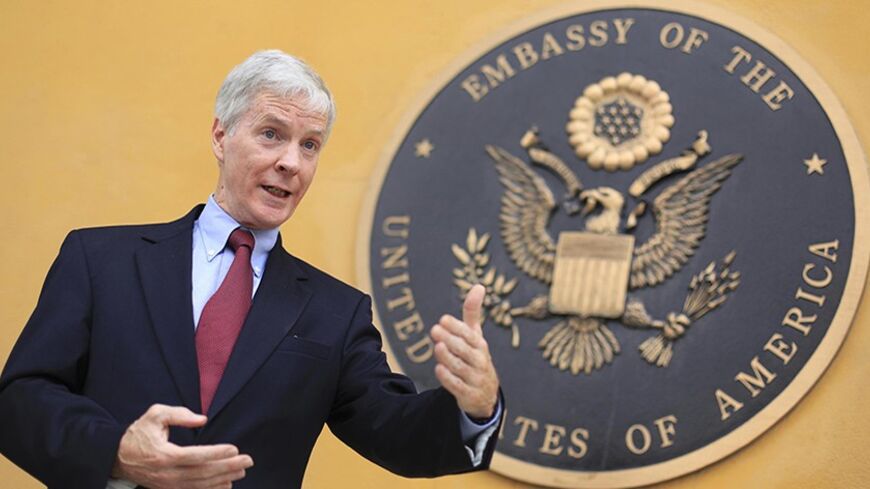 Ryan Crocker, then-US ambassador to Afghanistan, speaks during an interview at the US Embassy in Kabul, Sept. 14, 2011. - REUTERS/Rafiq Maqbool

Ryan Crocker, a distinguished former US ambassador to Lebanon, Syria and Iraq, told a Washington audience May 1 that US military intervention would likely not produce a better outcome in Syria and that the Barack Obama administration should focus on a “post-Assad” but not a “post-Alawite” future for that war-torn country.

“We would be making a grave mistake if our policy were aimed at flipping the tables and bringing a Sunni ascendancy in Damascus,” said Crocker, who experienced the pitfalls of US military involvement in Lebanon in the 1980s and in Iraq in the past decade. The United States would have no assurance, he said, that a Sunni government would be an improvement on that of Bashar al-Assad and the probability would be that such a government would be “dominated by the worst of the worst” religious extremists.

Crocker, who spoke along with several other regional experts at the Council on Foreign Relations, said the United States should focus on shoring up Syria’s neighbors, providing more assistance to refugees and displaced Syrians and seeking to influence Syria’s ruling Alawite minority to, over time, eventually jettison Assad.

This post-Assad but not post-Alawite strategy could more easily win buy-in from the Syrian government’s main external backers — Russia and Iran — though Crocker suggested that outside powers alone could not end the fighting and that the conflict would go on for many more years until the combatants are exhausted.

The UN estimates that more than 140,000 Syrians have been killed over the past three years and 9.3 million others are in need of assistance. It has appealed to the Syrian government to permit unfettered access to deliver humanitarian aid as demanded by a UN Security Council resolution in February — a resolution that the Syrian government has not implemented.

Born in Washington state, Crocker said that as a westerner, he was accustomed to forest fires and that the Syrian war resembled a western fire.

Such fires cannot be put out but can be contained, he said. “No reasonable intervention by us will make things better and we could make it worse.”

Paul Pillar, a former CIA expert on the National Intelligence Council for the Near East and South Asia, largely concurred with Crocker’s minimalist recommendations for US policy. However, Charles Dunne, director of the Middle East and North Africa programs at Freedom House, suggested that limited US military intervention for humanitarian purposes as well as more assistance to the externally based Syrian opposition could have an impact on the Damascus government.

The panelists appeared to agree that one potentially fruitful avenue was preparing dossiers on individuals alleged to have committed crimes against humanity for possible submission to the International Criminal Court or another tribunal.

In fact, Stephen Rapp, head of the State Department’s Office of Global Criminal Justice, has been compiling such information for the last two years against both the Syrian regime and members of the Syrian opposition. On April 30, the House Foreign Affairs Committee adopted a resolution from Rep. Chris Smith, R-N.J., chairman of the Subcommittee on Human Rights, urging the Obama administration to instruct US Ambassador to the UN Samantha Power to seek the creation of a Syrian war crimes tribunal. That appears unlikely now — especially given Russian opposition — but could influence Syrian Alawites down the road to pull away from Assad, Crocker said.

Pillar suggested that the Obama administration was right to focus on achieving a nuclear agreement with Iran and trying to defuse the Ukraine crisis with Russia. “If you can successfully conclude this [agreement with Iran], more possibilities will open up” regarding Syria, he said. “A few months from now, Ukraine won’t be more intense.”

Asked by Al-Monitor if Iranian-Saudi rapprochement might also be useful, as it was in ending Lebanon’s civil war in 1989, Crocker said the “sheer exhaustion of the participants” and the fact that Syria was victorious in shoring up its influence in Lebanon “ended that phase of the civil war. … Syrian forces were running the show. That is probably how this [the Syrian civil war] will end because of what happens on the ground, not because of some grand Saudi-Iranian bargain,” which Crocker thought is unlikely.

Despite frustration among US Sunni allies, such as Saudi Arabia, at the unwillingness of the United States to intervene more forcefully in Syria, the US public has shown no interest in even limited military intervention in Syria as evidenced by the congressional debate last fall over cruise missile strikes to punish Syria for its use of chemical weapons. The evolution of the Syrian opposition into one riddled with al-Qaeda elements has made many Americans unsure of the wisdom of trying to remove even a regime as brutal as Assad’s.

Crocker said those advocating military intervention underestimate the extent to which this is an existential struggle for Syria’s Alawite community and other minorities within the country. He pointed to the massacre in Hama in 1982, when Bashar’s father, Hafez, bombarded the city to exterminate the Syrian Muslim Brotherhood and in the process killed 15,000 civilians.

“This regime has been preparing for what is unfolding now for the last three decades,” Crocker said. After Hama, “they knew a day of reckoning would come. … Americans barely remember Hama but no Sunni or Alawite will ever forget it.”