King Abdullah’s sons hold key positions of influence in the government as the kingdom transitions to the next generation of Saudi royals. 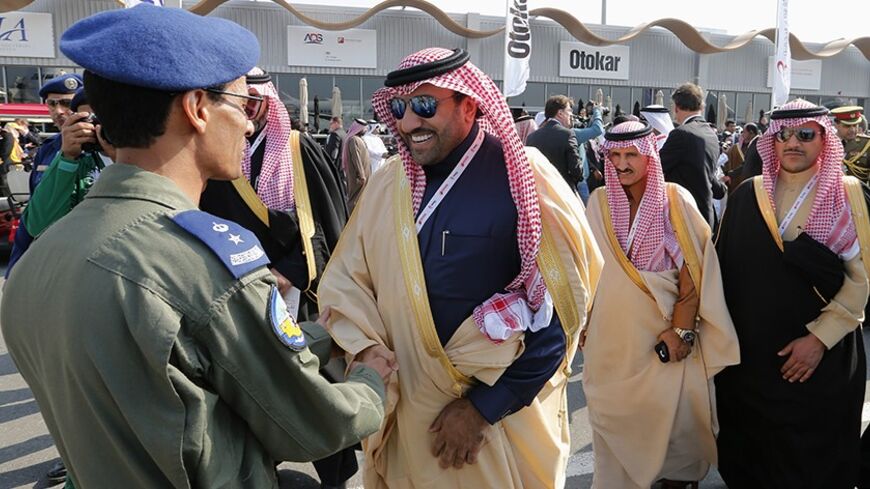 Saudi Arabia’s King Abdullah bin Abdulaziz, who will turn 90 this summer, has quietly placed his own sons in positions of power and influence in the kingdom. His sons have increasing authority in the Foreign Ministry, National Guard and two key governorships and are well-placed to play long-term roles as power passes to the next generation of the royal family.

The king is like all of his predecessors in seeking to place his own progeny in positions of importance. That is, after all, how monarchies work. The Arab Spring, the wave of unrest that has swept the Arab world since early 2011, seems to have encouraged the king to put his own sons forward to help the kingdom cope with the unprecedented challenges it has faced in the last three years.

Abdullah’s third son, Abdulaziz bin Abdullah, 51, is the kingdom's deputy foreign minister. He was appointed to the job in July 2011 after a long career in the Saudi National Guard and as an adviser to the king. Educated in the United Kingdom, Abdulaziz is the understudy to the kingdom’s long-time Foreign Minister Prince Saud al-Faisal, the son of King Faisal. Saud has long suffered from poor health but has stayed in office to provide the kingdom with the benefit of his expertise and years of experience. Abdulaziz is likely to be his successor as foreign minister when the day comes that Saud steps down.

King Abdullah promoted his second son, Prince Mutaib bin Abdullah, 62, last year to be the first ever National Guard minister, elevating command of the kingdom’s elite security force to the ministry level and placing his son in the cabinet. Often a key spokesman for this father’s views on regional and security issues, Mutaib is an up and coming important player in the kingdom. The Saudi Arabian National Guard (SANG) was commanded by Abdullah from 1962 until 2010. In the course of his half century in command, Abdullah lavished on it the best weapons and equipment money could buy and turned it into the strongest military force in the country, larger and better led than the regular army. Over 100,000 strong and equipped with armored vehicles and helicopters, the SANG has been trained by American advisers since 1975.

The SANG functions as the praetorian guard of the royal family. It secures the capital, Riyadh, and the two holy cities, Mecca and Medina, and is also deployed extensively in the oil-rich Eastern Province, which has a large Shiite population. SANG troops intervened in Bahrain in 2011 to suppress the reform movement on the island that demanded greater political rights for the Shiite majority from the Sunni royal family in Manama. By elevating the SANG to the level of a ministry, Abdullah has given his son a louder voice in the decision-making process of the kingdom on critical internal and external security issues.

Mutaib also played a prominent role in the large military exercises conducted in the kingdom this spring code-named "Abdullah’s Sword." At the conclusion of the exercise, the Saudis displayed their Chinese-built CSS2 intermediate-range ballistic missiles for the first time ever in public to highlight the kingdom’s deterrent capabilities. A major shake-up in the command of the regular Saudi military since the exercise has probably further enhanced Mutaib’s position in the military chain of command.

This May, Abdullah promoted another son, Prince Turki bin Abdullah, 43, to be governor of Riyadh. Turki had been deputy governor for just one year before taking over control of the nation’s fastest growing city and capital. He is a former Royal Saudi Air Force pilot trained at Lackland Air Force Base in Texas and the Joint Command College in the United Kingdom. He also has a master's degree from the University of Wales.

Turki will hold the rank of a cabinet member as well as governor of Riyadh. He has promised to fast-track the city’s ambitious metro plan. Instead of building one metro line in the capital in 15 years, Turki has promised six lines will be built in just four years. This is the kind of ambitious building project that Crown Prince Salman delivered in the 50 years he was governor of Riyadh before stepping up to the No. 2 seat in the kingdom.

Riyadh holds special importance for the family, as most of the royals have their primary residence in the capital. When Salman was governor he served as the family’s unofficial enforcer, making sure that princes or princesses who strayed into trouble were quietly put back on the right track without public embarrassment. Presumably, Prince Turki will now take on the job of discretely policing the family behind the scenes.

Turki’s brother Mishal is the governor of the second most important province in the kingdom, Mecca. The home of Islam’s holiest city and mosque, Mecca is also the site of the annual Hajj pilgrimage. The king’s second title, Custodian of the Two Holy Mosques, suggests that governing Mecca and Medina smoothly and effectively is crucial to the legitimacy of the House of Saud. Mishal took on the governorship in December 2013, having previously served as governor of Najran on the Yemeni border.

Abdullah’s eldest son Khaled, 64, has stayed out of the public eye for the last two decades. He was made deputy commander for the SANG’s western command in the immediate aftermath of the takeover of the Grand Mosque in Mecca in 1979 by a group of fanatical Islamic extremists. The takeover and recovery of the mosque was a major event in the modern history of the kingdom and the family. Khaled retired from the SANG in 1992 but is still influential behind the scenes.

All of Abdullah’s promotions take place against the background of the succession issue. Both the king and the crown prince are aging and in poor health. Prince Muqrin bin Abdulaziz has already been designated the third in line and will be the next crown prince. Muqrin is the last of the living and capable sons of the modern kingdom’s founder, King Abdulaziz ibn Saud. When Muqrin ascends to the next level, the family will face an unprecedented challenge: how to choose the next in line for the throne from a new generation of Saudi princes.

Abdullah’s sons will be well positioned to play key roles in that process. Mutaib is in an especially critical position to be one of the contenders. Saudi royal family politics are not transparent and are very dynamic, revolving around the health of elderly men and the competition of many aspirant princes. Within the family, Abdullah’s boys are key players in the murky business of the royal future.