The prospect of a "civilian opposition" depends on Hamdeen Sabahi’s performance, win or lose, against Abdel Fattah al-Sisi. 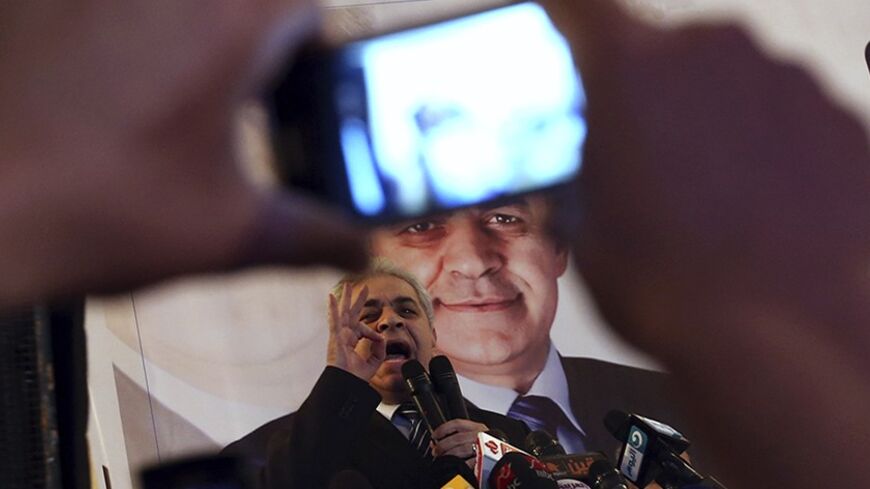 Egypt’s presidential campaign has formally started, and political talk shows have become the new frontier for candidates Abdel Fattah al-Sisi and Hamdeen Sabahi to flex their muscles and charm the public. Although it's hard to assess the real impact of these talk show interviews on viewers, they have clearly highlighted crucial aspects of the candidates’ manifestoes, personalities and styles. Contrary to earlier assumptions, the performance of both candidates in TV interviews has changed the perceptions of some and raised alarm bells for others. Overall, they have increased the prospect of a competitive election. Many who considered Sabahi’s candidacy a meaningless exercise are now asking themselves whether he can in fact gain enough support. However, a question mark hangs over the percentage of votes Sabahi can win.

In Egypt’s fluid and occasionally stormy political scene, the benchmark for assessing the potential performance of presidential candidates has drifted dramatically since the 2012 election scene, and even from January’s constitutional referendum. Ultimately, the TV interviews have exposed a few myths and provided the Egyptian public with two clear choices:

First, there is an ex-military chief, with a clearly autocratic tendency, who is banging the drum for the salvation of the state, and the idea that Egypt does not have the luxury of flirting with chaos. Sisi has stressed that the practice of freedoms must be balanced with national security and that the media should focus on rallying the public behind "the strategic goal" of "preserving the Egyptian state."

Sisi summed up his sentiments on this subject during a meeting with 20 editors of Egypt’s main newspapers when he said, "I fear that while we are practicing (democracy), we won't find a nation.” It's hard not to ignore Sisi’s endless hints that suggest a deep desire for social “recalibration,” as part of his proclaimed desire to save the state. It's also hard to ignore his relative unease with a future opposition, expressed so adroitly with his use of the word “tolerate” instead of “accept.”

Second, the civilian candidate Sabahi, backed by a long political career, is drumming a very appealing revolutionary theme, clearly targeting young Egyptians, revolutionaries and anyone who is concerned about freedom and rights in Egypt. He has also emphasized his intention to fight “a holy war” against poverty, a message that has resonated with some. In one episode after Sabahi was interviewed on a talk show (on Rotana Masryia), an Egyptian woman stated that she supports Sabahi because “he will stand with the poor.” Nonetheless, Sabahi is facing enormous challenges, as Samuel Tadros of the Hudson Institute suggested when he said Sabahi faced an uphill battle to get the required signatures for his candidacy. He has also been restricted by limited finances and a weak campaign. However, in spite of these limitations, Sabahi is shrewd and composed and has presented himself to the Egyptian public as a credible alternative to Sisi.

On the other hand, according to Wael Nawara, Sisi’s public interviews have influenced many activists previously set on boycotting the election to change their positions and announce their support for Sabahi. A friend in Cairo told me, “Sabahi invokes our sweet dreams, while Sisi exploits our fears.”

There are still two weeks remaining in the presidential campaign. Sisi will appear again in two more interviews, and let us hope he addresses some burning issues regarding his campaign, such as the noisy support he has received from some of Mubarak’s men, and more alarmingly, his failure to appear at his campaign rallies. Security concerns and fears for his life are understandable; however, his lack of visibility makes many Egyptians uneasy about his rule.

It's unclear whether allowing Sabahi some airtime on both state and private TV stems from real acceptance of the remote possibility of his victory, or whether it was just an attempt to garner legitimacy for the upcoming election. If, in fact, it was just an effort to garner legitimacy, then the plan backfired because Sabahi’s strong performance on air has undoubtedly garnered more support for him in the forthcoming election, an outcome that must be an unpleasant surprise for the Sisi camp. Legitimacy may indeed be of more value to Sisi than his share of the votes. He wants to turn the page of the transitional period and present himself to the outside world as Egypt’s legitimate ruler. Therefore, Sisi may not mind winning the election with less than 90% of the vote. In fact, winning with around 70% may not be bad news. On the other hand, although some of Sisi’s supporters have dismissed Sabahi as a serious contender in the elections, others, such as writer Lamis Ghaber, have been alarmed by Sabahi's good performance. Lamis, in fact, has expressed her fears openly on Twitter.

Following the EU’s and later the Africa Union’s agreement to monitor the presidential election, it may not be pluralistic as many have hoped, but at least it will probably be free. Hence, the result will indicate the strength of the mandate the next president can claim. Make no mistake, Sabahi is still the underdog, and Sisi may emerge victorious; however, the higher the percentage of the vote Sabahi can score, the stronger the chance of a serious civilian opposition. The margin of victory will be a crucial barometer for Egypt’s political status nearly a year after Morsi’s ousting. Furthermore, if a significant slice of the vote goes to Sabahi, it will serve as a much-needed safety valve to tame Sisi’s feared authoritarian tenure. For now at least, it would be unwise to discount Sabahi. A good defeat could be a victory in disguise for him, and a blessing for Egypt’s democracy.