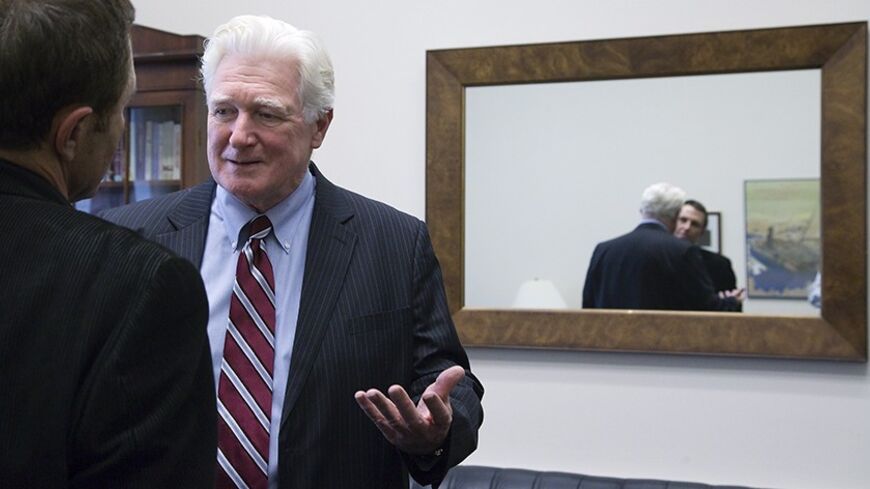 House appropriators unveiled a $570 billion Defense spending bill on May 29 that prohibits the Barack Obama administration from drastically expanding its assistance to the Syrian opposition without first getting Congress to sign off.

The restrictive language comes as the White House and the Senate Armed Services Committee have been indicating a desire for stepped-up US support for vetted rebel forces, perhaps by shifting training from the CIA to the Department of Defense. The House bill serves as a reminder that there's little appetite, especially in the Republican-controlled House, for any policy change that could pull the United States into another war in the region.

"The president … has indicated he's willing to help the constructive elements of the opposition, and we will do that," Rep. Jim Moran, D-Va., a member of the House Appropriations panel on Defense, told Al-Monitor. "But we're doing that under some serious restrictions."

The bill is the first under the Defense appropriations panel's new chairman, Rep. Rodney Frelinghuysen, R-N.J., who took over after the death last year of Rep. Bill Young, R-Fla. Frelinghuysen has expressed skepticism about stepped-up US involvement in the Syrian civil war, and indicated last year that he would oppose President Obama's request to authorize military strikes if it ever came to a vote.

Moran said "it's clear" that US assistance to Syria won't be allowed to expand into "one of those major, Cold War-types of operations that people may imagine."

"It probably reflects the judgment of the Congress," he said. "We've gotten involved in a lot of conflicts in the Middle East, and there's not much appetite for much more."

Section 9013 of the bill bans the funds made available by the bill from being used "with respect to Syria in contravention of the War Powers Resolution … including for the introduction of United States armed or military forces into hostilities in Syria, into situations in Syria where imminent involvement in hostilities is clearly indicated by the circumstances, or into Syrian territory, airspace, or waters while equipped for combat, in contravention of the congressional consultation and reporting requirements of sections 3 and 4 of that law." The law requires the president to notify Congress about the rationale, authority and scope for US involvement in foreign hostilities outside a declaration of war.

Last year's Defense appropriations bill did not include any such restrictions on Syrian aid when it was first introduced in June. The issue became a flashpoint when the bill hit the floor in July, however — the House unanimously passed an amendment from Rep. Trey Radel, R-Fla., that banned funding for US "military involvement in Syria without express authorization of Congress" — and the final omnibus bill, which was only approved earlier this year, ended up containing identical language to the newly released bill.

The Syrian opposition declared itself unconcerned with the restrictions.

"The restriction is no US boots on the ground," Syrian Opposition Coalition adviser Oubai Shahbandar told Al-Monitor, "but that is not what the opposition is asking for anyways."

Another provision of the bill, Section 8138, creates new restrictions on the 2004 law that controls funding for support of special operations to combat terrorism. The bill sets aside $50 million for such support but prohibits the money from being used to "initiate support for, or expand support to, foreign forces, irregular forces, groups, or individuals" without congressional notification.

The new bill further prohibits such funding for "any activity that is not in support of an ongoing military operation being conducted by United States Special Operations Forces to combat terrorism" unless the secretary of defense declares it is required by "extraordinary circumstances." The Western-backed Syrian rebels are increasingly identifying themselves as America's partners in combating terrorism.

A spokeswoman for the Appropriations Committee told Al-Monitor that the restriction "is not directed at any single effort or country," but is "just a prior notification requirement."

However, Defense subcommittee panel member Moran confirmed that it could be used to restrict aid to the rebels.

"It applies to Syria," Moran said. "But I think it's sufficiently ambiguous that if there is a good idea, it's not going to kill it."

The panel is scheduled to mark up the bill in closed session the morning of May 30. The full Appropriations Committee could take it up immediately after next week's recess.