Is Egypt winning war on terror in Sinai?

Egyptian military officials repeat statements that the Sinai Peninsula is under their complete control, but locals paint a different picture, as the war on terror continues. 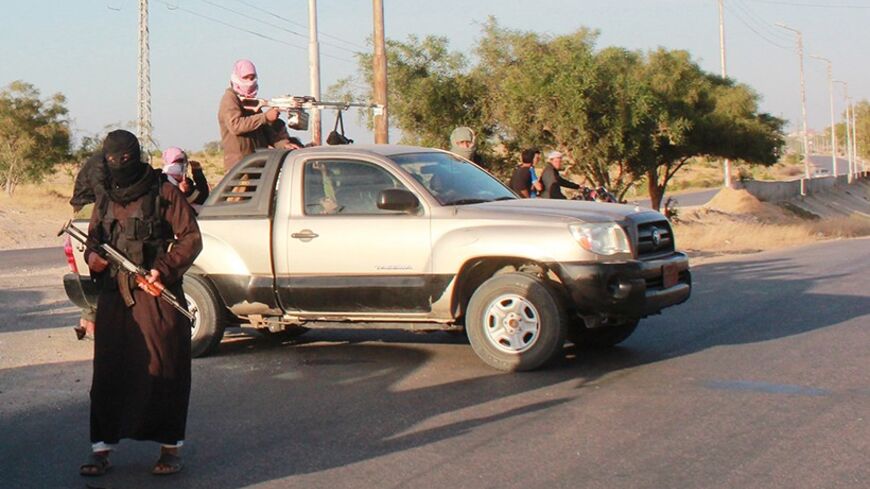 RAFAH, Egypt — The army says terrorism is reeling in the Sinai Peninsula and the Egyptian press and media frequently report positive results in the "great war against terrorism." According to locals, however, the ongoing war remains undecided nine months after it began in the peninsula.

Statements by Egyptian military commanders and officials claim that the Egyptian army has fully succeeded in controlling the Sinai Peninsula. The latter was turned into a killing ground where members of security and military institutions were targeted by terrorist organizations following the ouster of the elected Muslim Brotherhood President Mohammed Morsi on July 3, 2013.

A police officer in Sinai’s capital el-Arish, who spoke on condition of anonymity, told Al-Monitor, "More than 400 security personnel were injured and killed in a variety of terrorist incidents in the northern Sinai — particularly in the areas between el-Arish, Sheikh Zuweid, Rafah and the surrounding villages — after Morsi was deposed. The Sinai was beyond the control of security agencies since the beginning of the January 25 Revolution, and the situation constituted a national and international danger for the whole region, as a result of its close proximity to the Palestinian-Israeli conflict.”

Sinai residents acknowledged that army forces succeeded in gaining control of the peninsula after a period when it was turned into a playground for religious extremist factions. Al-Monitor spoke with Selim Armilat, who hails from the Armilat clan, one of the largest tribes in the Sinai Peninsula. “The Sinai had slipped outside Egyptian sovereignty, but the security situation changed following the army’s control of the region. In truth, the repeated press statements issued by officials concerning the near demise of extremist religious factions is completely false. Getting rid of those groups cannot occur unless the Egyptian government restores its trust and interest in the Sinai’s inhabitants,” he said.

Armilat explained the security situation on the ground in areas east of el-Arish. “The army imposes itself during the day. But, after troops return to their barracks at the end of the day, armed Salafist jihadist groups begin to deploy at night.”

“In the Sinai, adherents to this ideology from the various tribes and families number over 1,000. But the actual perpetrators are less than 100 individuals belonging to the Ansar Bayt al-Maqdis; the rest being too fearful of the state to act,” he said.

Al-Monitor also spoke with a Sinai tribal elder, who refused to disclose his identity for fear of terrorist reprisals. Many tribal elders have been assassinated as a result of them endorsing the military campaign to eradicate terrorism. “Army forces succeeded in tightening the noose around Ansar Bayt al-Maqdis by controlling entry and exit from the Sinai through the implementation of a rigorous plan aimed at cutting off the terrorists’ supply of weapons coming from Libya and Sudan, and smuggled through the border, via the canal provinces and into the Sinai by way of the Suez Canal.”

The elder expounded on the army’s plan to prevent weapons from entering Sinai, saying, “The first stage of the plan began with the closure of all crossings into the Sinai through the Suez Canal, except for the Kantara ferry crossing, which is tightly controlled. Furthermore, military patrols and helicopters were deployed to monitor the canal coastline and prevent the smuggling of weapons through motorboats and small vessels.”

According to the elder, the second stage entailed “controlling the desert central Sinai region, where rugged mountain ranges are located, such as the Halal Mountain, and where weapons can be stored or terrorists can hide. This was achieved through agreements with regional tribal elders to prevent the entry of militants, particularly considering that this area falls under the domain of the Tarabeen tribe, one of the largest in Sinai, without whose knowledge strangers may not enter.” Sinai is ruled by a tribal system of governance, with tribes controlling specific geographic areas where other tribes cannot freely operate.

“The third stage began with the army regaining control of the border tunnel area with the Gaza Strip in Rafah. The goal of that was to prevent the infiltration of extremist Palestinian elements, and put a stop to the supply of weapons and explosives that might reach the militants via Gaza,” he added.

A young jihadist with close ties to a defector from the terrorist Ansar Bayt al-Maqdis militants, who refused to divulge his identity, concurred with the elder. “In fact, Egyptian army forces succeeded in destroying all of the jihadists’ [Ansar Bayt al-Maqdis’] weapons caches at the beginning of the campaign. This led to their inability to fight the army. Prior to that, the militants employed all types of heavy weapons and rockets,” he told Al-Monitor.

The young jihadist explained the type of armory in the jihadists’ stockpile. “The fighters possessed heavy 14.5 mm and 50 caliber machine guns, RPGs, mortars, 107 mm rockets and anti-aircraft Stinger missiles that the militants successfully used to down an army helicopter,” he said, adding that all the weapons were lost “as a result of the weapons depots being heavily targeted by Apache combat helicopter, once the locations of these depots were divulged by tribesmen working with the army as guides. Furthermore, the army destroyed all four-wheel drive vehicles that facilitated the militants’ escape in the desert.”

The army’s crackdown prompted Ansar Bayt al-Maqdis fighters to develop new techniques, the young jihadist said, including “using sedans to blend in with the civilian population, resorting to Palestinian fighters who fled the Gaza Strip through the tunnels during the revolution, and manufacturing landmines and explosive devices with agricultural and chemical components.”

The conflict only changed course, but did not end, according to the jihadist. “As a result, the tactic evolved from one of direct confrontation to the planting of remotely detonated explosives on roads used by military vehicles. Once the army realized that cell phones were being used to detonate the devices, it shut down the whole cellular network. This led to the militants’ use of UHF transmitters to achieve their objectives as well as electronic toy remote controllers and other wireless radio signals," he said.

The young jihadist also disputed media reports that senior figures of Ansar Bayt al-Maqdis had been assassinated. “From time to time, the Egyptian press relays information from military sources indicating the death of the most dangerous members of Ansar Bayt al-Maqdis such as Shadi al-Menei and Kamal Alam. However, I personally saw them in the middle of May,” he said.

Conflicting news continues to repeatedly surface about Menei's death. Military sources have again stated to Egyptian media that Menei was shot dead in the early morning of May 23, along with two other dangerous members of the group, by unknown tribal assailants in the center of the Sinai Peninsula near Maghara Mountain. However, Ansar Bayt al-Maqdis denied this news in an official communique.

The issuing of conflicting reports has prompted popular criticism about the repeated dissemination of erroneous information regarding the demise of dangerous terrorist elements. Some locals even went as far as accusing the government of using the media to spread wrong information, deceive the people and exploit the war on terror as a tool to put pressure on the people for political gains.

Yet, other activists opined that the government is failing in its efforts to combat terrorism, particularly in light of continued terrorist attacks, the latest of which occurred when an armored vehicle was blown up in the center of el-Arish last week, in spite of the ferocity of the ongoing military campaign.