Iran’s southeastern province is in a severe economic crisis. 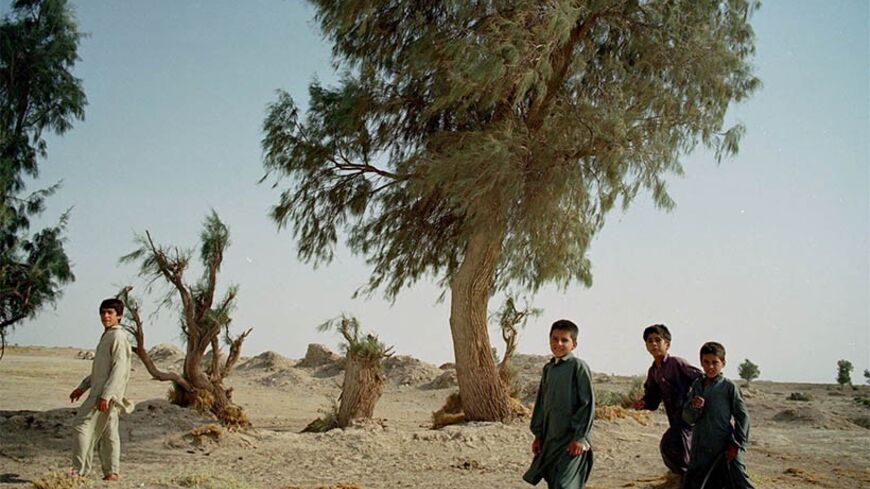 Young Iranian boys play under a tree beside a well outside Zabol in Iran's Sistan-Baluchestan province, July 17, 2001. - REUTERS

On April 15-16, Iranian President Hassan Rouhani and an accompanying delegation paid a visit to Sistan-Baluchestan, Iran’s southeasternmost province, bordering on Pakistan and Afghanistan. Sistan-Baluchestan has suffered over the years as a result of various historical, ethnic and geostrategic issues, leading to it becoming the country’s most deprived region in modern history. One of the first statements by Rouhani during his visit underlines the related sensitivities: “We don't have second-class citizens. All Iranians are equal.”

The people of Sistan-Baluchestan have a number of reasons to feel like second-class citizens. The region is currently in the midst of a deep economic crisis, with unemployment at 50%, according to the Ministry of Cooperatives, Labor and Social Welfare, and the majority of the province’s rural population ranks among the lowest 30% of national income groups. The province’s official annual household expenditure levels — 84 million rials (approximately $3,600) in urban areas and 46 million rials (around $1,900) in rural areas — are additional indicators of the poverty in the region. This degree of underdevelopment is attributable to four factors.

First, Iran’s southeastern region has never been included in the country’s comprehensive development strategies. Prior to the Iran-Iraq War (1980-88), the country’s planners had identified the western region as the main development axis, which represents the shortest route connecting the northern population centers to the Persian Gulf’s oil- and gas-rich regions and ports. The Iraqi invasion of Iran and the subsequent infrastructure damage, however, compelled Iranian planners to shift key infrastructure projects. The beneficiaries of this transition were the central regions of Esfahan, Yazd and Kerman, thus perpetuating the trend of the southeastern province featuring as a marginal region in regard to major infrastructure projects.

Second, Sistan-Baluchestan’s proximity to Pakistan and Afghanistan has turned it into a route for drug smuggling activities. The security implications of this situation have contributed to the region’s economic difficulties. Because of security concerns, even the government’s policy of offering tax holidays and inexpensive loans to companies that invested in the region failed to lead to large inflows of capital. In other words, the province was never a preferred location for industrial investment, hence the lack of jobs.

Third, the province’s relative remoteness from the central planners in Tehran has undermined its potential. The record of government investment in the region indicates that very few projects were planned or implemented for it that took into account the province’s specific regional, geographical and cultural realities. As a consequence, in Sistan-Baluchestan, like other remote regions, major investments in infrastructure were wasted, as they could not generate economic momentum.

Fourth, a significant segment of the province’s population, the Baluchs, are Sunni Muslims, who have historically suffered from discrimination. In fact, Iran’s most deprived provinces tend to be those with majority Sunni populations. Furthermore, terrorist activity by Sunni separatists, such as Jundollah and Jaish al-Adl, has increased insecurity in the region. A reminder of the province’s security challenges was the kidnapping of five Iranian border guards, four of whom were released and one of whom was allegedly killed by terrorist groups operating out of Pakistan.

It is clear from this combination of factors that Sistan-Baluchestan presents the most challenging region of the country for Iranian policymakers. Caught between armed smuggling and terrorist organizations and plagued by underdevelopment, unemployment and poverty, the province is in dire need of attention from the central government, the only entity capable of improving its infrastructure and overall economic conditions. In the June 2013 presidential elections, the majority of Sistanis and Baluchs voted for Rouhani in the hope that he would deliver on promises of job creation, economic development and increased security. It is against this background that Rouhani’s trip to the region could be important in generating impetus for the development of this deprived province.

Despite the weak performance of the central government thus far in Sistan-Baluchestan, there have been a few success stories. For example, the free trade port of Chabahar, currently being used as a platform for the transit of goods to Afghanistan and Central Asian markets, has injected some economic life into the region. The government should expand the province’s transit capacities to benefit from the growing wealth and trade activities in Central Asian markets. Furthermore, the construction of a major gas pipeline through southern parts of the region to the Iran-Pakistan border has generated a small amount of economic momentum and could further empower the region if the government were to use the gas supply to invest in gas-based industries. In fact, the province’s proximity to the Indian Ocean and the availability of port facilities in Chabahar make it a feasible export route for products targeting the growth markets in South Asia and East Asia. Thus, as soon as the gas feed is available, Sistan-Baluchestan’s southern regions represent potential sites for numerous industrial investments in gas-based industries.

That said, the challenges in Sistan-Baluchestan can only be addressed through a comprehensive development strategy that includes sustainable and intelligent solutions for security, social and economic development (including the availability of human resources and infrastructure), containing drug trafficking and improving relations with neighboring countries. This tall order might require a designated task force that includes relevant ministers, who should meet regularly in the province to ensure progress. Previous attempts at drafting similar plans have always been undermined by other regions and provinces that have more leverage in lobbying for infrastructure investment. As a result, the Rouhani administration should create an entity in charge of the development of this vulnerable region that stands outside those subject to lobbying by ethnic or provincial groups.

Rouhani and his ministers know that improving the economic conditions in provinces such as Sistan-Baluchestan will help improve the overall economic performance of the country. As long as there is inequality in the level of development between provinces, internal tensions will remain and continue to undermine balanced development in Iran.