The head of Iran's prison organization has denied the attack reported in Evin prison, despite statements and letters from prisoners. 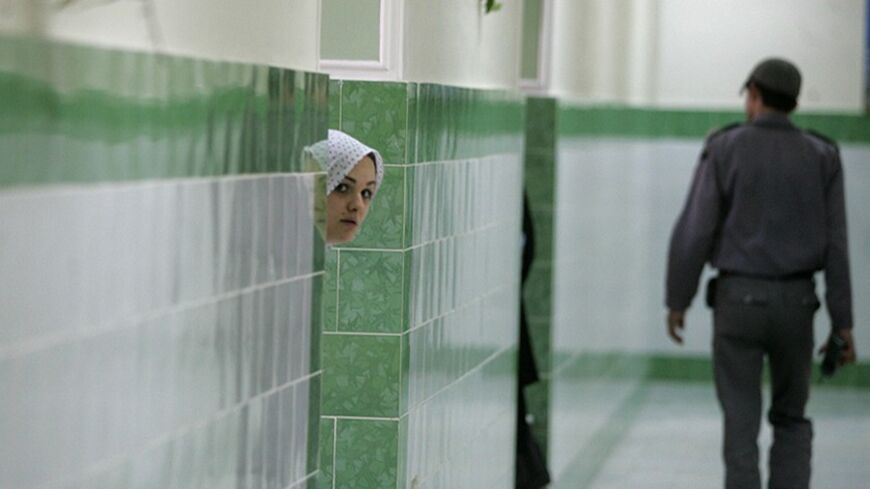 An Iranian inmate peers from behind a wall as a guard walks by at the female section of the infamous Evin jail, June 13, 2006. - AFP/GETTY IMAGES/Atta Kenare

The head of Iran’s prison organization has denied reported attacks on political prisoners in Iran’s Evin prison, and stated that the individual who shared this information with the media has been identified. This news contradicts many of the statements from prisoners inside Evin and those of the prisoners' families.

“Just as I said before, there was no confrontation at Ward 350,” Gholamhossein Ismaili said April 21 of the section in Evin prison where political prisoners are held. “There was only a routine inspection. The news of the confrontation between the prisoners and our employees is not true.” He added that the news was disseminated by a “hostile front” against the government.

Ismaili said that after the “false news” was published, “The prisoners easily contacted their families via telephones, and yesterday they met in person.” He continued, “After the families of the prisoners met the prisoners, they became aware of the false news from networks opposed to the system.”

Journalist and former activist Saeed Aganji spoke to family members who had met with prisoners inside Evin. They claimed that the prisoners had visible bruising and injuries, and described meeting with the prisoners under a heavy security presence.

Opposition website Kalame is one of the first news organizations to report the attack that left four hospitalized and dozens wounded. It was reported that after the attack, more than 30 prisoners were sent to solitary confinement.

A source inside Evin prison told Al-Monitor that the attack was spurred on by prisoners resisting the inspection, claiming that their personal items are often stolen during such inspections. The source described the corridor of the prison as being “covered in blood” after the attack.

BBC Persian also spoke to one of the political prisoners who witnessed the event. He said that when the guards entered the rooms, they attacked prisoners so violently, he felt they had the “intent to kill.”

Although the voice of the prisoner who spoke to BBC Persian was altered, Ismaili claims his identity is known. “After this news was published, the situation was monitored and the agent of the publication of this false news was identified,” said Ismaili, adding that the individual had been referred to the judiciary. Although Ismaili did not mention the specific networks this person is accused of speaking to, Fars News pointed to the BBC Persian interview.

An open letter to President Hassan Rouhani signed by 28 prisoners from Ward 350 asked him to investigate this “unprecedented” attack on political prisoners. Ismaili said that the letter, published April 20, was “fabricated and written outside of prison” with the cooperation of like-minded people inside.

Rouhani has not issued any statements on the prison attack. Justice Minister Mostafa Pourmohammadi, however, has commented on the attack, but claims it was an isolated incident. “We conducted a primary investigation and we saw that there was no confrontation,” Pourmohammadi said.