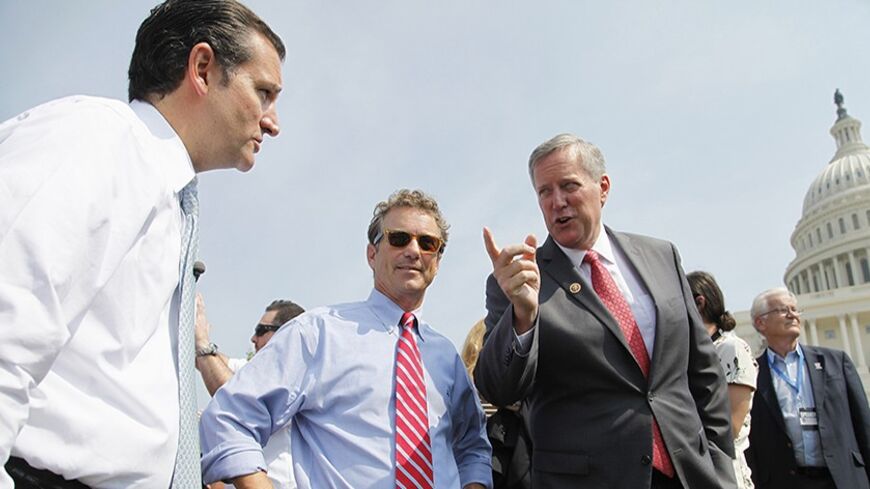 Republican Sens. Ted Cruz of Texas and Rand Paul of Kentucky and Rep. Mark Meadows of North Carolina (left to right) chat on the west lawn of the US Capitol in Washington, Sept. 10, 2013. - REUTERS/Jonathan Ernst

The Hezbollah International Financing Prevention Act urges the Obama administration to turn the screws on financial institutions — including the central banks of Lebanon and other nations — as well as media providers accused to aiding the Shiite militia and its media arm.

"It shall be the policy of the United States," the bill states, "to prevent Hezbollah's global logistics and financial network from operating in order to curtail funding of its domestic and international activities; and utilize all available diplomatic, legislative, and executive avenues to combat the criminal activities of Hezbollah as a means to block that organization's ability to fund its global terrorist activities."

The effort, which was first revealed by Al-Monitor last month, comes as lawmakers are seeking to undermine Hezbollah's ability to aid Bashar al-Assad's forces in Syria while harming its patron, Iran.

"Hezbollah continues to be a terrorist organization," Engel told Al-Monitor. "It has turned the tide of the civil war in Syria in favor of Assad."

The department can waive those requirements for "national security interests" but must inform Congress.

The bill also requires Treasury to identify any central banks found to be supporting Hezbollah. Sanctions can be avoided if the central bank demonstrates that it has stopped or "taken significant verifiable steps" to terminate such activity and the foreign government has provided "reliable assurances" that support for Hezbollah won't continue in the future.

"This is bipartisan legislation that gives extra teeth to the sanctions already in place targeting Hezbollah," said Jonathan Schanzer, vice president for research at the Foundation for Defense of Democracies and a former counterterrorism analyst at the Treasury Department. "The key to making this a success is for Treasury to identify financial targets in places like Latin America and West Africa, where Hezbollah has been known to operate. It will also be interesting to see if Lebanese banks are targeted, given Hezbollah's rather obvious exploitation of them and Treasury's reluctance to target them in the past."

The Meadows bill further gives the president 30 days to determine whether Hezbollah meets the requirements for designation as a significant narcotics trafficker under the Foreign Narcotics Kingpin Designation Act or a significant transnational criminal organization. Both designations would give the government more authorities to target the group.

Hezbollah has denied involvement in the drug trade.

"They say a lot of things that are far from reality and are part of the media war against Hezbollah," Hezbollah chief Hassan Nasrallah told Wikileaks founder Julian Assange in 2012 in the premiere of his now-defunct show on Russia Today.

The bill will be referred to the Foreign Affairs Committee, which has jurisdiction on sanctions legislation in the House of Representatives.