My perilous journey from Aleppo to Turkey

The journey from Aleppo to the Turkish border once took 45 minutes but is now a 6.5-hour drive fraught with danger. 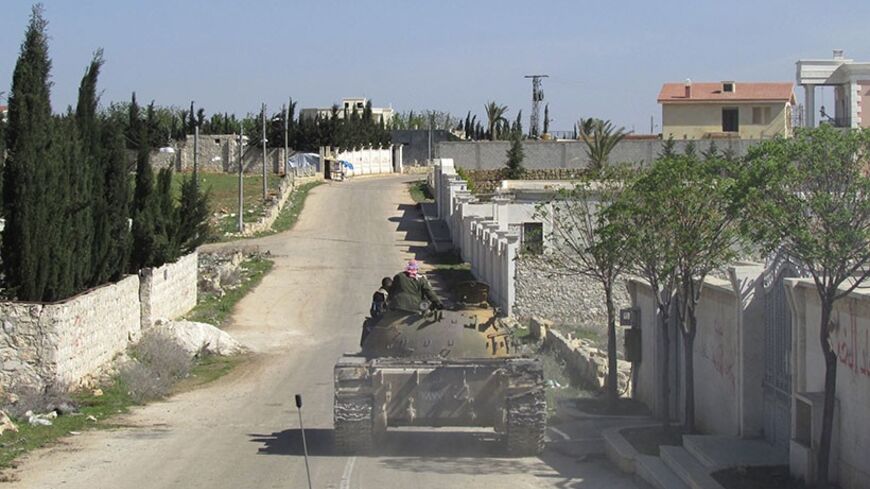 Fighters ride a tank as they patrol a street in the western countryside of Aleppo, March 27, 2014. - REUTERS/Abdalghne Karoof
Edward Dark
@@edwardedark
April 28, 2014

I recently traveled the only way out of west Aleppo, via the military route through Khanaser. It was quite an informative and at times tense trip that I’ll admit had me filled with trepidation in the lead-up. The Khanaser road is a makeshift track that winds across the Aleppo countryside down to Salamiyeh, in Hama, and connects the north of the country to the interior and the coast. It is also the only lifeline to the regime-controlled western part of the city and was recaptured by regime forces in a hard-fought campaign last summer.

The route itself is now heavily fortified, with army checkpoints every kilometer or so and foreboding sentinels of tanks and cannons strategically placed on nearby hills, their barrels fixed on intersections and weak points. The route's capture by regime forces caused disarray and recrimination among the rebel forces, as they traded accusations of treachery and factionalism, prompting Col. Abdel Jabbar al-Akidi, head of the rebel military council in Aleppo, to resign his post in disgust. I wanted to get to the rebel-controlled Bab al-Hawa crossing into Turkey, a 6.5-hour journey along a loop of roughly 500 kilometers (311 miles) because of road closures. Before the war, driving directly to the crossing would have barely taken 45 minutes.

My trip would be dangerous in more ways than one. Aside from the possibility of being caught in crossfire, there was a real chance of being abducted or worse after crossing into the largely lawless rebel areas, of being arrested and “disappeared” for whatever reason from a suspicious regime checkpoint. This is why I chose a carefully vetted driver, an experienced veteran of the dangerous road we were about to embark upon and who had safely transported many of my relatives.

The driver, Ahmed, chose to use his private car and, to my surprise, brought along his wife, clad in full Islamic dress — a black head scarf and a thick, body-covering black abaya. He explained his logic to me: “We just look like a normal family traveling. No one should stop us or bother us along the way.” To my amazement, it worked like a charm. Only at one of the several dozen regime checkpoints were we stopped and asked to show IDs, and that was past Hama. None of the few rebel ones stopped us at all.

Ahmed and his wife, both middle aged, had been residents of the Sha’ar neighborhood in rebel-controlled east Aleppo, the scene of recent heavy barrel bombing. Ahmed explained how he had barricaded his house against looters and then fled with his family last year to Mashtal Hilou, a predominantly Christian town in Homs. “Many Aleppans now live there or near it,” he said. “We’re quite happy. There are no problems there.”

His instructions to me were indicative of the experiences he had previously had on this perilous drive, which he made for a living, and what we might encounter along the way. “Hide your mobile phone, and make sure there are no pictures or videos on it, either supportive of the regime or against it. Take your sunglasses off; someone might like them and take them. Don’t bring any canned foods or medicine. They will be confiscated for sure.”

“Do you have any money on you?” he asked. I did — a couple of thousand dollars and about $300 worth of Syrian currency. “Give them to my wife. She will hide them for you. … No, not here. Not so near the checkpoint. Wait until we are farther away.” I gave Ahmed’s wife all of my money. I entrusted the pair with it, as well as with my life.

In the regime areas, Ahmed instructed me to say, if asked, that we were going to Misyaf — a mixed Christian-Alawi regime stronghold. As we approached rebel territory, he gave me new instructions: “If they ask you what your job is, say you’re an unemployed worker at a garment factory from Bustan al-Qasr (a rebel stronghold in east Aleppo) traveling to look for work. Do not, under any circumstances, give the appearance of being even slightly wealthy or having any money. If they ask you where we’re going, say to al-Dana (a small town near the Turkish border) to visit relatives.”

The journey through regime territory was largely uneventful. The checkpoints waved us through, and the trip was almost pleasant. As we reached the no-man’s-land where the lines blurred between regime and rebel territory, I became edgy and apprehensive. We were by then making our way back up north, through the rebel bastion of rural Idlib, winding through countless unnamed villages, rubble-strewn narrow dirt tracks, often across ditches or farmland. I would sometimes ask Ahmed the name of the village we were driving through, and he would just shrug and say, “I don’t know. They all look the same.”

It was true. Amid the ruined houses, the shelling holes and the eerily empty streets, the black Islamic flag was the other recurrent feature. Gone were the green, white and black three-starred “revolution” flags, which had featured so prominently in the festive and lively mass protests that swept through these very same places at the start of the uprising. The symbolism was hard to miss. The mutation of a popular mass uprising into a largely Islamist insurgency with dangerous sectarian overtones was also clearly apparent in the graffiti that intermittently adorned the walls of some of the buildings we drove past.

Some were of Quranic verses or passages from the hadith, while others were simply ominous statements espousing the return of the Islamic caliphate and Sharia and denouncing the secularism of the “kufar,” or infidels. Graffiti also delineated areas of control, identifying which territory belonged to which group. They were mostly the heavyweights, like Jabhat al-Nusra and Ahrar al-Sham, but there were others as well, such as local militias that I had never heard of. Signs proclaiming “Sharia Court” or “Islamic Council” featured prominently on buildings in the larger towns. One sign read “The Syrian Independence Party.” The place had its own FM station and tower.

At length, we emerged at the Damascus-Aleppo highway, large chunks of which had been destroyed, hence the need for the long detour from Hama. We approached Aleppo, passed the ICARDA center only 30 kilometers (18 miles) from the city and then turned into the Bab al-Hawa road. There were several checkpoints along this route, all bearing black Islamic flags and manned by grim-looking bearded fighters who waved us on. We passed the town of al-Dana and were then on to the border town of Sarmada, which had been turned into a huge free zone, with rows upon rows of used cars, some with right-side steering. The driver stopped and parked there, and we boarded a bus to the border driven by a Salafist wearing military fatigues. His sermon about women in Islam stuck in my head as I finally crossed into Turkey and to safety.

My respite from the war will be brief, however, as I'll be taking the same treacherous journey again in a week, back to Aleppo. Were it not for the urgency of visiting stranded relatives in need of cash, I would never have risked this perilous leap of faith.