A political culture that utilizes "bans" more frequently deepens as the government fails to provide political solutions in Turkey. 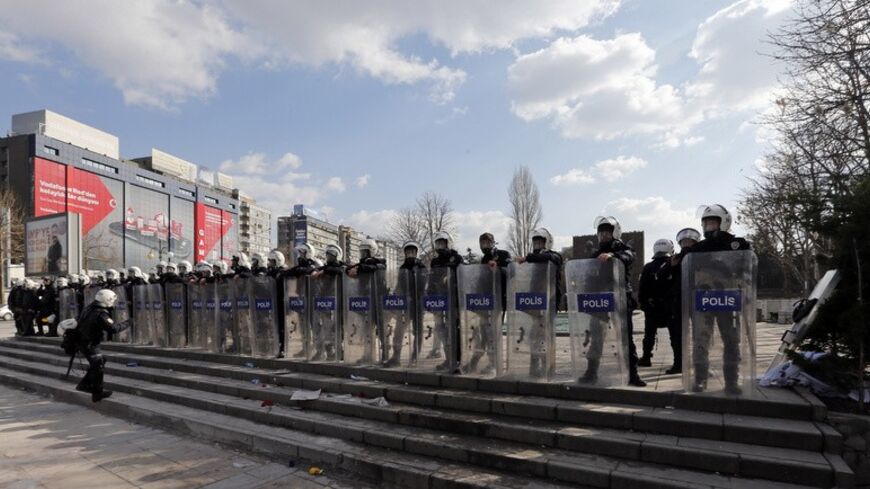 Riot police stand in line as they prepare to disperse demonstrators in Ankara, March 12, 2014. - REUTERS/Umit Bektas

I do not watch TV often. However, I try to catch a political discussion program on CNN Turk that features four or five pundits from different political perspectives analyzing current issues. On March 27, as I was watching Al-Monitor columnist Kadri Gursel criticize yet another gag order on the Turkish press, another Al-Monitor contributor, Nagehan Alci, burst out at Gursel, “You have defied the ban by reading this article. I am ashamed to be on the same program with traitors.” It is mind-boggling to see a journalist defend a ban on freedom of the press, yet it is not rare in contemporary Turkey.

Indeed, Turkish Prime Minister Recep Tayyip Erdogan has achieved world notoriety by first banning Twitter, then YouTube. (Oddly, even some of his party members defy the ban.) This is just the latest in Erdogan’s long list of “prohibited” acts. From alcohol sales to cesarean operations to co-ed housing for college students, Erdogan has been awfully eager to generate bans. More perplexing to many Turks — especially the younger generation — is how he gets away with arbitrary legislation. There are several interrelated factors that adequately answer this question, but a partial reason is Turkish political culture. This, of course, predates the Justice and Development Party (AKP) administration of the last decade.

Consecutive Turkish governments have ruled with “bans” of one sort or another. When an administration fails to provide solutions to collective problems, its propensity to introduce “new and improved” prohibitions increases. The struggles of nascent Turkish democracy can be told as a history of complicated bans, whether economic, social, cultural or political. What cannot be controlled smoothly has been banned legally. Yet, bans have rarely helped resolve collective dilemmas.

A good example of this would be the Supreme Electoral Council’s detailed regulations for the upcoming elections. At over 3,000 words, the law limits election campaigns at different stages. For example, 10 days prior to the March 30 election day is the last day opinion polls can be published. After that, the press is banned from sharing surveys that may affect voters' decisions. Despite the latest democratization package allowing the use of the letters X, W and Q — particularly to help with the writing of Kurdish — the election campaign regulations clearly stipulate that all campaign material should be in Turkish.

After 6 p.m. on March 29, campaigning is no longer allowed. This regulation, which was specifically announced for the upcoming elections, is only part of wider legislation regulating election-day bans. So, on March 30, you will not be able to find an open pub or night club, or a restaurant serving alcohol, because all alcohol sales are banned on election day. Additionally, with the exception of security forces, no one is allowed to carry firearms. It is further forbidden to air any news or commentary about the election and its results until 9 p.m.

Given all these detailed bylaws, you may think campaigning goes smoothly in Turkey. That is, unless you have read Turkey Pulse columnist Tulin Daloglu’s piece titled “Talk of assassination plans in Ankara ahead of Sunday election.” Daloglu's bold yet fair analysis presents the rumors of assassinations and armed militias roaming the streets, news of which comes from the mouths of Ankara's mayor and political candidates. Just a Google search of the words “election” and “attack” in Turkish produces thousands of hits from the last three months. News of several brutal attacks poured in — particularly via local news and social media outlets — indicating the intimidating environment faced by opposition candidates.

One of the hardest hit was the People's Democracy Party (HDP). This new Kurdish socialist party has been quite refreshing with its ideas of inclusiveness in the Turkish political scene. The LGBT community and women are not only welcomed but also encouraged to participate through liberal allotted quotas. Yet, the HDP has been the victim of dozens of attacks since the campaign started in January 2014. Hatice Altinisik, HDP’s deputy chairwoman and a candidate in the Kucukcekmece district, told Al-Monitor, “Only established parties that have passed the 10% quota are eligible to receive government funding. We, as the HDP, did not receive a dime. On top of it, we were not given fair representation in the press. Indeed, we were considered invisible. Plus, misinformation was circulated about our party and our candidates, and we were physically attacked multiple times through different sections of the misguided society.” On March 10 in the Fethiye district, HDP headquarters were brutally attacked by locals. To top it off, HDP’s logo was removed by the kaymakam (sub-governor).

To be fair, the AKP suffered some “attacks,” as well. Not a day passed when my Twitter timeline did not show an AKP bus spray painted with slogans like “Hirsiza Oy Yok,” meaning "No Vote for the Thieves." In the last couple of days, we have even seen stickers with similar slogans on AKP elites’ cars. They were promptly removed. One middle-aged woman dared to make an impolite hand gesture during Erdogan’s Izmir rally, and she was immediately taken into custody for “offending the prime minister.”

Now, you may ask, are there no brave campaigners who could resist these rules? Yes, the strongest resistance to campaign regulations came from the prime minister. For example, using the Turkish flag in campaign material is prohibited. Hence, the Supreme Electoral Council banned an AKP TV ad. Erdogan did not appreciate this and declared, “We will ban the ban.” Turkish state television, TRT, following Erdogan’s lead, kept airing the banned ad. On March 29, T24 also defied the council’s ban and aired Erdogan’s rally live.

Although Erdogan defied a ban that was against his political interests, he was keen on maintaining other bans. So much so that the March 27 Friday sermon — written by the Directorate of Religious Affairs and then read by mosque imams — generated public criticism, as it was perceived to defend the government’s actions, particularly the bans on YouTube and Twitter. It is worth emphasizing that according to the council’s campaign regulations, it is forbidden at all times to “campaign” in religious institutions.

In Turkey, more restrictions and legal penalties failed to provide a smooth, calm campaign season. Indeed, we witness the deepening of a political culture that utilizes "bans" more frequently as it fails to provide political solutions. We have seen that those who fail to govern successfully ban more frequently, just as they defy the ban when it is inconvenient for them. At the end of the day, who can stop Erdogan?