At this year's Riyadh International Book Fair, greatly anticipated by Saudi writers and intellectuals, a display by a new press run by Saudis out of Beirut was ransacked and shut down. 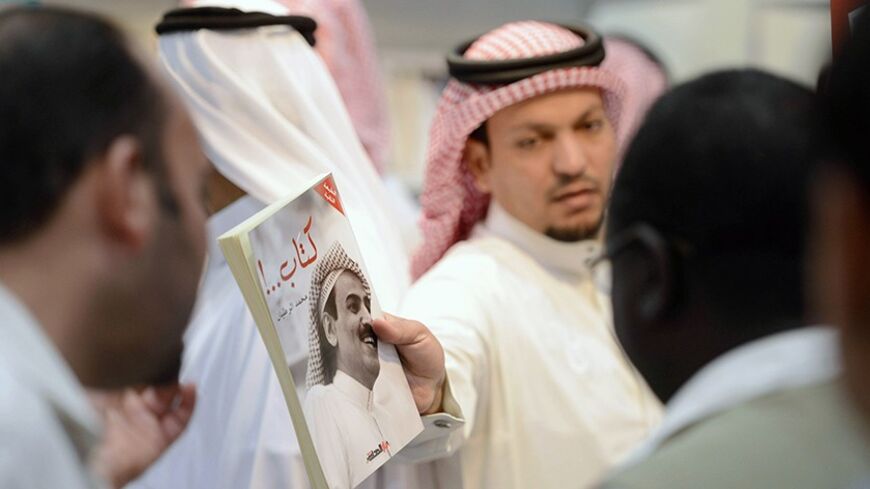 A man shows a book by Saudi writer and poet Mohamed al-Rotayyan during the Riyadh Book Fair at the International Exhibition Center in Riyadh, March 9, 2013. - REUTERS/Faisal Al Nassar

Saudi Arabia boasts about the annual Riyadh International Book Fair, where Saudis can explore a flourishing book market, meet authors and engage in intellectual discussion. Every year, however, the book fair is transformed from an intellectual market into something more resembling a battle for the hearts and minds of Saudis. The gathering has become an arena in which multiple actors want to assert their presence, control the event and dictate what Saudis should and should not read. During the 2014 book fair, this struggle resulted in visitors on March 7 posting photos online of the destruction inflicted the night before on the booth of the Arab Network for Research and Publishing, a relatively new press based in Beirut.

Many writers and readers look forward to the annual book event, which breaks up the monotony of intellectual life in the kingdom and allows them to enjoy a different kind of consumption. The government promotes the book fair under the auspices of the Ministry of Information, while security agents, accompanied by members of the Committee for Promoting Virtue and Prohibiting Vice, otherwise known as the religious police, search for books to confiscate and destroy. They also look for any signs of mingling between the sexes and flirtatious behavior deemed to undermine public order.

A group of young Saudi intellectuals, including Judge Abdulaziz al-Qasim and the journalist Nawaf al-Qudaimi, established the Arab Network for Research and Publishing to promote books offering new perspectives on society, religion and politics. As the press' director, Qudaimi worked hard to create a significant collection of books written by Saudis and other Arabs, all presenting new interpretations of history and religious tradition with a view toward reconstructing consciousness and promoting an examination of past and current knowledge. The press also translates books from other languages, primarily academic English books on Saudi Arabia and other countries. Days before the book fair, Qudaimi had begun to promote the press' 2014 list, tweeting short promotional materials and summaries of the awaited titles. He was granted permission to display the publishing house’s collection in a designated corner at the Riyadh book fair.

The press' books arrived and were displayed as expected. Qudaimi's early publicity effort was so successful that a number of Saudis were looking forward to purchasing copies of their favorite volumes. They were disappointed, however, when they arrived to find the ransacking of the press’ display a day after the book fair opened its doors. Books and papers were scattered and thrown from the tables set up for their exhibition. Thus, the press was only able to display its collection for a very short time before being closed down.

Among Saudi liberals speculating about the reasons behind the raid, the majority prefer to blame the religious police, absolving the regime from any wrongdoing. This is an easy way out for them, because they would like to think of the regime as a bastion of enlightenment working against a tide of religious conservatism, bigotry and radicalization. They have exhausted this myth, however, and instead live under the illusion that King Abdullah bin Abdulaziz is a reformer, working hard to open Saudi Arabia to new ideas and curb the influence of radical groups across the society. They cheered when a recent royal decree promised to punish radical groups and designate them as terrorists. The raid at the book fair affirms the myth's collapse.

The raid not only proves that reform in Saudi Arabia is in short supply, but confirms that the regime is not serious about fighting terrorism. Freedom of expression is not by any means an unlimited right, but it is a precondition for open debate, including tackling the roots of violence. Without people being able to engage in free debate, read alternative interpretations and expose themselves to new ideas, the regime is fighting a lost cause. In fact, the raid proves that the government does not want to create the intellectual conditions for new ways of thinking and behaving.

The raided publications hardly contain any radical ideas, blasphemy or immoral material. In fact, several volumes deconstruct the roots of Wahhabi teachings, in particular those that would perpetuate repression at the personal and political levels, promote violence and suppress people’s rights. Many authors are critical of old Wahhabi teachings that promote rejection of democracy and civil and political rights.

A common theme runs through many books in which some authors search for ways to free the Islamic tradition from the authority of religious scholars whose interpretations have become sacred, especially in Saudi Arabia. Rather than exporting Wahhabi ideas, these Saudi authors draw on the work of modernist scholars in North Africa and elsewhere to reconstruct Islamic interpretations suitable for modern society. Many volumes offer a serious critique of Islamists in Saudi Arabia, highlighting their shortcomings in preparing people for demanding their rights.

The book fair raid indicates that such a collection of books has been designated a threat to Saudi national security. The regime, however, cannot fight terrorism simply by arresting terrorists and criminalizing radical language that might incite violence. It should allow people to engage in alternative ways of emancipating themselves and freeing their conscience from the oppressive preaching that still dominates the country. The regime knows very well, however, that this freedom is inevitably bound to sweep away the political repression that sustains, finances and nourishes those whose main objective is to control the hearts and minds of citizens. As a regime founded on a holy marriage with Wahhabism, one of the most rigid Islamic traditions, considered by some as Islam par excellence, it knows all too well that its survival is dependent on Wahhabism remaining a revered corpus of religious thought.

The Saudi regime is keen to prepare Saudis for the afterlife, but the raided books aim to prepare them for this life, hence they were targeted in a way that demonstrates how dangerous this perspective is viewed. Books that praise the pious rulers of the country, congratulate them on their development projects and commend their support of Islamic causes are well-guarded on the book fair’s shelves. Also those publications that teach one how to ablute during water shortages remain abundant, but those that prepare people to pursue their rights as citizens or deconstruct mythologized history are banned.

No historical or political change can be forthcoming without a paradigm shift that dismantles traditional ways of thinking and replaces them with new perspectives. The regime fears this shift and is determined to suppress its slow birth. The Saudi regime is fighting a losing battle in the age of new media, during which books can circulate in electronic form. Its raid only sparked curiosity and increased people's determination to search for the destroyed publications online.

The iron curtain has already fallen, and Saudi authors are themselves the new archaeologists with sturdy trowels for excavating a fossilized body of religious and political thought. The famous 10th-century Arab poet Abu al-Tayib al-Mutanabi said that the sword is mightier than the pen, but weak and troubled regimes, such as the Saudis', seem to fear the pen more than the sword.