Prime Minister Nouri al-Maliki is accused of using the judiciary to fight his political opponents. 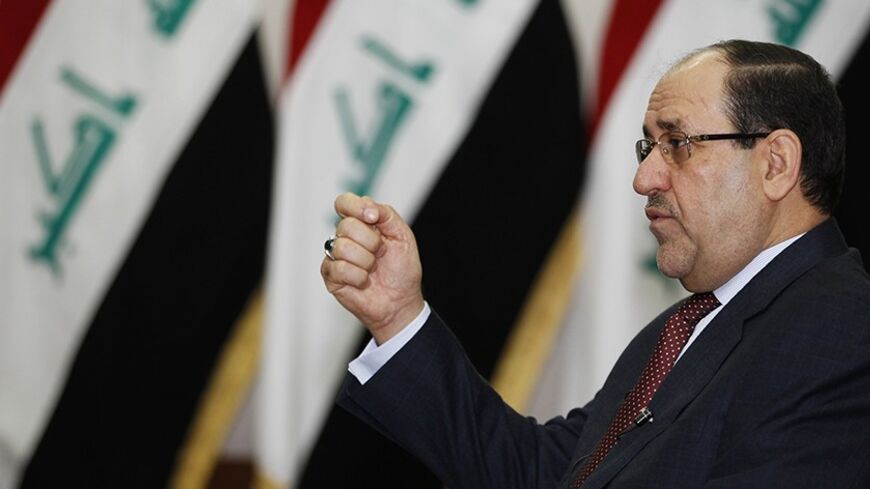 Many of those who opposed the regime of former Iraqi President Saddam Hussein and worked to deliver information about his crimes and violations to international human rights organizations, such as Amnesty International and Human Rights Watch, never expected that these organizations would someday publish reports about serious human rights violations in Iraq led by Saddam’s opponents. There is, however, a yawning gap between the high expectations for post-Saddam Iraq and today’s reality. This gap is particularly apparent in the Iraqi judicial system.

Amnesty International's “Annual Report: Iraq 2013” points to serious human rights violations and to the failure of the Iraqi judiciary to ensure that justice is carried out according to international standards. The report criticizes the increasing recourse to the death penalty and the prevalence of torture and ill-treatment in detention centers, especially those controlled by the Ministries of Defense and Interior. While the report notes serious violations by armed groups, it also criticizes the government for mass arrests, alleging that many of the convicts, including some who have been executed, did not receive fair trials.

The Supreme Judicial Council issued a statement on Feb. 24 responding to the Amnesty report. It stressed that the death penalty is only handed out for serious crimes that threaten the security of citizens and their lives and that “courts apply the death penalty after making investigations and prosecutions that meet all international standards for fair trials.”

In a speech in February on the occasion of the opening of the headquarters of the Federal Judicial Authority, Medhat al-Mahmoud, the authority's head, acknowledged the difficulties faced by the judiciary because of the sheer number of cases, especially those involving terrorism. He however defended the judicial branch's record for dealing with cases independently and impartially.

The Iraqi judiciary recently sought to correct some of its procedures, such as not relying exclusively on the testimony of supposed secret informants in cases of terrorism and violence after a number of malicious prosecutions were discovered. The judiciary has also began using an electronic system to keep track of persons accused of various crimes, especially terrorism, to reduce the number of forged arrest orders.

Prime Minister Nouri al-Maliki’s opponents accuse the judiciary of being strongly influenced by the government, while Maliki himself is accused of using the judiciary against his opponents. These accusations first arose during the 2010 elections when the Federal Court adopted an interpretation of Article 76 of the constitution. This interpretation allowed Maliki to form the (current) government, although his party did not earn the highest number of votes.

The accusations resurfaced in July 2010 when the Federal Court ruled in favor of the government in a disagreement with the parliament, greatly weakening the legislature by stripping it of the power to legislate independently of the government. More recently, because of a conflict between Maliki and Parliament Speaker Osama Nujaifi on the budget and a threat from Maliki to turn to the judiciary for a ruling, some fear that parliament will be stripped of one of its few remaining powers, introducing amendments to government-sponsored draft laws.

Many were convinced that the government had succeeded in using the judiciary to target its political opponents after the 2011 indictment of former Vice President Tariq al-Hashemi on terrorism charges and after similar charges were made against a former finance minister, Rafi al-Issawi, in December 2010.

This perception has grown in the weeks leading up to the legislative elections scheduled for next month. The Electoral Judicial Committee has barred participation by a number of would-be candidates known for their harsh opposition toward Maliki. For example, the committee ruled that Issawi is ineligible because he faces arrest warrants stemming from corruption and terrorism charges and because he has refused to appear in court to defend himself.

Based on a complaint by Hanan al-Fatlawi, a parliamentarian in Maliki’s coalition, the committee also voted to ban a parliamentarian from the Sadrist movement, Jawad al-Shahaili, because he has been accused of embezzlement. Although the same committee overturned decisions prohibiting Sabah al-Saadi and Mithal al-Alusi, both anti-Maliki deputies, from running, it did not change the prevailing belief that most of the time, the judiciary sides with the government. Maliki’s opponents provide another example as evidence — the acquittal of Mishan al-Jubouri on charges of corruption and financial support for terrorism. Jubouri is a former Maliki opponent who recently became his ally.

The problem surrounding qualifying for elections is primarily due to the interpretation of a clause in the electoral law that provides that a candidate must have a record of “good conduct.” This clause has allowed Maliki’s coalition to challenge some potential candidates because they had been accused of crimes.

To protect some of its members, parliament issued an “interpretation” of the clause prohibiting the Independent High Electoral Commission (IHEC) from denying participation by anyone against whom a final judgment has not been issued. There is nothing, however, in the constitution that gives parliament the right to issue such decisions and make them obligatory. This issuance is viewed as evidence of parliament's weakness rather than strength, and its members' inability to secure a majority to legally amend the law. Because of parliament's lack of authority in this case, the Federal Judicial Authority did not approve the new interpretation, as noted in a statement issued by the IHEC’s Board of Commissioners on March 25 in which its members collectively resigned because of pressure from the “conflict between the legislative and judicial authorities.”

With election day approaching, it remains unclear how this crisis will end. It certainly will not remove the pressure on the Iraqi judiciary, which continues to face the challenge of proving its independence and integrity.