The rollout of Israel's seizure of a ship carrying Iranian arms may have disappointed Israeli leaders looking for a public relations windfall. 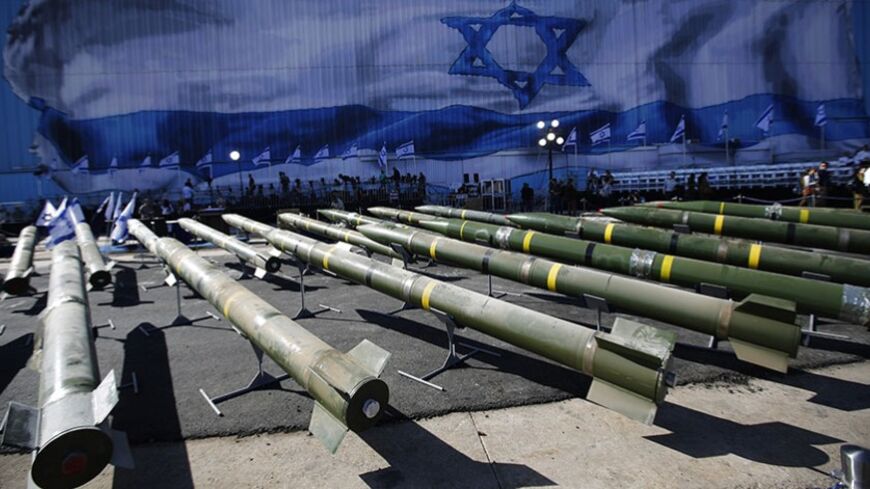 M-302 rockets found aboard the Klos C ship are displayed at an Israeli navy base in the Red Sea resort city of Eilat, March 10, 2014. - REUTERS/Amir Cohen

The photos showing Israeli soldiers seizing control of the Klos-C weapons vessel, and the sounds of congratulatory slaps on the backs of the country’s top brass, are reminiscent of the heated race to obtain “the victory photo” during the second Lebanon war in 2006. Military analyst Ofer Shelah, a member of the Knesset and of its Foreign Affairs and Defense Committee, wrote in an article published in 2011 in the Israeli daily Maariv that “a force of paratroopers was sent to the village of Bint Jbeil to fly the Israeli flag over one of the houses, to snap a picture and to withdraw.”

“The victory photo,” explained Shelah, was designed to sear the consciousness of both sides with “Israel’s undeniable victory.”

The victory celebrations following the takeover of the weapons vessel, and the display of the “Made in Iran” label on a sack of cement found in its cargo hold, were designed mostly to sear consciousness. This time the targets were the Israeli public and world public opinion. The message: Iranian President Hassan Rouhani is a tiger in sheep’s skin, and Iran was, and remains, the source of all the troubles in the Middle East and a threat to world peace, as Prime Minister Benjamin Netanyahu said at the AIPAC conference last week on March 4.

The publicity surrounding the operation, after many similar ones were kept secret, was designed, according to Netanyahu, to expose Iran’s true face as one who grossly violates international law even while conducting talks with world powers. Defense Minister Moshe (Bogie) Ya’alon also contributed extensive diplomatic analysis of the operation, saying that “despite the smiles, the Iranian regime hasn’t changed. Its strategic goals and intentions haven’t changed, nor has its activity.”

The collateral benefit, and perhaps actually the main benefit, from the weapons vessel event was the disappearance of the Israeli-Palestinian conflict and the negotiations on a diplomatic arrangement from the top of the news. When the army representative provides detailed information about the number of missiles in the ship’s hold and their range, who remembers that a day earlier the Central Bureau of Statistics reported a record number of housing starts in the settlements?

When the radio and television stations air interviews in which Ya’alon claims that the Iranians are leading the world astray, who cares that at the height of the diplomatic negotiations, Ya’alon also said that those claiming peace achievable “mislead the people,” and suggested discarding the “illusion of conflict resolution”?

The minister of defense complained that the Iranians were smuggling weapons to Gaza using subterfuge “without leaving [Iranian] fingerprints … to blur the very fact that they come from the Islamic Republic, by making an interim stop at an Iraqi port.” So what did he expect? That they would transfer the weapons through the port of Ashdod?

Israel and the Hamas government in Gaza are in a state of war. And as the saying goes, ''à la guerre comme à la guerre.'' Why should a French or Australian get excited over the seizure of weapons making their way to a region of conflict?

The founders of the Jewish state can teach the heads of the Islamic Jihad and their Iranian suppliers a thing or two about arms smuggling and its production during war, under the nose of a foreign occupier.

The web site of Palyam, the naval arm of the Palmach [the underground army of the Jewish community during the British mandate], recounts proudly how the organization bypassed the arms embargo imposed by the UN in the 1940s on the warring parties: “The arms smuggling was carried out in subversive ways and sophisticated means, under the eyes of the British. … The shipments of smuggled weapons arrived in Israel disguised as cargo on ordinary commercial vessels. Weapons acquisition ships carried out more than 50 shipments during the War of Independence, bringing in some 35,000 tons of weaponry, including heavy weapons, tanks and airplanes. … Jewish American volunteers smuggled in cargo planes from the United States. … In the production facilities, which were disguised as factories and workshops, bullets, bombs and other explosives were made.”

Since those days, Israel has become one of the world’s leading weapons exporters. The state, which Netanyahu described at the AIPAC conference in Washington as “humane” and “compassionate,” sells weapons to dictatorial rulers throughout Africa and Latin America, including Uganda and Equatorial Africa. It cooperated with South Africa under the apartheid regime and even sold weapons to the ayatollahs’ regime in Iran.

According to UN data, Israel’s defense industries exported weapons to 29 countries around the world in the past decade. Most of the deals are conducted in secret, through circuitous routes.

One should not make light of the importance of the seizure of the missile shipment, which apparently was designed to arm the terror organizations in the Gaza Strip, to the security of Israel’s citizens. But between this, and describing this weaponry as a “tie breaker,” in Netanyahu’s words, is like the distance between the Israeli nuclear facility in Dimona (according to foreign sources) and the Iranian nuclear facility at Bushehr. Ya’alon, speaking at a formal ceremony several weeks ago, on Jan. 27, said, “There’s no doubt the IDF is the strongest military in the Middle East.” How, then, can one “break a tie” when there’s no tie? Even if one doesn’t take into account the reports from foreign sources about the nuclear bombs in Israel’s possession, several dozen rockets do not change the balance of power between the IDF and the Arab and Iranian armies.

“The victory photo” of the ship being led into the port of Eilat to the sound of a cheering crowd, will not change the balance of power in world public opinion between the Israeli occupier and the Palestinian occupied. This image will not influence the attitude of the six world powers toward Iran, either. Most importantly, the military operation and the attendant PR campaign will not advance Israel’s fundamental interests one iota: The change in the balance of power between the peace camp and the rejectionist organizations in the territories, an end to the conflict with the Arab states, ensuring the democratic and Jewish character of Israel, and curbing the erosion of its international standing.