In an exclusive interview, the United Kingdom's Minister of State for Foreign and Commonwealth Affairs Hugh Robertson said that further militarization is not the way to end the Syria war. 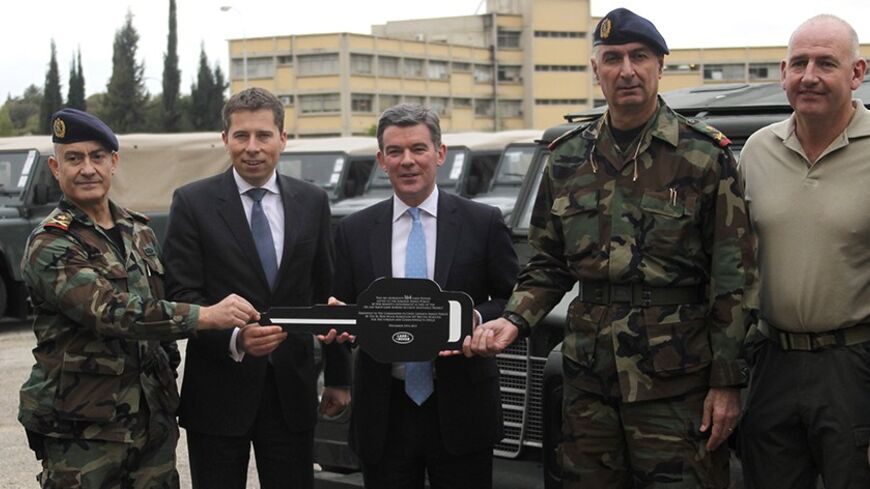 Members of the Lebanese army stand with the British ambassador to Lebanon, Tom Fletcher, and Hugh Robertson, British secretary of state for the Middle East and North Africa, as they give the aid to the Lebanese army in Kfarshima, east of Beirut, Dec. 10, 2013. - REUTERS/Sharif Karim

AMMAN, Jordan — Hugh Robertson, Britain’s minister of state for foreign and commonwealth affairs, has opposed calls to arm the Syrian rebels, instead insisting that all sides need to return to the negotiating table.

“Generally speaking if you want to end a war, arming both sides is not the way to do it,” he told Al-Monitor in an exclusive interview on March 26, on the sidelines of his tour of Syrian refugees in Jordan.

Robertson noted that Britain has additional motivation for peace because of the presence of some 400 British jihadists that are fighting in Syria. “This increases the importance of a political settlement in Syria. Without it, there will be instability, which will increase extremism and bring about an increase of jihadists.”

On the Palestinian peace process, Robertson noted that his government does not recognize Israel as a Jewish state and does not back demands for Palestinians to do so.

Robertson admitted that the Israeli siege on the Gaza Strip amounts to collective punishment, but laid the blame for the humanitarian situation on Hamas, which he called a “terrorist” organization. “The single best thing to alleviate the situation in Gaza is to have progress in the peace talks,” he said.

Talking about US President Barack Obama’s visit to Saudi Arabia, Robertson stressed the need for the West to “stand by our traditional allies” in the Gulf, noting that Gulf states felt an “existential threat” posed by Iran’s nuclear program.

When asked if success over Iran’s nuclear talks would result in greater pressure on Israel over its nuclear program, Robertson said it had not been mentioned.

Al-Monitor: President Barack Obama met with European leaders and reiterated that what happened in Crimea is a violation of international law. Does the same position apply also to the occupied Palestinian territories? Will the same standards being applied to Russia also be applied to Israel?

Robertson: I will answer the first half of your question. There is a UN resolution coming up in the [UN] General Assembly that will deal with the issue of territorial integrity. We would strongly encourage everyone to sign up for that UN resolution. In terms of what is happening in the occupied Palestinian territories, the British position has been clear for some time, we support the two-state solution, based on the 1967 borders, with agreed land swap adjustments. The key thing is that the [US Secretary of State John] Kerry process is alive. It is at a critical juncture, this will not be easy for either side. We believe that this is the best show and only show in town, and we encourage everybody to get behind that initiative.

Al-Monitor: But at the same time, British Prime Minister David Cameron visited Israel and Palestine and gave a pro-Israeli speech at the Knesset, which upset many Palestinians. So how can the British equilibrium between the sides hope to be maintained following such a speech?

Robertson: There are strong connections between the United Kingdom and Israel. The prime minister went despite a heavy schedule. He prioritizes the visit to Israel and the occupied territories and this is a sign of how seriously he takes the Middle East peace process. We should not read too much in any individual speech. The message he carried is that the Kerry process is the only show in town.

Al-Monitor: Is Europe waiting to see where the Kerry process will lead?

Al-Monitor: The Arab League summit communique said that Arab leaders are opposed to the idea of recognizing Israel as a Jewish state. What is Britain’s view on this issue?

Robertson: The UK has not recognized Israel as a Jewish state. With a little bit of imagination, you can find a formulation of words that gives the Israelis the security that they need and gives Palestinians what they want.

Al-Monitor: Whenever there are talks about Israel as a Jewish state, Palestinian citizens of Israel note that they are disenfranchised and discriminated against. Do you think that your position in opposing a “Jewish Israel’ will bolster their demands for equality?

Robertson: Any formal peace process requires give and take on both sides. If you look at them, you will say someone got slightly more on this and someone more on that. We recognize the Israeli security needs as well as the needs of Palestinians.

Al-Monitor: Are you suggesting that there is symmetry in this conflict?

Al-Monitor: The people of the Gaza Strip continue to suffer as a result of the Israeli siege. Does the international community have nothing to offer to the people of Gaza to relieve them of this terrible humanitarian crisis?

Robertson: The situation in Gaza is dire, I have not been able to get there, but all the reports indicate that. The single best thing to alleviate the situation in Gaza is to have progress in the peace talks. The Hamas government in Gaza has a problem with the Palestinian Authority in Ramallah, the Egyptians and the Israelis. The Hamas leadership has done harm to their own people.

Al-Monitor: Is it not still collective punishment for the people in Gaza?

Robertson: It is, but they are the people that elected their government.

Robertson: I understand your question, but Hamas is a terrorist organization.

Al-Monitor: The Syrian government continues to make military gains and is growing more confident, while the political opposition struggles and Islamist rebels fight each other. Has the West given up on finding a secular, moderate force among the opposition? Are Britain's priorities now focused on counterterrorism and the potential jihadist threat to Europe?

Robertson: You can’t separate the two. There is a clear threat to the United Kingdom. There are jihadists there, around 400 [Brits] that are being radicalized n Syria. This increases the importance of a political settlement in Syria. Without it, there will be instability, which will increase extremism, which brings about an increase of jihadists.

Al-Monitor: Has the Russian position regarding Syria been weakened because of their actions in Ukraine?

Robertson: No, I don’t think so. No sign anywhere that as a result of what happened in Ukraine that Russia is disengaging their position in other parts of the world. Russia is big enough and sophisticated enough to be able to deal with more than one dispute at the same time. All indications we receive is that the Russians absolutely understand the need for a political settlement in Syria between moderate elements in the opposition and moderate elements in the government as the most likely formulation.

Al-Monitor: Are you suggesting that a Geneva III is needed now?

Robertson: Yes I am, whatever you call it. I believe a political process is needed now. If you call it something else, it will not terribly worry me. What is important is to find another way forward.

Al-Monitor: So you don’t buy the demands of the rebels that they should be armed with sophisticated weapons?

Robertson: Generally speaking, if you want to end a war, arming both sides is not the way to end the war.

Al-Monitor: All eyes are on President Barack Obama's visit to Saudi Arabia. Saudi Arabia has made its anxieties about US policies in the region quite public. Up until now, differences seem to remain as the United States and Europe push ahead with nuclear talks with Iran. Are we witnessing a gradual Western shift from its traditional alliance with Saudi Arabia in realization of conflicting regional interests?

Robertson: No, I think in a sense that what is happening with the negotiations in Iran show the need for further talks. At the same time, it requires of us to be in the Gulf and stand by our traditional allies. It shows why relations with Saudi Arabia and other GCC [Gulf Cooperation Council] countries is important. We need to meet and talk about all the issues. When I was there, it was clear the existential threat that they feel.

Al-Monitor: Should a nuclear deal with Iran succeed, can we expect more Western pressure for greater transparency into Israel's nuclear program with the goal of producing a nuclear-free Middle East?

Robertson: In all the discussions and all the paperwork with Iran, Israel was not mentioned. Negotiations have been around the Iranian facilities, dimensions and so on and sanctions and diplomatic relations. At no stage have I seen any link with Israel.

Al-Monitor: Lebanon is facing serious economic and political problems. They have presidential elections coming up. What would you like to see in the next president?

Robertson: It is not for a politician from a third country to tell people in Lebanon what to do. But what we would want in the president of Lebanon, in addition to enjoying the full support of his people, is somebody who is able to bring stability in a country that is facing a challenge. I was in Lebanon before Christmas. It is noteworthy that 25% of the population of Lebanon are refugees of one kind or another. That is not the basis for a country that wants to be stable. I wish anyone who wants to be president well, but it is really important that they enjoy the confidence of those around them. Lebanon is a remarkable country, it has enormous natural assets in so many places. I wish we can stop talking about Lebanon as a place of conflict.

Al-Monitor: Should the next Lebanese president come from the military?

Robertson: No I don’t. It is not always true that a military person can bring stability. We know about March 14 and March 8, what we need is a political operator, a person who can bring people together and crucially to bring stability. If you want to know what British foreign policy is in Lebanon, it is helping Lebanon achieve stability.

Robertson: Jordan is our key ally in the region. I had a meeting with Nasser Judeh, the foreign minister, and we agreed on absolutely everything. The relations between the UK and Jordan are close indeed. I went to parliament and spent time with the speaker and also met with a delegation of female members of parliament from the Arab world. Jordanians are fired up by the process and what can be achieved. There is an impressive woman, Wafa Bani Mustafa, and there is no sense that the reform process is over. She has a very strong point of view as to where we are going.

Al-Monitor: Freedom of expression is seen to be backtracking in this part of the world, especially Egypt where journalists are being criminalized for doing their job. Where does the UK stand on press freedom?

Robertson: When the journalists of Al Jazeera were arrested, the foreign office made a strong statement and we made the same point also here with the Jordanian government about the importance of freedom of expression.