Hamas officials deny they had anything to do with the messages allegedly sent by the party's military wing, the Izz ad-Din al-Qassam Brigades. 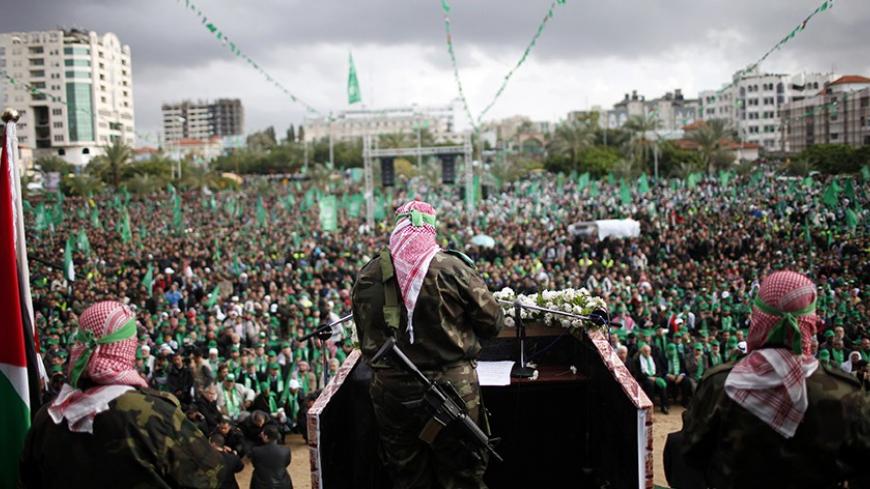 A member of the Izz ad-Din al-Qassam Brigades, the armed wing of the Hamas movement, gives a speech during a rally in Gaza City, Dec. 8, 2012. - REUTERS/Ahmed Jadallah

GAZA CITY, Gaza Strip — More than 60 Palestinian, foreign and Israeli journalists who work with foreign media outlets in Israel and Jerusalem received threatening text messages on their Israeli mobiles on Saturday night, March 22. The messages were in both Arabic and English, and included the name of the Izz ad-Din al-Qassam Brigades, the military wing of the Hamas movement.

Josef Federman, news editor at The Associated Press' Jerusalem bureau, said that at about 8 p.m. Saturday he received four text messages in Hebrew and English on his Israeli number which contained threats.

Speaking to Al-Monitor by phone, Federman said that the four messages contained various statements, including: "In the coming war, the Palestinian territories will be recovered," "Hamas has promised to retaliate, and there will be retaliation," and "the al-Qassam [brigades] have chosen you to be the next Shalit … get ready." He noted that the sender did not appear on the phone as a number, but rather was registered as "Kill you."

Federman explained that, at first, he felt concerned about these strange messages. He then contacted his colleagues from the AP bureau and discovered that they had received the same messages, so he felt that it might be some kind of spam.

"The next morning I contacted other foreign news agencies and discovered that the messages had been sent to a number of other journalists. Thus, I knew that I was not a target and that these were not personal messages. However, they were certainly not random messages, because more than 60 journalists submitted complaints to the Foreign Press Association (FPA), in which I am a member of the board of directors," he added.

Federman said it was likely that whoever sent these messages obtained the numbers from the directory published by the FPA, adding, "but I cannot be sure of that."

"We're not sure who did this, but it seems to be someone who has ties with Hamas, based on the content of the messages. The name 'al-Qassam' was mentioned more than once," he noted.

The FPA strongly condemned the messages, explaining that a series of texts were sent to the mobile phones of more than 60 foreign correspondents and journalists working with foreign media outlets.

In a statement issued on its website on March 23, the FPA said that messages appear to have been sent from a carefully selected database formed by the military wing of Hamas, the al-Qassam Brigades, and that these messages included direct threats to members of the association.

The FPA said that this act is unacceptable, since journalists are not part of the conflict in the Middle East. The association called on the Hamas government to take steps to ensure that this would not happen again.

Security sources, who spoke to Al-Monitor on condition of anonymity, said that these messages came after a breach of an Israeli military website, noting that they came as part of the psychological war waged by the al-Qassam Brigades against Israel.

The sources added that these texts are part of a series of messages to the Israeli Defense Forces, that began with a news conference held by al-Qassam Brigades on March 20 concerning a large tunnel, and included a video that showed Defense Minister Moshe Ya’alon within the range of al-Qassam snipers while he was at a location adjacent to Gaza.

A spokeswoman for the Gaza government, Israa al-Mudallal, condemned the messages, but said her government was not responsible. "We will not apologize for these messages, because we are not responsible for them. No one has claimed responsibility and they could have been sent by unknown groups that want to frame the resistance and the government, which have always maintained a relationship of trust with foreign journalists," she told Al-Monitor.

"We condemn these messages and reject intimidating or threatening any independent journalist. We in the Gaza government are not afraid of the press, and we welcome all journalists in the Strip. We have become more flexible with regards to procedures for [journalists] to come to Gaza and in giving them residency papers," she added.

During a meeting with Al-Monitor at the government's media office, Mudallal said that these messages are an immoral act against journalists, who have nothing to do with the ongoing conflict. "We respect the resistance and its goals, and believe that these messages are a type of conspiracy targeting journalistic work in the Gaza Strip, as [journalists] are the only ones capable of relaying the suffering," she added.

Mudallal stressed that while she is not part of a security agency in the government, she can confirm that the Palestinian government ensures the protection of these journalists and their equipment while they are in the Strip. "It should be noted that no faction in Gaza claimed responsibility for these messages, which were sent to journalists outside the borders of the Gaza Strip. Thus, we bear no responsibility for them," she added.

Regarding the mechanism by which the messages were sent, a cyberexpert who requested anonymity given the sensitivity of the issue, told Al-Monitor that these messages were sent to journalists by a method known as "bulk SMS [Short Message Service]." This was not a form of piracy, since piracy involves unpublished information, and the numbers of these journalists were certainly known, according to him.

The expert confirmed that there are international companies in countries such as China and Malaysia that sell packages of messages at a price much lower than domestic prices, and without any form of censorship on the content or sender's name.

"Technological development has resulted in the presence of a form of black market for buying messages. In just a few seconds, you can enter the site of one of these companies and buy packages of messages via a Visa card. You can select the sender's name and the content without any censorship," he added.

Al-Monitor contacted the Palestinian mobile communications company Jawwal, which confirmed that it did not deal with message packages. According to Jawwal’s public relations department, there are five agents that deal with these packages, namely Mortaji, al-Qadwa, MTC, Hadara and World Links.

The commercial director of technology at Hadara, Aouni al-Tawil, told Al-Monitor that his company imposes strict measures on any request to buy a package of messages. The sender's name must be approved, and there is a filter for the content of the messages.

He denied that the messages came from a package purchased through his company. "There is no way that these messages were bought from our company. The name of the sender, 'Kill you,' would not have been approved. This approval must come from the mobile company, and it usually takes two days to verify the sender party," said Tawil.

In the same context, a director at World Links Information Technology Co. said that the communication companies that are responsible for the numbers the messages were sent to can trace the sources of these texts. He stressed that at World Links, they follow strict measures for anyone who wants to buy a package of messages, and there is an authorization and confirmation of personal documents.

"[The customer] must also sign a document agreeing to certain terms, the most important of which is that he or she will not send random messages. There are also filters for any unwanted messages, i.e, spam," he added.

Nevertheless, Federman stressed, "These messages will not prevent me from going to the Gaza Strip," and was joking about the poorly worded language of the messages, which were full of grammatical mistakes.