Prominent evangelical Christian leaders are gathering in Bethlehem for the third Christ at the Checkpoint Conference, prompting Israeli concerns of a drop in support from a traditional ally. 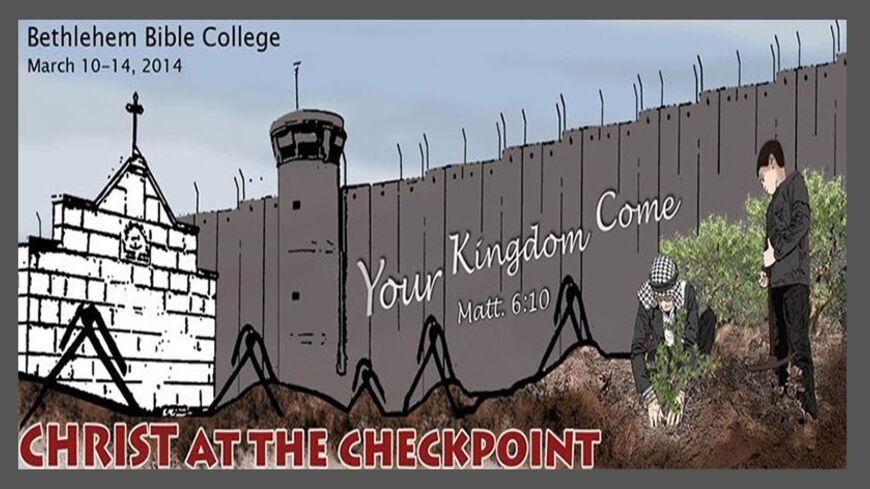 The third Christ at the Checkpoint Conference at the Bethlehem Bible College is expected to host the “widest and most diverse” group of evangelical Christians, according to conference organizers. - www.christatthecheckpoint.com

A Palestinian college in Bethlehem will host a weeklong conference aimed at weakening the traditional evangelical support to Israel, despite strong Israeli pressures.

Participants will hear leading world evangelicals critique traditional pro-Israeli Christian theology, interact with fellow Palestinian Christians and take note of the suffering that Israel and its occupation is causing for Palestinians.

A survey by the Pew Research Center in October 2013 showed that in the United States, “White evangelical Protestants are twice as likely as American Jews to favor stronger US support for Israel and 82% say that God gave Israel to the Jewish people.”

Israel’s Foreign Ministry seems to have been caught off guard with the large number and high caliber of conference speakers and attendees. It issued a last-minute sharply worded advisory on the eve of the conference that calls the Palestinian sponsored event “problematic” and threatens potential visitors not to attend or else they will be “targeted” by Israel and its supporters. Israel’s Foreign Ministry called the event “particularly problematic, because it is designed for the evangelical Christian leadership — an extremely important audience to us,” an unnamed Israeli Foreign Ministry official told the right-wing Israel Today.

The statement goes on to say, “Using religion for the purpose of incitement in the service of political interests stains the person who does it with a stain of indelible infamy.” And in case the carefully worded statement was not clear, the Israeli paper blatantly explains that those attending the Christian conference “are marked both figuratively and as a focus of further action” by Israeli authorities. Conference organizers did not respond to a request from Al-Monitor for reaction to the Israeli Foreign Ministry statement.

The official Israeli statement followed attacks on the conference from Israel and from pro-Israeli supporters in the United States.

In a blog on the Jerusalem Post website, Yisrael Medad, one of the most prolific Israeli right-wing speakers and ideologues, blasted the conference: “That Christ at the Checkpoint Conference is pure anti-Israel, anti-Zionist and also promotes misrepresentations of Judaism as well as Christianity.” In his Feb. 28 blog, Medad, an American-born Israeli commentator who has lived in the West Bank settlement of Shiloh since 1981, called the conference “dangerous and invidious.”

David Brog, executive director of Christians United for Israel, the most powerful pro-Israel evangelical group in the United States, wrote a long piece in the spring edition of the Middle East Quarterly titled “The end of Evangelical Support for Israel?” Brog outlines how major evangelical universities in the United States are shifting away from their standard pro-Israel position to either a neutral or pro-Palestinian position. He blasted the Palestinian organized conference as a forum for Palestinian suffering. “The name of the conference along with a photo of the Israel security fence that forms its logo invoke the increasingly popular meme that Jesus was a Palestinian who would be suffering under Israeli occupation today, much as he suffered under Roman occupation millennia ago.”

Conference director Munther Isaac was quoted by Ma'an News Agency as admitting that Palestinian suffering will be highlighted in the conference, but insisted that the conference will not be adopting a victimization mentality. “We want to show that here is a living, hopeful church that is looking forward despite all of the challenges.”

Those among Christian evangelicals who support Israel, including its occupation of Palestinian land, base their beliefs on the dispensationalist theology that attributes and largely justifies all present Israeli actions to biblical prophecy. Supporters of this theology, often called Christian Zionists, are being challenged theologically by many of their own theologians. They are also challenged by Palestinian Christians who, along with their brethren, are bearing the brunt of the support for the injustice meted out against Palestinians by Israel, its military force and messianic violent settlers.

Israelis and some of its genuine supporters are often perplexed at the alliance the right-wing Israelis have forged with an ultraconservative Christian stream that predicts the eventual demise of Jews in the battle of Armageddon.

The Israeli Foreign Ministry’s sharp attack and threats against participants will not deter speakers or attendees, most of whom have already arrived in Bethlehem. But the ferocity of the attacks against one of Israel’s strongest and most consistent support groups in North America exposes how fragile this disingenuous coalition is. The direct threats against evangelicals will most certainly backfire when they return to their homes and churches in the United States. The viciousness of the statement, however, reflects how disoriented Israel has become when attempting to defend its decades-old occupation.