UNRWA struggles to deliver as poverty rises in Gaza

UNRWA has again cut or halted food aid to thousands of Palestinians as it struggles to keep up with rising poverty rates due to the Israeli-Egyptian siege on Gaza and crisis situations elsewhere. 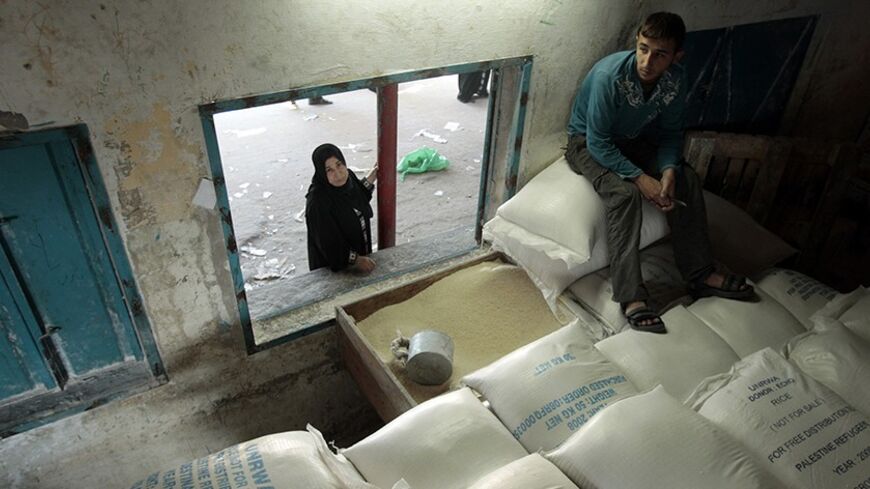 GAZA CITY — "Please note that starting in April 2014, your status will change from 'absolute poverty' to 'not poor.'" If you received this message, you might think that you had struck it rich and won the lottery. After, however, identifying the sender — the United Nations Relief and Works Agency for Palestinian Refugees (UNRWA) — and then heading to the nearest UNRWA office, you would find that it really means that the food aid UNWRA had been providing you is about to stop, because in its eyes, you are now "not poor."

This is what happened to Mohammed Jaber, 44, a resident of the Bureij refugee camp in central Gaza who must support six children in addition to his wife. His salary from the Palestinian Authority (PA) was cut off in 2007.

"I received this message on Jan. 16, 2014, at nine in the morning. At first I thought it was a positive thing, but when I went to the [UNRWA] service office in our camp, I found that they would be cutting our food aid in April of this year," Jaber told Al-Monitor.

He shared that when he stopped getting his PA salary in 2007, he began receiving extra food aid, or what is known as a "yellow coupon." Two years ago, however, this was reduced to a "normal coupon." Now even this aid will stop.

Jaber said that he and his family have been living off the assistance provided by people around them. His son enrolled in university after receiving high marks in secondary school, which means he now has to pay tuition fees. "I took all of my papers and submitted a new complaint to UNRWA, informing them that my salary has been cut off, and I'm not an employee. What do they want me to do?" he lamented.

Jaber, of course, isn't the only one affected by the forthcoming reduction. Anwar al-Maghribi, 29, a resident of Gaza City, told Al-Monitor that he works as a driver at a local company and makes 1,200 Israeli shekels ($339) a month. He pays 600 shekels ($170) each month for rent, so he has only 600 shekels left to support himself, his wife and his two daughters.

"They cut off the food assistance I had been receiving from UNRWA last October. This assistance included [a monthly allowance of] two kilograms of milk, 12 kilograms of sugar, a large bag of flour, four bottles of oil, four cans of meat and about six kilograms of rice," Maghribi said.

UNRWA spokesman Adnan Abu Hasna informed Al-Monitor that 11,000 families had had their food aid cut four months ago because of the relief agency's limited budget. "Of these families, 7,000 submitted grievances or complaints. As a result, food aid was restored to 4,000 of them after a committee examined the conditions of the families," said Abu Hasna.

He added, "The biggest effect that the blockade has had on UNRWA is the resulting collapse of the private sector and the growing number of unemployed citizens. This has affected workers in the tunnel industry in particular, and [those who work in] related industries, such as iron, metal and woodworking. This has made them come to us to request aid and work opportunities, and this exceeds UNRWA's capacities." In accordance with the international movement to wipe out poverty, UNRWA, according to Abu Hasna, is also concerned about the amount of expenses families have and whether they will be able to meet their obligations.

Abu Hasna said that the cessation of 20 UNRWA projects, totaling $60 million and providing thousands of jobs, has had a significant impact. Israel, he added, recently agreed to reinstate 12 of these projects by allowing the entry of construction materials, but eight projects remain suspended.

There are currently 833,000 refugees in Gaza receiving assistance from UNRWA, Abu Hasna shared, and within the next two months this figure will increase to 1 million refugees. During the past three years, UNRWA has launched a number of appeals requesting additional funds to support in Gaza and the West Bank.

Like Abu Hasna, the economic analyst Muin Rajab spoke to Al-Monitor about the blockade leading to the suspension of UNRWA projects involving the construction of schools and clinics, which require a large budget and the import of building materials. According to him, however, "The main reason for this crisis is that donor countries are not fulfilling their promises, which reduces the ability of UNRWA to provide services. It is worth noting that these promises are not binding. They are voluntary contributions that vary in amount from time to time due to the global economic crisis and its impact on Europe."

Robert Turner, director of UNRWA operations, in a meeting Jan. 29 with reporters in his Gaza office, said that financial support for UNRWA has increased, but there has also been an increase in the cost of projects. He also explained that UNRWA's aid problems relate to donor countries and their priorities in providing assistance. The United States, he pointed out, donates the most.

Turner told reporters that the annual general budget for UNRWA for Palestinian refugees in Jordan, Syria, Lebanon, the West Bank and Gaza Strip is $650 million, and for the current year there is a deficit of $65 million. Moreover, he noted, the budget for UNRWA's emergency programs in the West Bank and Gaza amounts to $300 million, $250 million of which is for Gaza. That budget is looking at a $20 million deficit.

In response to a question from Al-Monitor about the impact of the Syrian crisis on UNRWA's support to Gaza, Turner replied, "The Syrian crisis has cost the international community $6 billion, which is the highest such cost in history. This has had an impact on the [UNRWA] budget here [in Gaza]. Furthermore, the situation in the Philippines, Mali and Sudan has led to a reduction in Gaza's share of this competition [for international support]. The need [for aid] in Syria and the Philippines is much more than that in Gaza, which means we have a responsibility to attract more support."

After Jaber received the distressing message about the aid cut on his cellphone, he took part in a protest at an UNRWA food storehouse in central Gaza, along with hundreds of other refugees who had received the same message. This is not the only protest at UNRWA headquarters during the past three months. Palestinian refugees who came to Gaza from Syria have also organized demonstrations, as have the UNRWA workers union and temporary contract employees. All those protesting have demanded that UNRWA commit to new financial obligations at a time when it is experiencing major financial pressures and as the Israeli-Egyptian blockade of Gaza drives more and more Palestinians into deeper poverty.