An agreement by both Israel and the Palestinians to make concessions unique to their side may make it easier to arrive at a final deal. 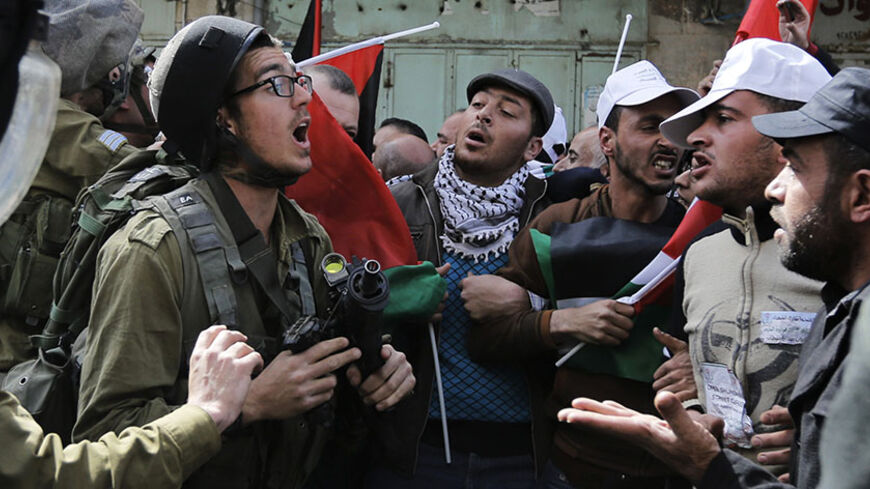 Palestinian protesters confront an Israeli soldier during clashes at a demonstration against the closure of Shuhada Street in Hebron, Feb. 21, 2014. - REUTERS/Ammar Awad

US Secretary of State John Kerry and his team seem to have a very clear idea of what they want in the ongoing Palestinian-Israeli peace talks. But the general public seems lost trying to figure out exactly what he is after.

A close and thorough analysis of publicly available information, plus knowledge of the area and the political maneuverability of the main players, leads to a deceptively simple conclusion. Kerry and peace envoy Martin Indyk are clearly not after an agreement that will end the conflict once and for all. This was the goal demanded by former Israeli Prime Minister Ehud Barak during the Clinton-led Camp David II effort, which ended in failure.

At the same time, it is clear that neither the Americans nor the Israelis want to repeat Israel's unilateral military actions in South Lebanon and the Gaza Strip, moves that were rejected by the other side, lacked international backing and failed to provide peace or quiet. Instead, it appears that the US team is after something less than a contract to end the conflict: a set of actions that both sides privately agree to and will not derail.

The idea of a unilateral agreement sounds contradictory. But if one can be reached, it would ease points of tension in the occupied territories, lessen the space that Israel commits not to further settle and slowly prepare the public for a much later deal.

Such an agreement would require that both parties do what they are able to. Israel is able to withdraw, and Palestinians can refrain from saying no. In essence, it would call for direct action from the Israelis and acquiescence from the Palestinians. The Israelis will have to implement the possible evacuation of some remote settlements and a further Israeli army withdrawal from parts of the occupied West Bank, while the Palestinians will have to prepare their public to accept this new reality and begin resolving the thorny refugee problem. Work to lower the tensions in Jerusalem will also be required. The decision by the Israeli Knesset to cancel the debate on sovereignty over the Al-Aqsa Mosque as a result of pressure from Jordan shows that Israel can do much more to ease the strain in the Old City of Jerusalem and empower the Palestinians in the holy city.

A unilateral agreement will allow every side to honestly declare to their own constituencies that they have not given up nor abandoned strongly-held convictions. Israeli Prime Minister Benjamin Netanyahu can show his hard-line Likud Party that he has not given up on a united Jerusalem, nor on most of the settlements. On the other side, Palestinian President Mahmoud Abbas will also be able to inform his Fatah Central Committee that he, too, has not given up on the dream of an independent, contiguous Palestinian state on the 1967 borders with East Jerusalem as its capital.

The Palestinian refugee issue, therefore, looms large in such a deal. The heavy lifting on the Palestinian side calls for its leadership to prepare its public for a settlement to this 60-year-old problem through giving them choices. The refugees' four options will be either to stay in the locations they are in now, move to whatever territories will constitute the state of Palestine, move to a third country or apply to Israel for permission to live in their country under a family-reunification policy.

Naturally, refugees' adjustment to a permanent home will be also sweetened with appropriate compensation. As Palestinian Foreign Minister Riyad al-Malki told Al-Monitor Feb. 10, an international fund will be set up for individuals and countries to apply to. Individuals will be awarded monetary reimbursement for years of pain and suffering as refugees as well as for documented property that was lost during the wars. Neighboring Arab countries who have hosted Palestinian refugees on their land will also be compensated. It is unclear whether the Palestinian demand that Israel publicly accept historical and moral responsibility for having created the Palestinian refugee problem will be met. Israel had previously refused to make such a declaration for fear it would translate into a huge financial cost. This issue might be finessed in the same way as were Netanyahu’s demands of recognizing Israel as a Jewish state, by having it noted in the framework agreement and allowing the parties to register reservations about it.

A unilateral agreement will not be binding, nor constitute an official end to the conflict. In essence, it will be an unofficial interim agreement, a term that Palestinians resoundingly reject.

The power of such an understanding will depend on detailed and meticulous steps that both sides must follow. The United States would find itself in the unenviable position of not only guaranteeing such an agreement, but continuing its intense diplomacy until all the public and private components are implemented. Following such an implementation, the next step might be to reach a final peace agreement. Whether this will take place during the Obama-Kerry era is hard to predict.