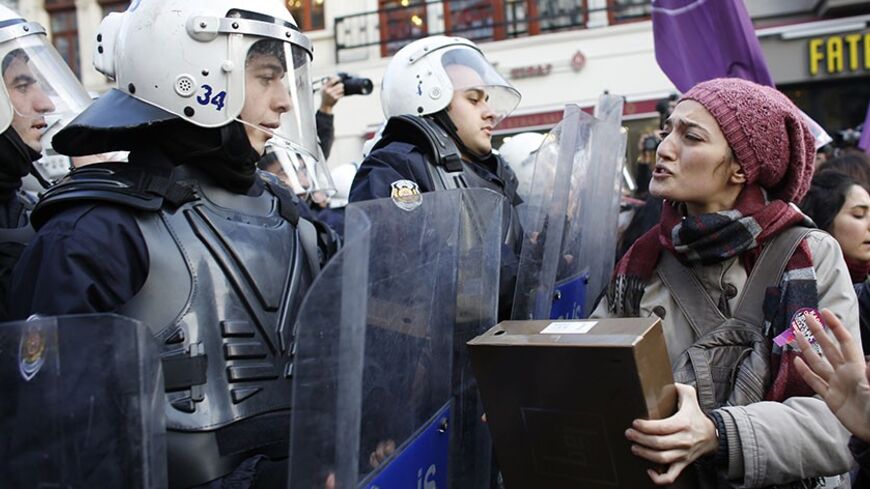 An activist for women's rights argues with riot police during a protest in Istanbul, Jan. 5, 2014. - REUTERS/Murad Sezer

ISTANBUL — Turkey is failing to protect women from domestic violence, rights activists say. While International Women’s Day on March 8 approaches, women’s groups in Turkey are stepping up their criticism of the government, which they say is not doing enough to stop the beating and killing of women.

March 8 also marks the second anniversary of the adoption of a law against domestic violence passed by Turkey’s parliament in 2012. At the time, the law was hailed by the government as a “present” to women, designed to fight violence against women by making it easier for victims to receive police protection when under threat.

But activists say the law had not fulfilled expectations. “Unfortunately, we don’t see an improvement, but a deterioration,” Zelal Ayman, coordinator at Women for Women’s Human Rights - New Ways, a rights group in Istanbul, told Al-Monitor. “It is a problem that threatens half the population,” she said about violence targeting women. “It is a horrible thing.”

According to Turkey’s police, 61 women were killed by their husbands or lovers last year, but an unofficial count by the web portal Bianet put the death toll at 214. Turkey’s main opposition party, the Republican People’s Party (CHP), said the number exceeded 800.

The police said 13 of the victims had alerted authorities to the danger facing them and had received state protection by court order. A total of nearly 6,000 women were under protection last year, the police added. Protection measures included electronic ankle bracelets to implement restraining orders against offenders.

But that has not stopped the violence. Bianet reported 23 women were killed in incidents of domestic violence last month alone. The website said 853 women have been killed in Turkey since the start of the decade. Bianet also counted 167 cases of rape or attempted rape of women or girls in 2013.

Polls suggest that almost 40% of women in Turkey suffer domestic violence at least once in their lives. Women’s rights activists say the state is not living up to its pledge to shield women, despite the introduction of panic buttons to alert the police and plastic surgery and new identities for some victims.

In Sakarya, a province southeast of Istanbul, activist Tevhide Yagan told Al-Monitor the legal framework was not the reason for the undiminished violence. “The laws are OK, but there are problems with implementation,” said Yagan, president of the local chapter of the Turkish Women’s Union, a rights group.

Yagan said Sakarya, a province of 900,000 people, had only one women’s shelter with a capacity to house 10 victims of domestic violence. Some Turkish provinces have no shelter at all, despite laws that make the opening of such sanctuaries mandatory.

Ayman, the Istanbul activist, said while legal improvements in recent years should be applauded, laws were not enough to change the situation. “If the government is really serious about gender equality, it has to spread that mentality through the state hierarchy, to the police, the judiciary and religious authorities.”

She said she did not see that determination at the moment. “If a police officer who failed to protect a woman were punished, no officer would behave that way.” Strong conservative traditions about the role of women as “servants in the family” who are not supposed to leave the house were also a factor, Ayman added.

That mix of problems puts women at risk, activists say. Earlier this month, We Will Stop Violence Against Women, another rights group, staged a vigil outside a court in Istanbul to draw attention to a case that it said symbolized the dangers facing women.

Inside the courthouse, Serdar Gocmen, 32, faced murder charges for killing his wife, Muhterem, 31, in an Istanbul barbershop last year. According to news reports, Muhterem had left her husband and filed for divorce, but Gocmen pressed her to return to him. She turned to the authorities, who issued a restraining order against Gocmen, telling him to keep a distance of at least 200 meters (219 yards) from his wife.

Ignoring the order, Serdar went to speak to his wife in the barbershop where she worked. When she called the police, he was briefly detained but released. He went back to the barbershop and stabbed his wife several times with a knife in front of co-workers and customers. The state prosecutor in the trial has called for a prison sentence of up to 24 years against him.

The government says it is conducting studies to see what can be done to improve the situation. “We are revising all strategies on murders of women,” Family and Social Affairs Minister Aysenur Islam told the Haberturk news channel earlier this month, according to a transcript of the interview posted on her ministry’s website. “We will obtain data. We will see if we have to revise our measures, it will show us how we should make changes and what we should change,” she said.

by Murielle KASPRZAK and Joseph SCHMID | AFP | May 26, 2022
END_OF_DOCUMENT_TOKEN_TO_BE_REPLACED