Turkey defers to Baghdad on oil from Iraqi Kurdistan 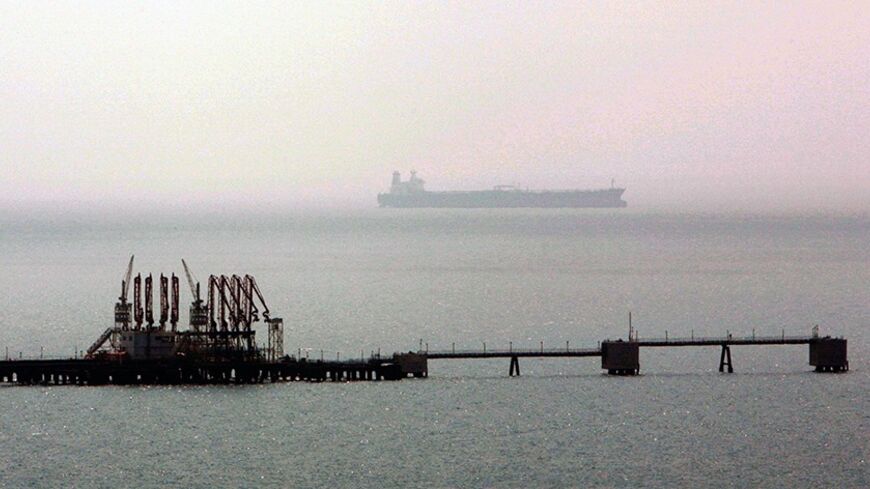 A tanker sails in the Mediterranean past a jetty at the Ceyhan crude oil terminal near Turkey's southern coastal city of Adana, July 13, 2006. - REUTERS/Fatih Saribas

With hundred of thousands of barrels of its oil stuck in the Turkish Mediterranean port of Ceyhan, unable to be sold on the world market because of its continuing row with Baghdad, the Kurdistan Regional Government (KRG) is discovering just how landlocked and boxed in it is in terms of utilizing the vast oil reserves under its control.

KRG Prime Minister Nechirvan Barzani shuttled between Istanbul and Baghdad again in the last few days in a fresh attempt at overcoming the problem, but with little apparent success. Baghdad appears determined to stick to its guns and prevent the KRG from selling oil from northern Iraq unilaterally, saying this violates Iraq’s constitution.

Baghdad also has support from Washington, where administration officials fear the energy cooperation between Turkey and the KRG will increase the risk of splitting up Iraq — already in the throes of sectarian strife — and are consequently putting pressure on Ankara over its energy dealings with the Iraqi Kurds.

Iraq's constitution says oil revenues, regardless of where the reserves are located in the country, have to go through Baghdad and allocates the autonomous Kurdish region 17% of total revenues.

Nouri al-Maliki's government argues that the KRG can only export its oil after an agreement is reached between Erbil and Baghdad on how to proceed in this matter.

Baghdad has also threatened to cut the KRG out of its share of Iraq’s vast oil revenues, should it go ahead and sell its oil unilaterally.

Iraqi Oil Minister Abdul Kareem Luaibi told Reuters in January that the government would take legal action against Turkey and consider canceling all contracts with Turkish firms if Ankara enabled the exporting of KRG oil before an agreement between Erbil and Baghdad is reached.

Such an agreement, though, has been elusive because of Kurdish claims of sole ownership over oil reserves discovered in northern Iraq after the region gained political autonomy from Baghdad following the US invasion in 2003.

KRG officials are disappointed that a comprehensive package of agreements they signed with Turkey in November 2013 has not become fully operational yet.

The package includes an agreement on multibillion-dollar oil pipelines connecting northern Iraq with Turkey, which would enable the KRG to eventually export up to 2 million barrels of oil per day when fully implemented, making it an important regional energy player independent of the central government.

Currently the KRG is using the existing pipeline from Kirkuk — which technically remains under Baghdad’s control — to Ceyhan where Turkey has a storage capacity of 2.5 million barrels set aside for Kurdish oil. As of December, when the KRG’s connection to the Kirkuk pipeline was opened, the 425,000 barrels of Kurdish oil has been stored in Ceyhan waiting to be sold on world markets.

In the meantime, the KRG has been trucking small amounts of crude oil to Turkey for domestic consumption, but this is considered to be negligible compared with the potential that exists if the proposed system of pipelines is fully up and running.

Ankara nevertheless appears reluctant to aggravate the situation with Iraq further given the increasing instability and turmoil in the region due to the Syria crisis, which has also left the two countries facing similar threats, especially from radical jihadist groups such as the Islamic State of Iraq and al-Sham (ISIS).

There is also the estimated trade of about $12 billion annually between Turkey and Iraq that experts say has to be factored in by Ankara. Foreign Minister Ahmet Davutoglu visited the Iraqi capital in November for talks designed to smooth the path for a rapprochement between the sides and to lay the groundwork for a visit by Erdogan to Baghdad and Maliki to Ankara.

Those visits have yet to occur, however, and this may be an indication that differences remain which still have to be ironed out. Meanwhile, Iraqi officials are said to be still suspicious of Turkey’s intentions.

"Turkey must now choose either to turn its back on Baghdad and go ahead with its deal with the Kurds, or suspend direct exports from the region until an agreement is reached between the central government and Erbil," Reuters quoted an unnamed Iraqi official as saying in January.

"Unfortunately, facts on the ground show that Ankara eventually will go ahead with its deals with the Kurds at the expense of its relations with Baghdad," the official added.

Iraqi suspicions increased after media reports in Turkey indicated that the first batch of KRG oil in Ceyhan, worth $90 million, had been sold through the Trans Petroleum Co. in Singapore without approval from Baghdad.

Ankara, however, has denied these reports. “Even if a barrel of oil had passed through Ceyhan, Baghdad would have been informed of this and a daily receipt would have been given to the central government noting how much of a sale was made,” Turkish Energy Minister Taner Yildiz told members of the Petroleum Platform Association in the city of Kayseri on Feb. 17.

“This is Iraq’s oil, not Turkey’s. Thus, Baghdad will be informed, because it is an issue related to Iraq’s income. So far, there has not been any oil that has gone through Ceyhan, but this does not mean it won't be transferred in the future. We’ll share all information with Baghdad,” Yildiz added.

Barzani arrived in Istanbul on Feb. 14, where he held talks with Erdogan and Yildiz to see how the problem could be overcome. Two days later, he was in Baghdad for talks on the topic, which reportedly produced little, if any, results.

The KRG and the central government have failed to resolve their differences despite a US-sponsored "seven-point agreement" signed between Barzani and Maliki in April 2013.

Tellingly, though, the sides were not prepared to give the impression of a breakdown in talks after Barzani’s failed mission to Baghdad this week. “Iraq’s Prime Minister Nouri al-Maliki and KRG Prime Minister Nechirvan Barzani emphasized the importance of reaching an agreement over the outstanding issues between the Kurdistan Region and Iraq," a statement from Maliki’s office in Baghdad said later, indicating that the talks would go on.

Meanwhile, there are those who argue that the KRG and Baghdad are actually making progress. Reuters quoted Mehmet Sepil, the president of Anglo-Turkish firm Genel Energy, on Feb. 6 as saying, “We have never been this close to a deal." Sepil added, "The issues that caused an impasse have been identified. There's been quite a bit of progress made."

While the KRG and Baghdad remain locked in tough negotiations, the Kurdish media are reporting that the KRG is ultimately relying on the presence in northern Iraq of giant international oil companies, including ExxonMobil of the United States, Total of France and Gazprom Neft of Russia, to alter the picture to the KRG’s advantage.

“These companies are so powerful that they can change national policies,” the English-language edition of the Kurdish daily Rudaw reported on Feb. 17, also indicating that “from the very beginning of the row (with Baghdad) it has been obvious that, one way or another, Kurdish oil will flow overseas.”

The Financial Times, in a report on Jan. 26 bound to have displeased the Kurdish leadership, indicated, however, that although Kurdish crude is now flowing to Ceyhan, where it is being stored, major oil companies are shying away from responding to the KRG’s call for bids for this oil.

“We will not be involved in KRG tenders until we have a much better understanding of the ramifications for our relationship with Iraq,” the paper quoted an unnamed senior executive from what it said was one of the world’s largest energy companies.

It's “obvious that, one way or another, Kurdish oil will flow overseas,” as Rudaw put it, but it seems that this will not be exclusively on Kurdish terms if the emerging picture is anything to go by.