Saudi Arabia has recently taken steps to discourage its nationals from joining jihadist forces in Syria, as it plans an appeal to US President Barack Obama to become more engaged in Saudi-backed efforts to overthrow Syrian President Bashar al-Assad. 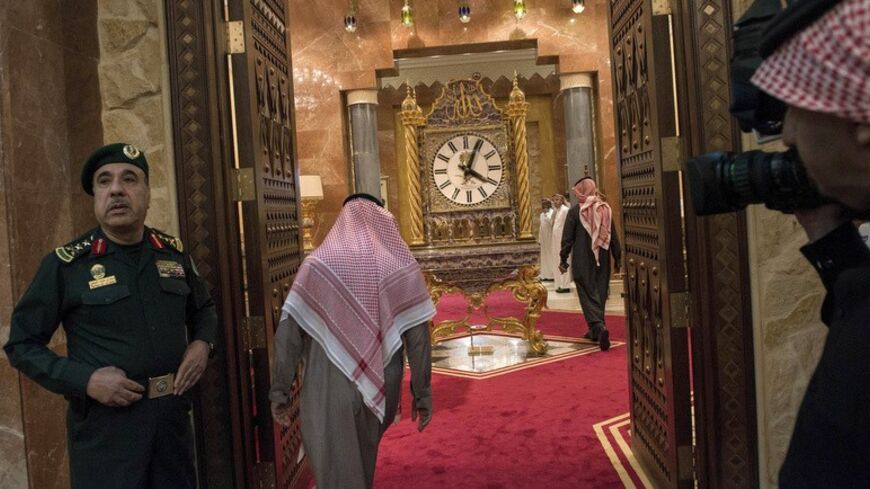 People arrive for a meeting between King Abdullah of Saudi Arabia and US Secretary of State John Kerry in Rawdat al-Khuraim, Jan. 5, 2014. - REUTERS/Brendan Smialowski

Saudi Arabia is belatedly taking steps to discourage Saudi citizens from traveling to Syria to join al-Qaeda in the war against Bashar al-Assad’s regime. King Abdullah this month issued a royal decree banning travel abroad to join jihadist movements, and imposing jail terms of up to 20 years for violating the decree.

Estimates of the number of Saudis fighting in Syria range as high as 2,500. Some are hardened veterans of earlier jihads in Afghanistan, Bosnia and Iraq. A few are compatriots of Osama bin Laden. Others traveled to Syria from the kingdom, despite individual travel bans imposed for dissident activities at home. Some traveled directly through major Saudi airports, leading many observers to conclude they were encouraged by the authorities to leave the kingdom and go fight Assad. For over two years, the Saudi government seemed to turn a blind eye to travel by its citizens — even political dissidents — to Syria.

The royal decree has now been endorsed by Crown Prince Salman, the Council of Ministers and some senior Wahhabi clerics. Similar legislation is under review in Kuwait, which has also sent several hundred fighters to Syria and is a major source of private funding for Jabhat al-Nusra, al-Qaeda’s official arm in Syria. Some Saudi sources claim that up to 20% of the Saudis who went to Syria have now come home, and the Saudi press has lauded the government for assisting their return.

Saudi sources cite two reasons for the change in policy. First is pressure from Minister of Interior Prince Mohammed bin Nayef, who has led the fight inside the kingdom for the last decade against the al-Qaeda underground there. He is also a major figure in the Saudi campaign against al-Qaeda in the Arabian Peninsula based in Yemen, which is a joint Saudi-Yemeni group. Prince Nayef knows the danger of coddling jihadists directly; they almost assassinated him a few years ago. It is likely the Ministry of Interior discovered evidence of plotting by Saudi jihadists in Syria to carry out attacks inside the kingdom similar to those carried out in 2004 to 2006 by Saudis returning from Afghanistan.

The upcoming visit by President Barack Obama to the kingdom in late March is the second factor behind the new policy. King Abdullah will make a major push for a more vigorous American effort to oust Assad when he hosts Obama. The Saudis have been openly disappointed that Obama has not used force to get rid of Assad or provided more assistance to training and arming the Syrian opposition. By taking steps to curb Saudi help to al-Qaeda and Jabhat al-Nusra, the king hopes to disarm American concerns that the kingdom is naively helping terrorists gain a stronghold in Syria. Prince Nayef just visited the White House last week for meetings with national security adviser Susan Rice and assistant to the president for homeland security and counterterrorism, Lisa Monaco. The meetings were preparations for the president’s trip. The same issue of foreign fighters traveling to Syria came up in Obama’s meeting with Jordanian King Abdullah in California on Feb. 14. Hundreds of Jordanians have joined Jabhat al-Nusra.

Saudi King Abdullah has a special attachment to Syria and has tribal and marriage connections to the country. He has been appalled at the gruesome bloodshed and the horrific cost of the civil war. He blames Washington for not doing more to stop the war, oust Assad and put in place a Sunni government that will break with Iran and Hezbollah. He would like Syria to become a Sunni base for toppling Hezbollah dominance of Lebanon.

The Saudi point man on Syria for the last three years has been intelligence chief Prince Bandar bin Sultan. Ironically, Bandar was a key player in helping Assad consolidate his power with the Alawite generals who run Syria when his father Hafez died in 2000. Some sources suggest the failure to get rid of Assad has cost Bandar influence with the king. A rising player is the king’s son, Prince Mutaib bin Abdullah, who became last year the first ever minister of the Saudi Arabian National Guard — elevating command of the kingdom’s elite praetorian security force to the level of a ministry. Mutaib is an important player in the kingdom, an up-and-comer who has taken on more diplomatic missions recently, including rallying support for the Saudi opposition in Europe. The National Guard was commanded by Abdullah from 1962 until 2010.

It is too soon to evaluate how effectively the new Saudi policy toward its own nationals’ journey to jihad will be enforced, or what real impact it will have on the Saudis already in Syria. Several Saudis are senior commanders in Jabhat al-Nusra and very unlikely to come home. Sympathy for the war against Assad is deep and broad in the kingdom, and many young men feel an obligation to go abroad to fight for jihadist movements. Like al-Qaeda in the Arabian Peninsula in Yemen, the al-Qaeda stronghold in Syria is likely to be a concern for Saudi counterterrorism officials for years to come.