The wave of unrest and chaos in Egypt has given an opportunity for thieves to loot many of the country’s museums. 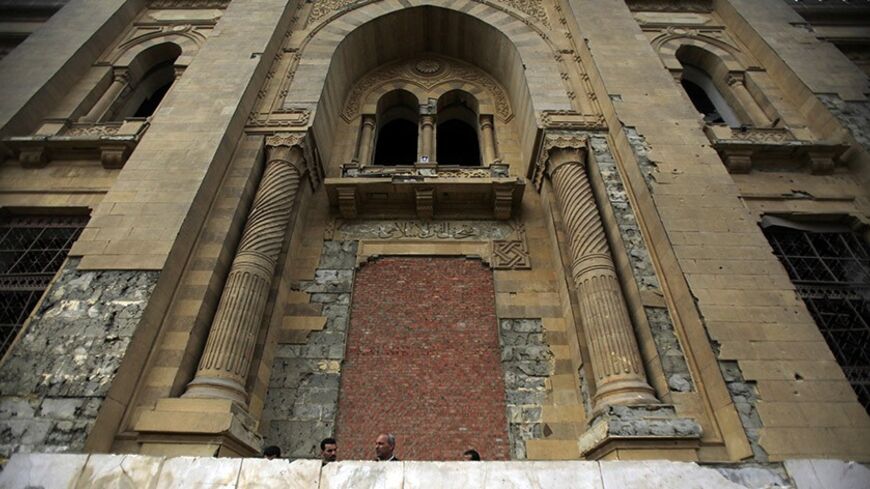 Guards watch the main gate of the closed Islamic Art Museum, which was damaged by a car bomb attack targeting the nearby Cairo Security Directorate, Cairo, Jan. 26, 2014. - REUTERS/Amr Abdallah Dalsh

Antiquities thieves have benefitted the most from the waves of riots and lawlessness in Egypt, and they are making fortunes. More treasures are being stolen and sold on the black market with every wave of unrest. Perhaps the most prominent looting incident was that of the Egyptian Museum during the events of Jan. 28, 2011.

That tragedy was repeated with the looting of the Malawi Museum when the Rabia al-Adawiya and Nahda squares sit-ins were broken up on Aug. 14 of last year, and in the looting of the Islamic Museum on Jan. 24. Those incidents have encouraged other thieves to loot antiquities sites by exploiting riots. Targeting museums and archaeological sites has become common during the riots, when security chaos keeps the police busy.

Not a week goes by in Egypt without someone transporting stolen artifacts being arrested or stolen museum pieces being seized.

The crisis has grown from the looting of Egyptian museums with each riot wave to the looting of archaeological excavation sites. The attacks are aggressive, as if some people are taking revenge against the state for their extreme poverty and marginalization by looting ancient monuments. What’s making things worse is that the thieves sometimes destroy the sites themselves, unaware of how valuable the rare artifacts are, according to Hiba Saleh, Egypt's chief inspector of artifacts.

Saleh told Al-Monitor, “The artifacts mafia that used to conduct such operations before 2011 were using tools and specialized techniques that don’t cause damage or destruction, because they know the value of the artifacts in their hands. This is not the case now, and it is a disaster by any measure because they are exploiting the riots to carry out these robberies that destroy our history and civilization. There is a difference between stealing from museums, which contain registered artifacts that can be tracked if taken out of the country illegally and can be recovered by means of the UNESCO law, and looting by means of random mountain excavations in areas with known archaeological value. Looters are using houses adjacent to the Pharaonic tombs to reach artifacts from different periods and remove them from their locations. This destroys their value and the lessons we might have learned had they been left in place, such as identifying the era they belong to. Newfound artifacts with no inscription revealing their era have no value unless we know their original location. The dangerous thing is that for many of the artifacts seized by the police, those who stole them don’t say where they got them.”

Ahmed Sharaf, the director of the Antiquities Ministry’s museums division, told Al-Monitor, “During the previous period, waves of rioting caused a lot of losses, damages and museum thefts. On Jan. 28, 2011, the Egyptian Museum was broken into via the lighting rooms on the upper floor. The thieves then descended to the halls and stole 54 pieces, 28 of which have been recovered. On the day when the Rabia [al-Adawiya] sit-in was broken up, the Malawi Museum was broken into. Of its 1,079 pieces, 1,000 were stolen and 14 were destroyed. The police have recovered 900 pieces so far. And then there’s the latest destruction to the Islamic Museum.”

Sharaf added, “We are currently working to improve the museum's electronic and human security. We have a plan to install bulletproof glass, as in other world museums such as the Louvre. And we have started testing that in the royal rooms in Alexandria and in part of the Tutankhamun gallery in the Egyptian Museum and the mummies hall. We have about 50 museums in Egypt, including those that are under development or construction. Developing all of them according to this [security] system needs at least 400 million euros [$546 million] to resolve the internal security crisis.”

He noted, “UNESCO is currently working to launch the third campaign to save Egypt’s monuments and collect the necessary funds to restore the Islamic Museum. The first campaign was to save the monuments of Nubia. The second was to set up the Museum of Civilization in Fustat. And we call upon international organizations to implement the recommendations of the China Conference about allowing the countries whose heritage was robbed, such as Egypt and Iraq — by using the money from song and music performance rights and intellectual property rights — to enable these countries to implement their plans to renovate and restore their stolen effects.”

For his part, Mustafa Khalid, the director of the Islamic Museum in Cairo, told Al-Monitor, “We need at least 100 million Egyptian pounds [$14.4 million] to restore the museum to what it was. We have received $100,000 from UNESCO so far, along with a donation of 50,000 pounds [$7,200] from the artist Mohamed Sobhi. We call for showing the effects of the terrorist and riot destructions on Egyptian museums and antiquities to the people of the world who sympathize with the groups that support this terrorism in Egypt [so that they can see] that this terrorism has had a devastating impact on Egyptian heritage, not just the waves of riots or thefts. Terrorism doesn’t differentiate between regular, historic or archaeological sites.”

Khalid added, “The Islamic Museum was destroyed and we have lost a large collection of special pieces from the Mamluk era and rare [artifacts] from the Islamic Fatimid, Mamluk and Omayyad eras. The pieces from the Abbasid era were the most affected by the destruction. Also destroyed were rare pieces of gold currency from the year 77 Hijri [696 C.E.]. All those were part of our heritage from our ancestors that we were preserving for our grandchildren, but terrorism caused their destruction."

Khalid noted, “The museum was insured against theft and fire, but no one can prevent terrorist bombings. The details of the terrorist operation were recorded by the museum's outside cameras, which operate 24 hours a day. But everything happened in less than a minute.”