One year on the job, US Secretary of State John Kerry is still seeking ways to change Syrian President Bashar al-Assad’s "calculation." 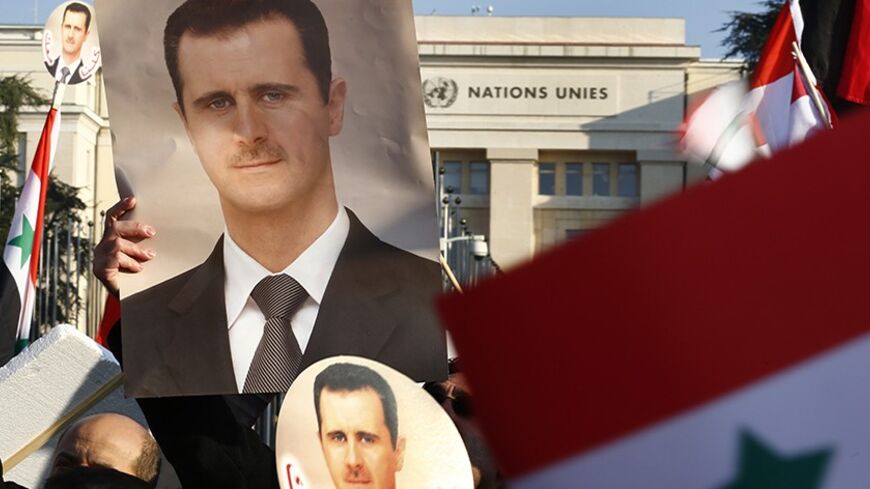 John Kerry has just marked his first year as America’s top diplomat. The 70-year-old secretary of state has brought energy and commitment to what he has said is the last job of his long political career. His ability to deliver on President Barack Obama’s August 2011 outsized demand that Syrian President Bashar al-Assad “step aside” promises to be a key part of his legacy. One year on, how is he doing?

Not so well. Ambassador Robert Ford — the man whose job it was to mobilize successful political opposition to the regime — is out … but Assad remains. Ford’s hopes for a move to the US Embassy in Egypt — the jewel in any Arabist’s crown — fell victim months ago to Cairo’s adamant opposition to host the “Brotherhood’s emissary.” Gen. Abdel Fattah al-Sisi and Co. are of no mind to permit entry to Ford, who in their eyes represents an American effort to undo the work of their fathers, foment domestic rebellion and hand the deep state to the despised Muslim Brotherhood.

Ford’s departure leaves Kerry’s Syria policy without a well-known, expert shepherd. As for Assad, Kerry himself acknowledged in a Feb. 5 CNN interview that “it’s fair to say that Assad has improved his position a little bit, yes. But he’s still not winning. This is a stalemate.”

Not winning, however, is still a long, long road from losing. And that is the goal Kerry set for himself when he declared an intention to force the embattled Syrian president to “change his calculation.”

Realizing this objective has proven far more difficult than declaring it. One year in, Kerry is faced with challenges that, it is safe to say, were not even considered when Obama placed his marker in the sand.

The factors that Kerry initially considered to be decisive in deciding the conflict to Assad’s disadvantage — like the Free Syrian Army — have either not proven themselves or have been displaced by other factors unable to imperil Assad’s staying power. The surrender of Syria’s chemical weapons arsenal is perhaps the most noteworthy of Kerry’s achievements, but even this success has had a far more ambiguous effect on Washington’s demand that Assad must go.

During the past year, Washington has been forced to acknowledge support for maintaining the key anchors of the current regime, i.e., its institutions, including those responsible for security. “Reforming” these no doubt will prove far less satisfying than Washington believes. It is also unclear how changing the faces at the top will change anything but the faces at the top.

Kerry said on Jan. 17 that the United States is "not out of options with respect to what we may be able to do to increase the pressure and further change the calculation. And I think we’ve made that clear to the Russian foreign minister and others, and nor are other players short of an ability to be able to have an impact here."

Here, Kerry is in dangerous territory. There has indeed been a “surge” of rebel fighters, but they have proven more adept at killing each other than regime forces, undermining the key instrument for forcing a change in Assad’s calculation. The takfiris and jihadists owe no allegiance to anyone, not even their Gulf paymasters and certainly not to the promoters of Syrian democracy.

US Sen. Dianne Feinstein, chair of the Senate Intelligence Committee, said at a committee hearing on Jan. 29 that "the most notable development since last year’s hearing is actually in Syria, which has become a magnet for foreign fighters and for terrorist activity. The situation has become so dire that even al-Qaeda’s central leader, Ayman al-Zawahri, has renounced the activities of one group as being too extreme to countenance."

At the same hearing, CIA director James Clapper took note of additional unintended consequences of the Syrian meltdown — the factors that today define the war but were unanticipated by US policymakers. According to Obama’s top intelligence official, these include Syria’s "attraction as a growing center of radical extremism, and the potential threat this poses to the homeland; the spillover of conflict into neighboring Lebanon and Iraq; the destabilizing flood of refugees in Jordan and Turkey and Lebanon."

Clapper reported 26,000 rebel fighters in Syria, including 7,000 foreigners from some 50 countries. US intelligence officials reportedly believe that a handful of American foreign fighters and hundreds of European militants have already returned to their home countries. Those who stayed have all but overwhelmed less resourceful fighters supported by the exiled opposition and Friends of Syria, those who Kerry and others envisioned a year ago as the armed vanguard that would change Assad’s calculation.

Some of these forces are now opting to surrender and rejoin the government. So, for example, 73 rebel gunmen surrendered recently to the army in Beit Sahm south of Damascus. Six gunmen also surrendered to Syrian troops in the Wadi Barada region after being promised safe passage. A source close to the rebel Free Syrian Army in Wadi Barada told an Al-Akhbar correspondent on Feb. 4 that the surrender “was a test for a potentially larger settlement in the area. The six who surrendered will be entrusted with establishing contact between the army and the gunmen in Wadi Barada.”

Along these lines, French sources reported discussions between some elements of the opposition and other dissidents still under the regime’s wing with the aim of discussing the ways to preserve Syrian institutions and avoid the “Iraqi scenario” in Syria.

The increasing role that such made-in-Syria solutions are playing in the day-to-day conflict represent a fragile effort to reassert Syrian ownership of their future, and raise questions about the relevance of the Geneva process. Even the government daily Al-Thawra has voiced support of this effort, calling on Jan. 27 for "a shakeup of the situation that exists between the Syrian parties that carry effective weight on the ground in a manner that allows for the emergence of new understandings that help build mutual confidence. There are already signs of such understandings in the [local] agreements reached in Barza and al-Mu'addamiyya, and in the preparations that the government has announced for Aleppo."

The Obama White House is known for its desire to be on the “right side of history.” But history has a mind all its own. Who would have thought that Hosni Mubarak’s departure in Egypt would result in a reinvigorated military establishment, freed of the dead wood of a calcified regime and riding a wave of popular adulation?

The Egyptian experience alone should offer sufficient warning of the resilience of the postwar regimes in Egypt and Syria, still led by the sons of the Free Officers and Baath respectively — and the parallel weaknesses of their civilian opponents — whether secular or religious. During Kerry’s first year on the seventh floor, the resilience of both has been made distressingly clear.