The Jordan Option and Al-Aqsa Mosque

Jordan is torn between its special role in East Jerusalem and its concerns over the Palestinian impact on Jordanian identity. 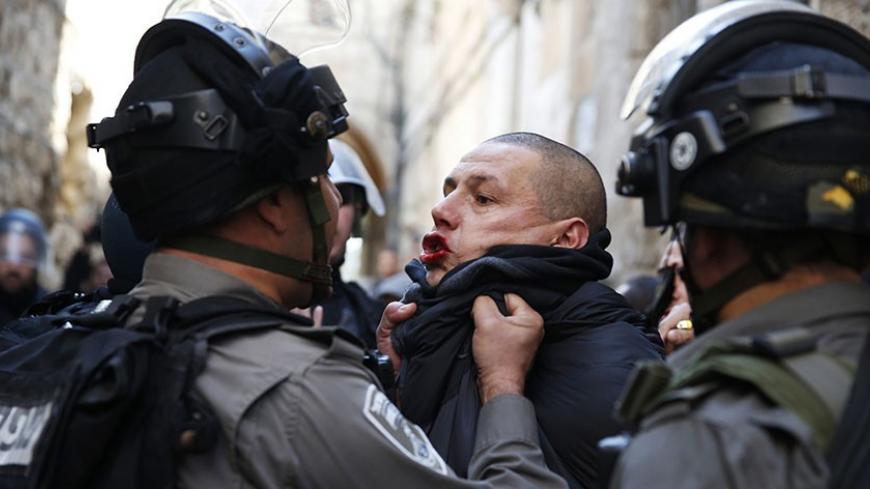 An Israeli policeman scuffles with a Palestinian during clashes near the Lion's Gate in Jerusalem's Old City, Feb. 7, 2014. - REUTERS/Darren Whiteside

Just four days after King Abdullah II issued an ultimatum to a group within Jordanian society that promotes the possibility of Jordan becoming an alternative homeland to the Palestinians, the Lower House of Parliament adopted a unanimous decision to expel the Israeli ambassador in Amman and recall Jordan’s envoy in Tel Aviv. The decision was a response to ongoing deliberations in the Israeli Knesset over ending the Hashemite guardianship over Muslim and Christian shrines in occupied East Jerusalem and replacing it with Israeli custody. Some Israeli lawmakers want to pass a resolution allowing Jews to perform prayers at the Al-Aqsa Mosque compound, while others want unfettered access to the mosque itself.

The government of Israeli Prime Minister Benjamin Netanyahu has said that it does not support moves to end Jordan’s custody of religious sites in East Jerusalem. But various Jewish groups have been allowed to visit Al-Aqsa under police protection, triggering reactions from Palestinians and Jordanians. On Feb. 25, angry Muslim worshipers at Al-Aqsa clashed with Israeli security, raising fears that Israel was about to change the status quo there in anticipation of a US-brokered peace deal.

It was not the first time that Jordan’s parliament has called on the government to expel the Israeli ambassador. It made a similar move last May, but on Feb. 26, the speaker of the Lower House, Atef al-Tarawneh, warned the government not to ignore this latest decision. The question is: How binding is the Lower House’s vote? Government spokesman Mohammad al-Moumani told CNN Arabic that the government respects the decisions of the Lower House and will deal with them from a constitutional standpoint.

Other Jordanian deputies have signed a petition calling for the abrogation of the Jordan-Israel peace treaty if the latter adopts a bill to end Jordan’s guardianship in East Jerusalem. That special role for Jordan is articulated in the 1994 peace treaty, and any unilateral action by Israel to revoke it will be considered a stark violation.

But in spite of the sternness of the Lower House’s decision, few believe the government will act on it. Foreign policy decisions fall under the exclusive authority of the Royal Palace. King Abdullah is not expected to take action now, unless Israel moves to threaten the Hashemite role in East Jerusalem.

The irony in all this is that Jordan finds itself in the forefront of defending its special duties in East Jerusalem, just when the king was reiterating that no peace deal will come at the expense of the kingdom. In his harsh and short speech, the king appeared angry at those among his subjects who continue to assert that “Jordan is Palestine” or promote the so-called “Jordan Option.”

By issuing a royal ultimatum, he was trying to put an end to media, political and popular clamor over contentions that US Secretary of State John Kerry’s peace proposals were meant to "liquidate" the Palestinian cause and pave the way for settling millions of refugees in Jordan. The king condemned those who think that Jordan could sell its national interests for billions of dollars in aid.

Even though he did not name those who promote the notion that Jordan could end up as an alternative homeland for Palestinians, the king said that he has their names and next year, if they persist, he will expose them. Observers believe the king was referring to political salons, former senior officials, old guard and retired generals, who together and for various reasons talk about the existential threat to Jordan every time there is a serious effort to solve the Palestinian issue, or when there are calls to launch drastic political reforms.

An initiative in February by a group of Lower House deputies to force the government to give civil rights to children of Jordanian women married to foreigners was thwarted by conservative lawmakers and politicians who immediately tied it to Kerry’s peace proposals and to a conspiracy to settle Palestinians in Jordan. The initiative, which was believed to have royal support, has been attacked in the media, while the liberal deputy who proposed it, Mustafa Hamarneh, has been described by some as an American agent.

In spite of the king’s firm warning, fear of the Jordan Option, which was first proposed by right-wing Israeli politicians back in the 1980s, remains real. It is unlikely that nationalist East Bank Jordanians will stop talking about it, even though it is rejected by Palestinians as well. One commentator, Hassan Barrari, wrote in the wake of the king’s speech, “Whether we like it or not, the issue of the ‘alternative homeland’ will continue to dominate … until we know the end result of US attempts to resolve the conflict … which drove some analysts to believe that Jordan will have to deal with the repercussions of an unjust solution [in Palestine].”

Another analyst, Fahd Al Khitan, wrote in Al Ghad that the Jordan Option is not an illusion because of the “ambiguous Jordan-Palestine relationship over the past decades.” He said that generations of Jordanians had lived under the illusory concepts of a “United Arab Kingdom” in the early 1970s, followed by suggestions of a federation or a confederation between the West Bank and Jordan. These illusions, he said, should have ended with the disengagement decision by the late King Hussein in 1988, but fears continue to exist.

Upon taking the throne in 1999, King Abdullah soon launched the slogan of “Jordan First,” in effect reversing his father’s regional policies and ambitions in reuniting the two banks of the Jordan River through a political deal. King Abdullah has often repeated that Jordan will never have a function in the West Bank. But the ongoing row with Israel over Jordan’s role in East Jerusalem and the king’s announcement that he will never accept a peace deal that threatens Jordan’s national interests underline the kingdom’s special ties to East Jerusalem and, therefore, the Palestinian issue.

Jordan is host to more than 2 million Palestinian refugees, almost half of them Jordanian citizens. The Jordan Option may be an illusion — Jordan will never become a Palestinian state — but the kingdom’s complex relations with Palestinians, whether citizens or refugees, will feature as an issue in the current peace talks. As for Jordan’s threatened special role in East Jerusalem, it has become both a privilege and a liability.