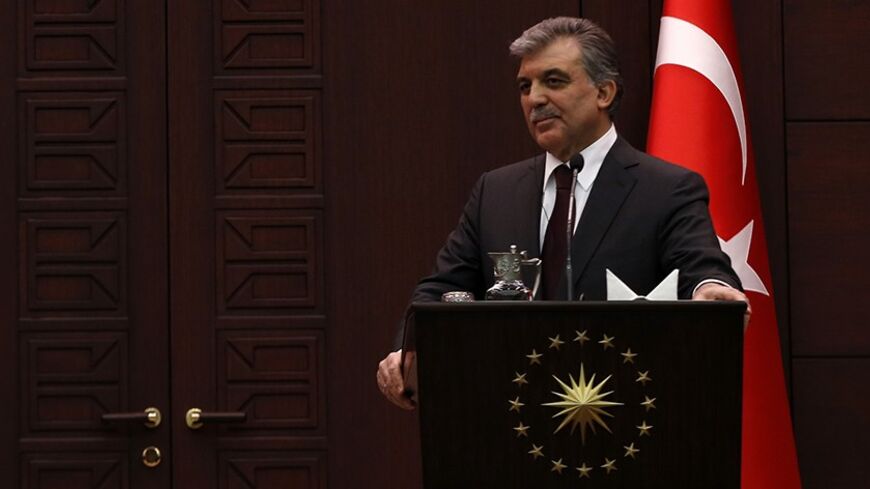 As a columnist who took part in both meetings and asked questions of the president, my observation is this: Gul, who set up the Justice and Development Party (AKP) with Erdogan and who, until he became president, was the party's second in command. He has plainly distanced himself from Erdogan’s wordview. It is not an exaggeration to say that the distance between them is becoming increasingly ideological.

We all know that the president, in contrast with the AKP government, defends Turkey’s EU perspectives, reforms, state of law and freedom of press. In the days following the dramatic intensification of the strife between the AKP and the Fetullah Gulen movement after the corruption investigations that directly targeted Erdogan’s family and close political associates, the divergence between the narratives of Gul and Erdogan was also reflected by their actions.

We have to remember the initiatives of the government to make legislative moves that would totally eliminate the independence of the judiciary were blocked, thanks to the firm stand of Gul, before the European Union stepped in.

As with many of the political developments in Turkey, it is also impossible to predict how the ideological divergence between Gul and Erdogan will affect the AKP. To make a reasonable guess, one has to wait for the outcome of the March 30 local elections. Only then we will be able to say what kind of role Gul is planning to fill in national politics and in the future of the AKP.

For the time being, let’s lay out how Gul has deviated from his old comrade Erdogan, especially in foreign policy.

The first issue is Syria. We can observe that the president of Turkey is more realistic and has a more rational approach as compared to that of Erdogan and Foreign Minister Ahmet Davutoglu, and that he doesn’t ignore politics the way they do.

In his Jan. 30 talk with journalists in Rome, Gul suggested working with Iran on the issue of Syria, saying, “Iran’s launching of a dialogue with the international community and the Western world and better prospects for solving problems through politics will make the world a more comfortable place. The beginning of a new era with Tehran may also enable engaging Iran on the Syrian issue. We spoke with Iranian President [Hassan] Rouhani on how essential it is to work together on the Syrian issue and develop alternatives. We tasked our foreign ministers to work on this. There is another opportunity that could arise from joint efforts. If Turkey can be in close and sincere cooperation with Iran on Syria, we can come up with proposals to the international community, and the Western world can take our proposals seriously.”

The prerequisite for Gul’s proposal is the development of a Syrian policy along rational and secular lines instead of the ideological basis favored by Erdogan and Davutoglu.

Gul’s words were made even more interesting by their timing, coming a day after Erdogan told the journalists in his plane returning from Tehran that “there was no agreement with Iran on Syria.”

For Ankara to work together with Tehran, which today is in the opposite camp over Syria, it first has to take a reality check and accept that the Syrian regime is not going away in the foreseeable future.

Gul has done this reality check and demonstrates that, unlike Erdogan and Davutoglu, he can empathize with the actors in the opposite camp. He said, “In an interview I gave to Foreign Affairs two years ago, I had said that there are no other countries committed to the opposition as much as Iran and Russia are for Syria. I was talking about the West and about Turkey. For Iran, Syria is an existential issue; for us, it is a humanitarian issue. For Russia, it is an issue of warm seas, of having a single base. On the other side, some talk about how [the United States] will be the one to end the war with its known policies. Today, Damascus has the stronger hand. How did they get to Geneva?”

In terms of Turkey's threat analysis, Gul’s opinions are distinctly more realistic and up to date than those of Erdogan and Davutolgu, the architects of Ankara's crumbled Syrian policy. Asked about the Turkish army’s retaliation for a Jan. 30 mortar round fired by the Islamic State of Iraq and al-Sham (ISIS), the president said, "We don’t have any reason to be optimistic about when Syria will achieve salvation. If a strong transition government had emerged from Geneva, we would have had some hope, but it wasn’t to be. The second point is the threats and dangers for Turkey of the existing situation. In that environment of uncertainty, many groups emerged. It is not only a war between the regime and the opposition but also within the opposition. There are no targets. If these [battles] are taking place along our 900-kilometer [559-mile] border, you can’t know where they will spread to. Such situations create and provoke extremism, radicalism. You will not know where they will end.

“This is why there is a big difference between our threat perception of four or five years ago, and our threat perception of today. At that time, the biggest threat for us was the struggle against [Kurdistan Workers Party] terror. Today, we see diverse, numerous groups. We have to be much more careful now. I want to say that our southern border is more difficult. If the Turkish armed forces today refrain from getting involved, who knows, tomorrow you may have to deal with a much more formidable force.”

It is a known fact Erdogan is defining the corruption investigations as an international conspiracy to remove him from power. His government allies and supportive media back this discourse.

On the evening of Jan. 28, Gul was asked a question about the conspiracy theory. A journalist from the pro-government media asked, "Don’t you think that in recent days, the Western media is drawing a portrait of an unstable Turkey?" He gave this interesting reply: “You complain. You gripe and demand that they should treat our affairs positively. Because of its nature, the press is generally expected to be critical. … You have to look at this as an objective media analysis. … There may well be those abroad who intentionally want to paint a negative portrait of Turkey, but it is not correct to group them together with 'They want to show us in negative light; they are campaigning against us.' Let’s not forget that these are newspapers that used to print headlines about the 'reformist government in Turkey.' They used to lavishly praise our successes. That is why we have to be objective. At times, you come across articles that stand out as excessively negative and biased. Some, however, write critically when they observe the debates in Turkey. You should not put them all in same basket as enemies of Turkey. That would be a mistake. We will then see everyone as our enemy, which, of course, is not the case."

There are four main points to Gul’s response:

The president referred to recent unfavorable changes in Turkey when responding to a question about preparations for an international campaign on the centennial of the Armenian genocide. He said, “2014 and 2015 will be crucial years. Turkey will confront many tough questions on international platforms. Three or four years ago, as a shining country with many friends, we were thinking that we could overcome these tough questions. To be honest, with the global situation, our problems that require attention and our domestic issues will make these international questions more difficult to handle. Our government is making some preparations. … We have to find ways to remind others of the importance of being friends with Turkey."

These remarks by Gul contain criticism of how Turkey has become isolated and suffered soft-power losses globally and regionally because of the policies pursued by the Erdogan-Davutoglu team since 2010.

We have to emphasize that Gul’s observations and attitude have strong and favorable reflection in the AKP base and within the party structure, and that he is not alone.