Erdogan takes on the Internet

Turkish Prime Minister Recep Tayyip Erdogan’s attempt to control the media and the Internet could be likened to the battles of Don Quixote. 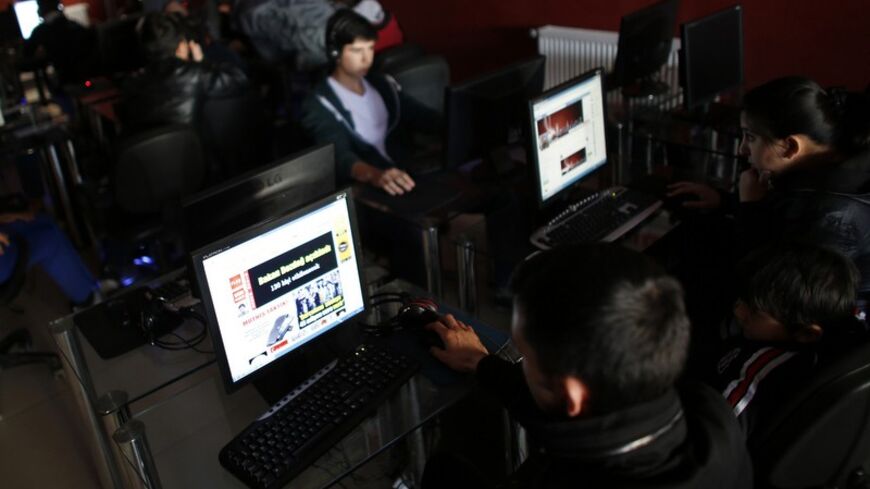 People use computers at an Internet cafe in Ankara, Feb. 6, 2014. - REUTERS/Umit Bektas

If the great Spanish novelist and poet Miguel de Cervantes [1547-1616] had lived 400 years later, his path might have crossed with the Turks again. He would probably have written his monumental work, Don Quixote, not on Spain’s La Mancha plains but in Turkey.

Cervantes first crossed paths with the Turks when he was 24 years old, long before he wrote his novel. Cervantes participated in the fateful Battle of Lepanto in the Gulf of Patras, which saw the defeat of the Ottoman fleet. It is in the annals of history that he fought bravely on board a vessel against the Turks and received three gunshot wounds. One rendered his left arm useless.

We know that when, in Journey to Parnassus, he said that he "had lost the movement of the left hand for the glory of the right," he was thinking of the success of the first part of Don Quixote.

Don Quixote is his magnum opus and is considered to be the first modern European novel — a foundation of Western literature and regarded among the best works of fiction ever written. As fictional characters, Don Quixote and his servant Sancho Panza have found esteemed places in the memories of people in all corners of the world.

Don Quixote has been well-known all around the world since it was written and published in the first decade of the 17th century, mostly because of the virtual war waged by Cervantes’ fictional character against windmills. After almost 500 years, Turkey’s Prime Minister Recep Tayyip Erdogan — sort of a modern incarnation of Don Quixote — has unleashed a relentless war in the virtual world against his own windmills: the social media and all those using it to criticize him. One difference is that, unlike Don Quixote, this modern incarnation does not have only one Sancho Panza. Erdogan is not short of "Sancho Panzas."

Two weeks after his first visit to EU headquarters in Brussels after a five-year lapse — one week after meeting with French President Francois Hollande in Ankara and one day after visiting Angela Merkel in Berlin — Erdogan, with the backing of his “Sancho Panzas," took a step that would have the EU shouting, “Turkey is definitely deviating from democracy.” He went ahead and enacted a new Internet law.

The Internet, which Erdogan has had trouble coping with for some time, has actually become his “public enemy number one.” It was thanks to the Internet, and especially to Twitter, that the bribery and corruption investigation was revealed. This investigation has threatened the government and appears to be the biggest in the republic’s history. It has led to the uprooting of 6,500 police, upending the entire police organization while worrying the Western world, as it has appeared to be a move to eliminate the separation of powers of the judiciary.

Voice recordings of the prime minister and his son talking with some cronies and contractors were also posted on the Internet. These voice recordings clearly revealed the scope of the corruption in Turkey, showing the futility of the counterargument that the corruption investigation was actually a coup attempt against the legitimate government. For example, under the coordination of the minister of communications, $630 million was collected into a “money pool” to buy out one of the biggest media groups, Sabah-ATV. Various contractors threw money into the pool, some up to $100 million, and set up a consortium to buy the Sabah-ATV group. The question is, in return for what?

In return for the promise that they would be rewarded with public tenders.

When the aforementioned voice recording was read out by main opposition leader Kemal Kilicdaroglu in parliament, it was no longer possible to prevent the public from learning about it, exerting pressure on newspapers and TV channels.

In another voice recording circulated via the Internet, recorded during a visit to Morocco on June 4, 2013 — a time when the Gezi protests in Istanbul had reached their zenith — Erdogan got upset when he saw a news scroll reporting that nationalist opposition leader Devlet Bahceli had called on President Abdullah Gul to take action. He called on one of his cronies — a Turkish businessman he had installed as a “political commissar” of sorts at Haberturk TV — to remove the news scroll. This Turkish businessman was a partner of Saudi businessman Yasin al-Qadi, who has been banned from entering the US and many other countries due to his financial links with al-Qaeda. This voice recording was also read aloud in parliament by an opposition Nationalist Action Party (MHP) parliamentarian.

Among the voice recordings making the rounds on the Internet are conversations about lifting the construction ban in an area declared an environmental preserve to enable construction of villas for Erdogan and his family. The governor of Izmir, who resisted against the construction permits, not knowing the prime minister’s involvement, was reassigned from Izmir.

A move even Erdogan's most fervent supporters could not approve of followed: Azerbaijan national Mahir Zeynalov, who is married to a Turk and who was writing for the daily Today’s Zaman, was deported for sending out tweets the prime minister did not like. He left Istanbul and flew to Baku with his wife. He is now tweeting from Baku in stronger language.

Erdogan and his contemporary ''Sancho Panzas'' decided that, to prevent such happenings, the most effective course of action was to enact new Internet legislation. The new Internet bill approved by parliament last week was reported on at length by all the mainstream media organs of the Western world.

“Lawmakers led by the premier’s Justice and Development Party approved the measure late Wednesday despite repeated warnings that it would significantly curtail free speech and intrude on personal freedoms” read a report in the Wall Street Journal.

The law, which must be approved by Gul to take effect, would allow the agency charged with monitoring telecommunications (whose newly appointed director, handpicked by Erdogan, has a background with the National Intelligence Organization) to block access to Internet sites within four hours of receiving complaints about privacy violations. Turkey’s web hosts would also have to store all traffic information for up to two years, according to the measure.

This latter point is reminiscent of George Orwell’s novel, 1984, in which “Big Brother is watching you.” As for the former clause, as long as “privacy violation” is not elucidated, anything Erdogan may see as a “privacy violation” can be banned for all Internet users in Turkey.

When you have a prime minister who can call from thousands of miles away to remove a TV news scroll that he did not appreciate, you can easily guess how the new Internet law will be used and to what ends.

Meanwhile, there are 40 million Internet users in Turkey.

EU reaction was not late in coming. The first declaration was from Peter Stano, spokesman for the European Commissioner for Enlargement and European Neighborhood Policy, Stefan Fule. Stano said, “The Turkish public deserves more information and more transparency, not more restrictions.” Then Fule personally sent out two tweets, one in Turkish, the other in English: "Internet law 2Badopted raises serious concerns.Public needs more transparency&information,not restrictions."

Next, European Parliament President Martin Schulz entered the fray. Schulz, who had met Erdogan two weeks ago in Brussels, tweeted: "Turkish parl approval of bill tightening gov control over Internet - step back in an already suffocating environment for media freedom."

The point reached now is probably the toughest test of Gul’s entire career. Gul, who prefers a political approach that does not put himself at the forefront, now faces a test: Does he have the prowess to oppose Erdogan?

Will Erdogan, who can’t bear to be a loser, overrule Gul? This is the question being asked, although not in so many words.

Can Erdogan also defeat the Internet?

For the answer to that question, you would have to reread Cervantes’ Don Quixote.