The US Deputy Secretary of State says that “the quality of the agreement” on Iran’s nuclear program will ultimately determine if Saudi Arabia’s concerns are addressed. 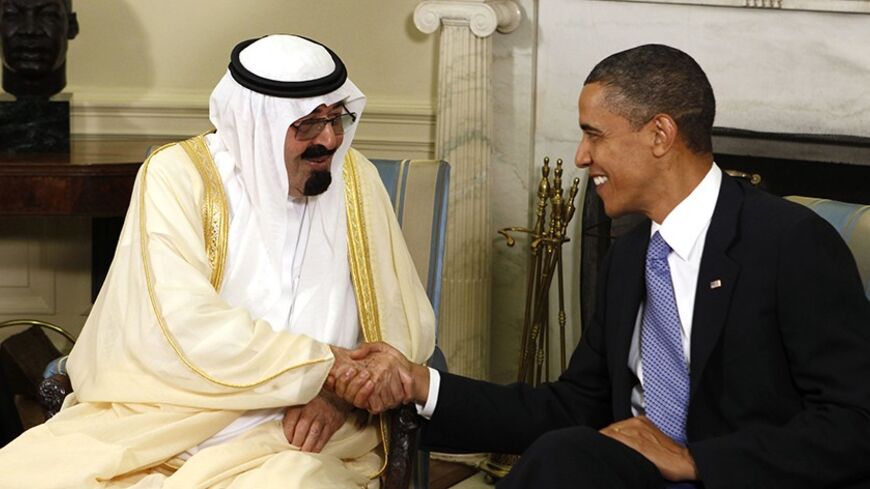 US President Barack Obama meets with King Abdullah of Saudi Arabia in the Oval Office in Washington, June 29, 2010. - REUTERS/Larry Downing

WASHINGTON — For those eager to know what President Barack Obama will be telling King Abdullah in Saudi Arabia next month, comments Wednesday [Feb. 19] by Deputy Secretary of State Bill Burns provided a likely preview.

Speaking at the Center for Strategic and International Studies, Burns put forward a case for reducing US friction with the Saudis and other Sunni Arab powers, arguing that the US takes their concerns about Iran and Syria seriously and that “our Gulf partners know that no country or collection of countries can do for the Gulf states what the United States has done and continues to do.”

Since August, when the Obama administration threatened but ultimately chose not to use force against Syria for its apparent use of chemical weapons, Saudi officials have been outspoken in criticizing the US for what they perceive as a lack of leadership. Recent progress in nuclear talks with Iran appears to have poured salt on Saudi wounds as concerns rise that an improvement in US relations with Iran will come at the expense of long-time Arab allies across the Persian Gulf.

Asked by Al-Monitor how Obama could calm Saudi fears, Burns said, “part of the answer lies in the quality of the agreement” being negotiated by the US, the other five permanent members of the UN Security Council plus Germany and Iran. If a comprehensive agreement can “demonstrate the peaceful nature of the Iranian nuclear program,” Burns said, that “will go a long way” toward convincing US Gulf allies that a nuclear deal is in their interests, too.

Burns also suggested that Obama would stress to the Saudis on his second visit to the kingdom as president — and the first in five years — that the United States understands their concerns about a “range of dangerous Iranian behavior that threatens our interests and those of our friends in the region” beyond the nuclear issue.

Burns acknowledged that Syria is at the heart of those concerns and hinted, without being specific, that the Obama administration is looking for new ways to end the stalemate between the opposition and Bashar al-Assad's regime. Two rounds of talks in Geneva have not been successful, Burns said, and there is “zero evidence of seriousness” on the part of Syrian government representatives in negotiating a political transition that results in Assad’s removal.

The veteran US diplomat, who served as ambassador to Russia from 2005-2008 and is scheduled to represent the US at the closing ceremonies of the Sochi Olympics later this week, urged Russia to “use all the influence it can bring” on the Syrian government to agree to a political transition. Otherwise, Burns warned, Sunni Muslim extremism will grow throughout the region and menace Russia, which is not far away from the Middle East and faces terrorism threats from Sunni militants in the Caucasus.

Washington is also providing advanced weaponry to council members, including 72 F-15s to Saudi Arabia, 30 F-16 fighters to the United Arab Emirates and a variety of advanced missile systems to these and other GCC states. The White House in December designated the GCC as an international entity eligible to buy US weapons and defense services — the same designation NATO possesses — and has been urging Gulf countries to cooperate more on defense and increase the interoperability of their weapons systems. However, GCC members differ in their threat perceptions of Iran and willingness to follow the Saudi lead.

The US also faces tensions with Saudi Arabia, Bahrain and other Gulf states over the slow pace of their internal reforms and attitudes toward rocky political transitions in Egypt and other Arab countries that have undergone upheaval since late 2010. Burns suggested gently that countries that fail to “ease the sense of popular grievance on which extremists feed” would face continuing threats to their stability. He also warned that the billions of dollars Gulf countries have given to Egypt to defeat the Muslim Brotherhood and prop up the military-run government there “will produce little sustainable effect without a more comprehensive and carefully conceived strategy” that includes meaningful reforms and acceptance of political pluralism.

Burns acknowledged that the United States and the Gulf countries are bound to have “tactical differences” over these issues given their divergent histories, but asserted that the “US-Saudi partnership is as important today as it ever was” in resolving regional crises.