The suffering of Palestinian refugees in the besieged Yarmouk camp in Syria has united Palestinians in outrage. 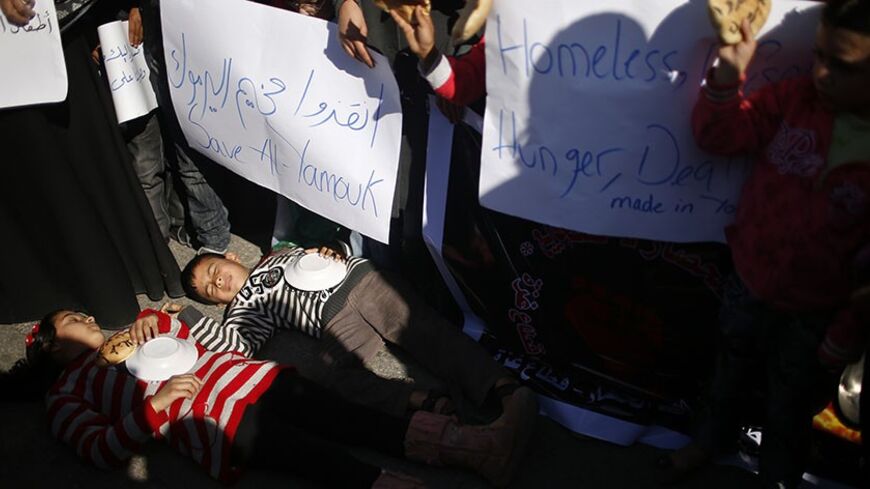 Palestinian children lie on the ground in Gaza City as they take part in a Jan. 16, 2014, rally to show solidarity with Palestinian refugees in Syria's main refugee camp, Yarmouk. - REUTERS/Mohammed Salem

Never in recent memory has any single issue or location unified Palestinians as much as the starvation of the besieged Yarmouk refugee camp just outside Damascus.

The camp, one of the biggest in Syria, has been a target of the internal Syrian conflict, with some opposition forces holed up inside and government forces keeping a tight siege on the camp.

For weeks, Palestine TV has been covering nonstop the siege of Yarmouk. Political leaders are paraded, news of the status of the food shipment updated every hour and a fund-raising campaign has also been initiated. The save Yarmouk drive was not confined to official Palestinian TV. Social media, local groups, demonstrators and communities inside Palestine and out and on both sides of the Syrian crisis have all been recruited to give attention to the besieged camp. The name Yarmouk was even publicly stated during the opening sessions of the Geneva II conference in Switzerland.

What is remarkable is that the save Yarmouk initiative has infiltrated all fields and has been adopted and picked up by political groups that have not seen eye to eye. While Fatah seems to be the lead faction paying attention to Yarmouk and its destiny, supporters of other Palestinian groups, including Hamas, have also joined the bandwagon, collecting donations and making public declarations. Palestinians and their supporters in Jordan, the Gulf and other diaspora locations have also experienced public rallies and fund-raising campaigns.

UNRWA, the international organization responsible for Palestinian refugees, also initiated its own campaign to help Yarmouk. The UN agency carried out a successful three-day social media campaign; according to an UNRWA news release, it has generated “more than 31.6 million 'impressions' and reached tens of millions of people around the world.”

It is not clear what has made the save Yarmouk story so unifying. The image of a Palestinian child in Yarmouk holding a loaf of bread with the words Yarmouk has gone viral. In addition, the fact that Palestinian refugees are forced to search again for shelter after years of living in refugee camps has broken even the toughest of hearts.

Politically, the timing of the campaign is convenient for various groups. Fatah feels that leading the campaign shows that it is still the leading Palestinian national movement and that despite rumors about selling out the refugees in current talks with the Israelis, it hasn’t given up on the rights of refugees, including those in Syria, to return.

The Islamist movement Hamas called on all militias to leave the besieged camp. Hamas, which lost its footing in Syria after it became clear that the movement could no longer stay neutral, has jumped on the bandwagon to show that it still cares about fellow refugees in Syria.

Ironically, while Hamas was once a close ally of the Syrian regime before reversing its position, the PLO and its affiliates have remained more neutral in the Syrian conflict and thus have had better success at getting food into the camp, which had once numbered as many as 150,000 inhabitants, but currently has less than 50,000.

Palestinian anger and frustration has produced some relief for the besieged Palestinian camp, but that relief was short-lived. According to the Associated Press, after a number of convoys succeeded in entering, shots targeted the aid trucks, making it clear that this is all that will be allowed in for the time being. This sudden slowdown of humanitarian aid has not stopped the popular campaign to save Yarmouk. While the campaign has produced food and funds for the camp, its biggest success has been that it has refocused for many the Palestinian tragedy, which is personified by Palestinian refugees still living outside their homes and without the shelter, protection and support of their own state.