A US official says Washington is pressing the Iraqi government to broker a long-stalled oil law and end a controversial de-Baathification law to help defuse the crisis in the Anbar region. 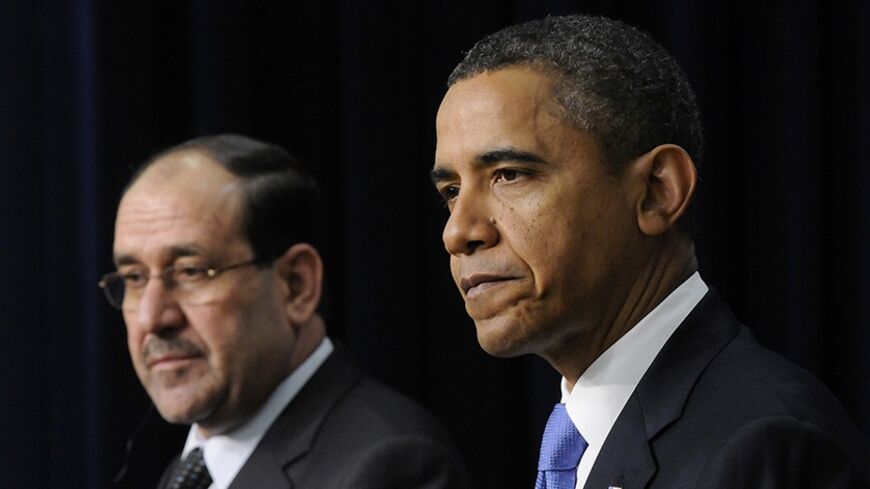 The Barack Obama administration is using the current crisis in Iraq’s Anbar province to try to push Prime Minister Nouri al-Maliki’s government to take steps to shore up the country’s tattered unity, including reaching a new oil agreement with the Kurds.

Comments made in recent days by Vice President Joe Biden and by a senior US official in a conference call with a handful of journalists on Jan. 9 suggest that the Obama administration — accused by critics of being hands-off since US forces left Iraq three years ago — is trying to shape Baghdad’s response to extremist Sunni forces in Anbar in proactive ways. How successful the United States will be in the current polarized environment in Iraq and throughout the region remains to be seen, however.

“There’s a real sense [in Iraq] that this is a critical moment in the country,” the US official, speaking on condition of anonymity, said. Iraqis want to deal with the crisis in Anbar on their own but are accepting US “help and advice” based on “hard lessons learned” during the US battles with al-Qaeda elements in Anbar in 2004 and during the surge of 2007-08, the official said.

Members of what is known as the Islamic State of Iraq and al-Sham (ISIS) — many of them foreign jihadists — have been flowing into Anbar from Syria for more than six months, initially setting up camps in remote desert regions. On New Year’s Day, they took over two key cities in Anbar — Ramadi and Fallujah — in a massive armored assault. The group’s declared aim is to link territory in Syria and Iraq into a new Islamic state.

According to the US official, Sunni tribes in Ramadi, assisted by targeted strikes from Iraqi armed forces remaining outside the city, have wrested back control so that militants are left only in isolated pockets. Fallujah remains in ISIS’ hands but “some initiatives are in place that seem to be having some traction,” the official said.

The Obama administration has urged Maliki to keep the Iraq army outside Fallujah to avoid a bloodbath with sectarian overtones. “We are confident we have an agreement that the approach taken in Fallujah will be similar to that in Ramadi,” the official said.

“We are advocating a … patient, deliberate and restrained approach. A wrong move could play right into their [the militants’] hands.”

The United States is also urging Maliki to take broader steps toward reconciliation with Sunnis and Kurds to decrease animosity toward the Shiite-led government. One element would be a new oil agreement allowing Kurds to export their oil production of about 300,000 barrels a day through existing Iraqi pipelines.

The US official said that Iraqi Kurdistan Prime Minister Nechirvan Barzani had a successful visit to Baghdad at Christmas and made “a tremendous amount of progress” on resolving stalled negotiations over an oil agreement. Biden, who has been talking every day this week with Iraqi officials, is also focusing on this issue, the official said.

Denise Natali, a columnist for Al-Monitor and an expert on oil and the Kurdistan Regional Government (KRG) at the National Defense University in Washington, told Al-Monitor that there is likely to be “a compromise and payment of some sort to the KRG” that will allow its oil to flow out to Turkey. She doubted, however, that agreement would be reached on a long-sought national hydrocarbon law this year and attributed whatever progress is achieved less to the crisis in Anbar than to upcoming parliamentary elections in April that could topple the Maliki government and hurt Kurdish parties as well.

“This is all revolving around election politics,” she said.

The latest developments in Iraq are taking place against a backdrop of new criticism of the Obama administration by its former defense secretary, Robert Gates. In a new memoir, Gates suggests that Obama didn’t believe in his own strategy toward Afghanistan and allowed top officials to engage in “aggressive, suspicious and sometimes condescending and insulting questioning of our military leaders.” Gates also excoriated Biden, who opposed surges in both Iraq and Afghanistan, as “wrong on nearly every major foreign policy and national security issue over the past four decades.”

Beyond Biden’s interventions, Brett McGurk, deputy assistant secretary of state for Iraq and Iran, is devoting considerable time to the Iraq crisis. McGurk, who served in Iraq while the United States still had thousands of troops there, arrived in Baghdad on Wednesday and is expected to stay for several days.

In addition to lobbying over Kurdish oil, the Obama administration has been urging the Iraqi government to finally scrap a decade-old de-Baathification program that long ago purged the last real Baathists from the Iraqi body politic. The US official acknowledged, however, that an amnesty would be “extremely difficult to get through the political process” while suicide and car bombings occur with deadly regularity against government and Shiite civilian targets. Such bombings killed about 8,000 civilians last year.

The official also said the United States would try to accelerate delivery of new weapons systems to the Maliki government, including Apache attack helicopters that have been held up by US Congress. Such systems create training and resupply relationships that sustain long-term relationships, he said. US failure to provide them is  encouraging Iraq to purchase Russian equipment, he added.

While Iraqis and Syrians may be turning against al-Qaeda elements in their midst, their success also depends on the willingness of outside powers — in particular Iran and Saudi Arabia — not to fuel opposite sides in a regional proxy war.