In Egypt, watch the Nour Party

The Salafist party has been underestimated since 2011. 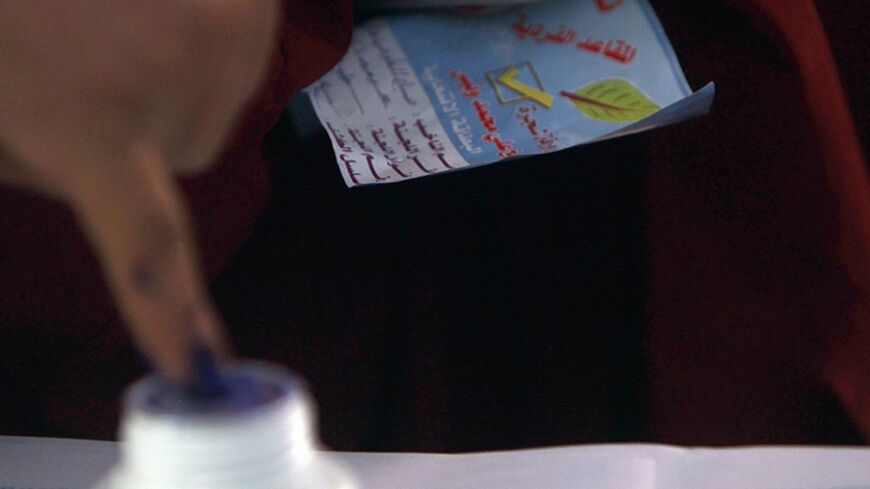 A man dips his finger in ink as he holds a flyer from the Nour Party in Toukh, near Cairo, Jan. 3, 2012. - REUTERS/Amr Abdallah Dalsh

It's hard to see any winner in Egypt’s messy political arena — one that is dominated by near-daily deadly confrontations between the Muslim Brotherhood and the military-backed interim leadership. However, there's one political party steadily reinforcing its place in Egypt’s political scene: the Salafist Nour.

Since its establishment in 2011, the Nour Party has raised many eyebrows among pundits and observers. Many did not take the ultra-conservative party seriously, despite its substantive gains in the first post-revolution parliament (111 out of 498 seats). The Salafist party is considered an indirect beneficiary of the rising fortune of Islamism in post-Arab Spring Egypt.

Two years later, the underestimation of Nour has continued. Analysts have considered the party window dressing used by the army to legitimize the coup. Some went further and predicted that Nour’s support of the military-backed government following the ousting of former President Mohammed Morsi would finish its political career. But the political dynamics in Egypt refute this assessment. Backing June 30 did not damage the Nour Party; rather, it has enforced its stance as a player that should not be underestimated.

Nour is indeed puzzling. It has a strict, dogmatic interpretation of Islam; nonetheless, it plays politics in a shrewd, pragmatic way that took many by surprise. Thus far, Nour is the only Islamist political party in Egypt that has succeeded in surviving the upheaval of the last few years, despite the defection of some of its members to form the Watan Party. This defection was not over Nour supporting the army’s chief, Abdel Fattah al-Sisi, and his ousting of Morsi, as many like to believe; but for deeper reasons that ought to be carefully studied.

Dogma does not mean dumb

Both Salafists and Brotherhood cadres were ill-equipped to handle the transition from underground life under former President Hosni Mubarak to the overt public scrutiny following the January 2011 revolution. Nour, however, decided to take a safe approach to politics by channeling its dogmatic beliefs into shaping Egypt’s constitution and legislation while acknowledging its own limitations and inexperience in Egypt’s bewildering political arena. Such an approach has led it to ally with the Brotherhood following Morsi's election and later distance itself from the Brotherhood after Morsi’s ill-advised constitutional edict in 2012. Unlike many Islamists who saw the Brotherhood as a sort of benevolent “Big Brother,” Nour instinctively understood that living in the shadow of the Brothers, while safe and comforting, would never yield concrete political gains, as failures will negatively affect the whole alliance and not just the Muslim Brotherhood.

Unlike the Muslim Brotherhood, which has always considered the Egyptian state, with its various institutions, an enemy that must be subdued, Nour has acknowledged that it is unrealistic to refashion what was left of the Egyptian state after Mubarak's fall. Instead, Nour opted to accept the state’s imperfections and work to infuse its Islamic views into the pillars of the state via the constitution and possible future legislation.

Following the June 30 uprising against Morsi, Nour has projected the image that Egyptians have rejected the cultish politicization of Islam rather than political Islam as an ideology, an assessment that it seems to successfully propagate among many of its followers. Despite some of Nour’s cadres joining the Brotherhood’s sit-ins, they refrained from openly defecting.

On the other hand, Nour’s views have suited the military-backed leadership, as it has reinforced the impression that Morsi's ouster was not a move against Islam. Also, of course, it painted Nour as not just the guardian of the Sunni doctrine, but also as a patriotic group that put Egypt first.

The constitutional referendum is not a test for Nour

Many rightly consider the constitutional referendum a test of legitimacy for all players that backed the military coup. But again, Nour is an exception, simply because it is the only political party that approved both Morsi’s 2012 constitution and the post-Morsi 2013 draft. Nour has emphatically refuted all the claims that the 2013 draft is less Islamic that the 2012 one. In fact, Nour leaders claim that the new draft preserves the Arab and Islamic identity of Egypt. In many interviews in local media, senior Nour leaders have painted the image that the 2013 draft enshrines Islam in clearer terms inside the constitution, and will prevent any future parliament from issuing legislation that contradicts Sharia. That may or may not be true. However, it is a perception that even Egypt’s non-Islamist politicians are not willing to dispute for the sake of silencing the anti-coup movement.

For Nour, the referendum is a win-win event; if violence prevents its conduction, Nour will blame the Brotherhood as spoilers. Already, Nour cadres are accusing the Brotherhood of being immature, embarking on political suicide. On the other hand, if the voting begins, a yes vote will legitimize an “Islamic” constitution, and a no vote, though unlikely, will vindicate an equally Islamic 2012 constitution that was approved by Nour before.

Nour has managed to project itself as the good Islamists with an authentic national project. Its symbiotic relationship with the military-backed leadership will help it to build bridges with many conservative, apolitical, ordinary Egyptians. It will remain safe within its new comfort zone as long as the Brotherhood continues to play the anarchist bad guys. Only a complete submission or even hibernation of the Muslim Brotherhood will finally allow society to question the wide social and religious gap between Nour and non-Islamist parties.

In short, the Islamic literalist Nour did not find any Quranic verse that bans coups, so it decided to back the Egyptian military, which it considers "the only functioning army in the region." It has played its cards very well to survive in post-June 30 era. However, there are some questions that remain: Will the “halal” coup allow Nour to impose its full version of Sharia at a later stage? Or will Nour continue its pragmatism and accept “imperfect” Egypt as it is? In the new year, Nour’s Nader Bakkar broke the party rule not to offer season's greetings, but it's still unclear how many rules Nour leaders are willing to break. For now, Nour has not bothered to find answers to many difficult questions; it focuses, instead, on the countdown to the referendum and on sheltering its cadres from the venomous anger of the defeated Brotherhood.