Letters released by an activist, a journalist from prison and an Islamic scholar reveal the depth of the polarization in Egyptian society. 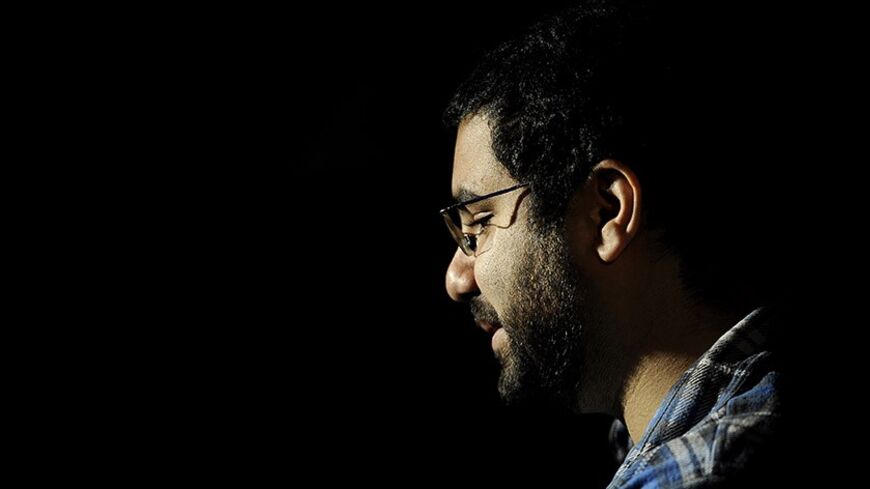 CAIRO — Three letters written by prominent Egyptians — two from inside jail — are making the rounds on social media, punctuating the fallout of government crackdowns in a politically charged climate that appears far from reconciliation, despite calls to end polarization on the third anniversary of the revolution.

One of two letters released from jail was written by activist Alaa Abdel Fattah in late December inside Tora prison. It reappeared this week after being translated into English and shared on social media. The second was written by Al Jazeera journalist Abdullah Elshamy, jailed for five months without charges.

The third letter was written by Emad Shahin, a scholar of political Islam, who is now being charged along with ousted President Mohammed Morsi and Muslim Brotherhood leaders with conspiring to undermine national security.

Fattah and Shahin have both been critical of the military leaders who ousted Morsi in July and of Morsi and the Brotherhood while they were in power. Elshamy was one of hundreds rounded up Aug. 14 in a bloody crackdown on sit-ins protesting Morsi’s ouster that left up to 1,000 dead. He is one of several Al Jazeera journalists behind bars in Egypt.

Shahin’s letter is a strongly worded defense, calling claims against him “baseless and politically motivated.” His seven charges include espionage, leading an illegal organization, preventing state institutions and authorities from performing their functions and attempting to change the government by force.

“I categorically and emphatically deny all the charges,” Shahin wrote, challenging the state security prosecutor to present evidence substantiating the charges.

He has never been a member of the Brotherhood, Shahin continued, but he has been a fervent critic of authoritarian rule in Egypt and has expressed strong support for peaceful protests and the main objectives of the January 25 Revolution, “namely freedom, dignity and social justice,” he wrote.

It appears his critique of events since Morsi’s ouster, including the violent storming of sit-ins in August, “is my true offense,” Shahin wrote, vowing to continue advocating for the right to protest “that is enshrined in Egyptian law.”

Elshamy’s letter was shared from the Facebook accounts of his wife and brother Jan. 23. The Al Jazeera reporter wrote of laying in a 12-meter space with 16 other prisoners, and spending 160 days in jail without being charged.

The Al Jazeera network and its journalists have come under attack since Morsi’s ouster, accused of siding with the Brotherhood and the ousted president.

Elshamy’s letter highlighted a polarized climate in Egypt that has led to the quashing of press freedom. He criticized journalist colleagues who “consent to be mouthpieces and witnesses to the violation of the freedom of media,” and spoke of a lack of regret for his jailing, defending with pride his work with Al Jazeera.

“I do not belong to any faction or ideology. I belong to my conscience and my humanity, and I do not take interest in what has been said in the local media about me or my colleagues. History doesn't forget; we are going strong,” Elshamy wrote.

He mentioned his jailed Al Jazeera colleagues Mohamed Badr (also held for five months without charge), Mohammad Fahmy, Baher Mohamed and Peter Greste, who have been in custody since Dec. 29, accused of spreading lies harmful to state security and joining a terrorist organization.

Elshamy wrote that he has chosen a hunger strike to send two messages: “One to journalists who choose to falsify the facts and cover up the violations of freedoms and media, the other to the Egyptian junta that I do not mind to die for my freedom. Nothing will restrict my freedom or break my will and dignity.”

While Shahin and Elshamy’s letters struck defiant tones, Fattah’s month-old letter was shared with sadness by supporters, also on Jan. 23. An English translation is available in a Google document.

Fattah was arrested at his home last November after prosecutors accused him of breaking a new law banning spontaneous protest. He has been in detention since, awaiting a trial. In his letter, he wrote of the physical discomforts of prison in a measured tone, drawing parallels to the plight of the homeless, and focused his reflections mostly on sadness over the loss of time with family.

Life in prison is a series of negotiations, he wrote, and conditions are improving. At the same time, his improving access to newspapers has meant reading biased editorials about how the three-year sentence for activists Ahmed Maher, Ahmed Douma and Mohamed Adel are due to hostility toward their April 6 youth movement, “as if the man arrested is just a theoretical notion named April 6 and not a human being who has a 5-year-old daughter,” Fattah wrote.

Maher, Douma and Adel were convicted of calling for a demonstration without a permit and assaulting security forces. They are appealing from Tora prison.

Fattah, who has a young son, said that this time — after being imprisoned under the regime of former President Hosni Mubarak and again by the military rulers who replaced him — he finds his imprisonment “is serving no purpose.”

“It is not resistance, and there is no revolution,” Fattah wrote. “The previous imprisonments had meaning because I felt that I was in jail by choice and it was for a positive gain. Right now, I feel that I can’t bear people or this country, and there is no meaning for my imprisonment other than freeing me from the guilt I would feel being unable to combat the immense oppression and injustice that is ongoing.”

In sharing his letter two days before the anniversary of the revolution, prominent blogger and reporter Sarah Carr wrote, “It really is game over.”

The April 6 Youth Movement continues to demand the release of the jailed activists, and this week published a reconciliatory initiative on its Facebook page, asking Egyptians to refrain from polarization and acts of violence during the anniversary. The group was among the organizers of the protests culminating in Mubarak’s toppling in 2011.

Supporters of Morsi and Minister of Defense Abdel Fattah al-Sisi have both called for demonstrations on Jan. 25, leading to concerns over violence. During commemorations of Egypt’s 1973 war with Israel on Oct. 6, more than 50 were killed when Brotherhood and army supporters took to the streets.

"The revolution has been reduced to narrow struggles over power," the April 6 Youth Movement said in a statement.