Nelson Mandela has a special place among Palestinians. 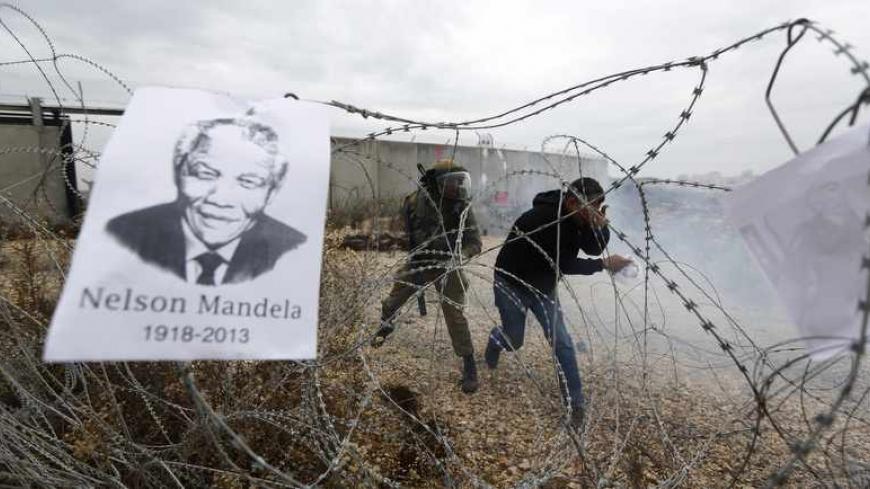 A placard depicting former South African President Nelson Mandela hangs on a barbed wire as a Palestinian protester reacts to tear gas fired by Israeli soldiers during clashes at a weekly demonstration against Jewish settlements in the West Bank village of Bilin, near Ramallah, Dec. 6, 2013. - REUTERS/Mohamad Torokman

The passing away of the leader of the South African liberation movement, Nelson Mandela, at the age of 95 brings to the forefront historic and parallel comparisons between the African national movement led by the African National Congress (ANC) and that of Palestinians led by the Palestine Liberation Organization. For years, the two movements were entwined and mutually supportive. But whereas the ANC under Mandela succeeded in liberating its people, the Palestinians have not fared as well.

The Palestinian and African cases are similar and different. The two causes reflect historical injustice and Western support of the domineering regimes. The collusion of so many countries, especially in the Western hemisphere, that profess support for self-determination and human rights with oppressive regimes is well-documented. In both Palestine and South Africa, the refusal to grant freedoms and inalienable rights was excused by a well-structured and powerful international dehumanization campaign that branded resistance against discrimination and occupation with derogatory terms such as terrorism.

Both Palestinians and South Africans adopted various forms of resistance including violent and nonviolent means, and both were met with brutal and exaggerated force with the aim of putting down any type of resistance. Military and political opponents of the ruling powers who survived physical assault were put in jail simply for their thoughts and public political support to their own liberation movements that were declared “terrorist.”

Not only were the liberation struggles given such negative labels, but the people they were fighting for were treated discriminatorily by people they did not elect and by laws and courts over which they had no control or say.

The struggle for freedom was rejected and the people’s national desires were treated as the social unrest of rowdy and ungrateful people who didn’t appreciate the benevolence and the privilege that the "white man," or in Palestine’s case "the European Zionist," was bestowing upon them.

These differences were known by the people fighting for freedom, but were totally ignored by those whose own thinking should have led them to the same conclusions. Mandela was not silent on such Western hypocrisy. In a powerful letter to America’s darling New York Times columnist Thomas Friedman in 2010, the former South African president wrote, “The Palestinian-Israeli conflict is not just an issue of military occupation and Israel is not a country that was established ‘normally’ and happened to occupy another country in 1967. Palestinians are not struggling for a ‘state’ but for freedom, liberation and equality, just like we were struggling for freedom in South Africa.”

The apartheid analogy was the focus of another former president. US President Jimmy Carter wrote an entire book — Palestine: Peace Not Apartheid — on how Israel has turned the occupied territories of the West Bank and Gaza Strip into what South Africa was like before liberation.

When the Palestinian and South African movements began, they were similar in scope and goal. Both wished for and fought for democratic regimes in which all citizens have equal civil and political rights. Africans continued with this goal while the Palestinians, after failing to convince Israeli Jews to accept the concept of a binational state for all the people of historic Palestine, changed course and opted for a goal of two states for two peoples.

The story of Mandela is not only a story of national liberation, but also a personal one that many in the world revere. Palestinians unhappy with their current leaders are looking for their own Mandela. Many are seeing in imprisoned Marwan Barghouti, whose political and resistance history is not too dissimilar from the African leader, a possible Palestinian Mandela. Barghouti’s wife was in South Africa with former comrades of Mandela to launch a campaign calling for the release of Barghouti and all Palestinian prisoners.

Mandela is a towering figure who has dominated liberation literature for the latter half of the 20th century. His role in supporting the Palestinian movement will always be remembered and revered. Palestinian thoughts were captured in a short tweet by a Palestinian journalist from Ramallah, Nour Odeh: “Tonight Palestinians are South Africans, mourning #Mandela. His legacy will shine our path as we continue marching to our #freedom RIP.”