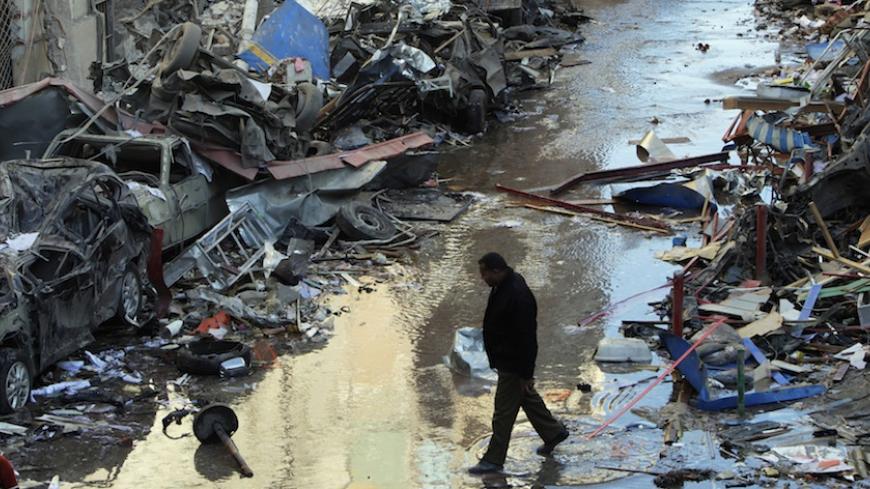 A man walks near debris after an explosion near a security building in Egypt's Nile Delta city of Mansoura in Dakahlia province, about 120 kilometers (75 miles) northeast of Cairo, Dec. 24, 2013. -

CAIRO — Immediately after Egypt's decision to brand the Muslim Brotherhood a terrorist organization, the Ministry of Interior announced a hotline for citizens to report suspected members of the outlawed organization. The act was reminiscent of a budget Malta hostel I lived at in 1998. Back then and there, illegal immigrants reported each other to the authorities when disputes broke out among them.

But in that Malta hostel, only the state authorities dealt with the offenders, raiding the hostel to arrest everyone except the Maltese owners and whoever carried a passport emblazoned with a valid visa. This wasn’t the case in Egypt's Dakahlia province in the aftermath of a bombing that targeted the security department late at night on Dec. 23.

For more than 12 hours after the bombing, dozens of anti-Brotherhood civilians, enraged by the bloody scene, torched a few homes of prominent Muslim Brotherhood officers and destroyed some 20 businesses allegedly owned by members or affiliates of the former-ruling, now-terrorist organization.

As the volatile situation continued around the city of Mansoura — where the security department building stood charred as a massive funeral procession carried the corpses of 17 police officers and civilians — Egypt's popular TV show host and owner of al-Faraeen channel, Tawfik Okasha, applauded the vigilantes and called for more attacks on Brotherhood members across the province.

Other media personalities and politicians expressed deep concern over the increasing acts of violence led by civilians and the uncontrolled incitement through media outlets, a situation they feared could possibly evolve into nationwide civil strife.

"I don't want to exaggerate and say it will lead the country to a civil war, but such acts of vandalism and violence should be severely punished before evolving into wider popular clashes in different parts of the country," Hassan Nafaa, a Cairo University political science professor and prominent opposition figure, told Al-Monitor.

Nafaa believes that such attacks were fueled by people's views of the Muslim Brotherhood as an organization deeply tied to militant groups. "This is a very dangerous escalation that should be immediately contained by the state," said Nafaa.

"As for some media outlets, they are unprofessional, irresponsible and are definitely inciting violence," Nafaa added. "Okasha and whoever is provoking civilians should be prosecuted immediately. They are another version of the morality groups formed by militant Islamists who operated freely during Mohammed Morsi's one year in power."

"We understand the popular reaction in Mansoura. It was sparked by the size and bloodiness of the attack, and we don’t believe that this will turn into any form of societal violence across the country," Abd el-Bary said, representing the ministry established after Morsi's July 3 ouster.

"People should report crimes and criminals to the government without being involved or trespassing on the duties of state authorities. Incitement is a punishable crime, and violence should never be met by violence," Abd el-Bary said, warning that state authorities would not stand by as violence spreads.

"Violators will be punished regardless of their motives or political allegiances," he said.

He stressed that any action taken against the Muslim Brotherhood should be "through the judicial system, which is not politicized and is currently establishing emergency judicial panels to look into urgent terrorism-related cases."

However, Abd el-Bary's statements to Al-Monitor were not as widespread in the local media as were confirmations by official spokesmen of the Ministry of Interior that "whoever participates in Muslim Brotherhood protests will be sentenced to five years in prison, while leaders of such activities would be sentenced to harsher penalties including death sentences."

On Dec. 27, less than one day after Bary's assurance that violence would not spread, clashes erupted between Muslim Brotherhood protesters and police forces backed by civilians in several districts of Cairo and other cities across the country.

Official government reports stated that as of Friday evening, three people were killed, dozens injured and more than 250 detained, in addition to 15 security personnel who sustained injuries while dispersing different Muslim Brotherhood gatherings and protests.

Along with the violent confrontations between security forces and protesters, which became an almost daily occurrence in Egypt since Morsi's ouster, ordinary citizens in the Nile Delta's Sharqiyya province led several raids on homes of alleged Muslim Brotherhood officers.

A brief report published by the Egyptian daily Al-Dostor on Dec. 27 stated, "Dozens of citizens in the villages of Talga and Hawamda, Sharqiyya province, besieged the homes of members and leaders of the terrorist Muslim Brotherhood organization, raided the houses and detained a number of the leaders."

The article, titled "Sharqiyya Citizens Declare War on Leaders of the Terrorist Brotherhood," described the incident as "a scene of people's anger toward the bombing operations waged by the terrorist brotherhood organization and its takfiri and terrorist partner groups since the downfall of the ousted president [Morsi]."

According to the newspaper, demonstrations at Hawamda, the home village of a soldier killed in the Dec. 23 Dakahlia bombing, "called on Defense Minister Abdel Fattah al-Sisi to confront terrorism," before devolving into raids on members of Muslim Brotherhood members.

Nafaa, the political science professor, had anticipated the spread of violence days earlier: "Ordinary people's involvement in violence only serves the plans of those who attempt to destabilize the country and hinder the state's efforts to hold the national referendum in mid-January. Such tactics are fully applied by the Muslim Brotherhood through protests and providing legitimacy for militant attacks."

"The state will triumph eventually, but the Muslim Brotherhood, along with militant groups, could lead the country into a prolonged phase of civil strife," added Nafaa.