The "first step agreement" with Iran is a giant step toward recasting the strategic landscape in the Middle East for the better, including for US allies Israel and Saudi Arabia. 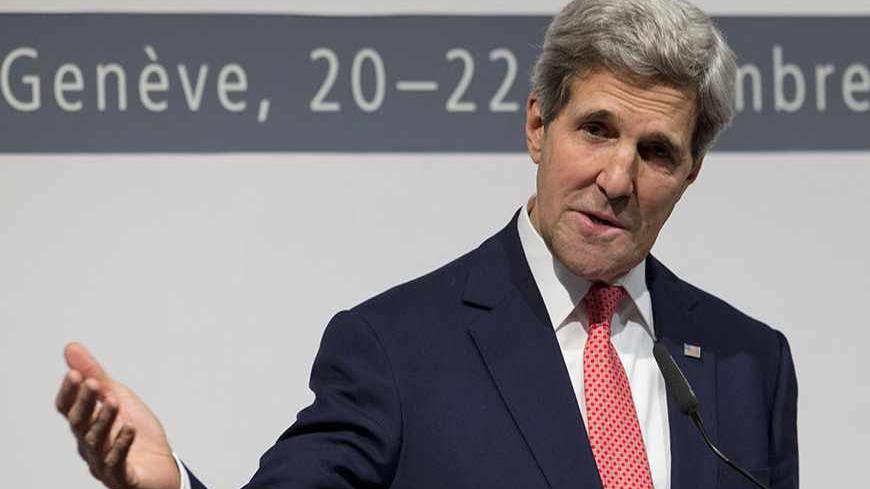 US Secretary of State John Kerry speaks to the media about the deal that has been reached between six world powers and Iran in Geneva, Nov. 24, 2013. - REUTERS/Carolyn Kaster

The “first step agreement” between Iran and the P5+1 is the most dramatic evidence of the Barack Obama administration’s newfound commitment to recasting alliances and security structures throughout the Middle East. For the first time in a generation, US policy in the broader Middle East has begun to build diplomatic, consensual frameworks for the future that are aimed at reducing, rather than promoting, regional instability and undermining states and their institutions.

Iran is currently front and center in this regard, but the surprisingly efficient destruction of Syria’s chemical weapons arsenal should also be counted among the policy's first notable achievements. As Obama himself said on Nov. 23, after the Iranian agreement was reached, “Diplomacy [has] opened up a new path toward a world that is more secure — a future in which we can verify that Iran’s nuclear program is peaceful and that it cannot build a nuclear weapon.” This development is a welcome, if much-belated, turnabout and counts as the best news in many years.

The potential for a far broader regional detente, built upon closing the nuclear file, offers opportunities to reshape relationships throughout the region and beyond. For more than a generation, Iran has been ground zero of the demonized “axis of evil.” As such, it was impossible for Washington and its allies to consider it a legitimate partner for productive diplomacy, let alone regional cooperation. That stalemate, so destructive for peoples throughout the region, is now thawing.

Iran’s power throughout the region as the political and ideological lodestar of the “axis of resistance” continues to obstruct the regional policies of the United States and its allies in Syria, the Gulf and elsewhere. But the changes now under way will establish a new and challenging context for old relationships involving not only those alliances associated with Tehran but also those associated with Washington.

Dead enders and those who look forward by looking backward take note. The ripples of detente between Tehran and Washington may well reverberate in places long considered immune to effective diplomacy and cooperation — for example, the role of Hezbollah in Lebanon and even its blood-soaked relationship with Israel. The message of condolence sent by US Secretary of State John Kerry in the wake of the Nov. 19 bombing of the Iranian Embassy in Dahiyeh may be off-putting to many of those steeped in the decadeslong confrontation between Washington and Tehran, but Kerry’s response is indicative of an improvement in US-Iranian relations that will necessarily draw in Hezbollah as well.

Most of the noise, however, has been coming from Washington’s camp, notably from Israel but also Saudi Arabia, both of which see no reason to tamper with the existing regional rules of the game. It is of more than passing interest that Obama has few champions from within the region for his effort. Indeed, his most vehement opponents are his closest historical allies, who are suspicious of the changes Washington and Tehran are cooking up through secret diplomacy.

It is far more comfortable for Israel and Saudi Arabia to fight to protect the status quo — for Israel, Iran’s isolation, for Saudi Arabia, its desire to roll back Iranian influence in Baghdad and Damascus — than to be the object of decisions made in secrecy by powers greater than themselves. Yet, this is the situation unfolding today with Washington’s efforts to establish detente with Iran. There are options available to these new rejectionists, but they are limited and on the whole counterproductive.

Saudi Arabia in particular has been in this uncomfortable position before, when it unsuccessfully lobbied President George W. Bush not to topple Iraqi leader Saddam Hussein. The remedy Obama is offering them today — a recasting of the axis of evil — is no less unwelcome. The ability, however, to torpedo a diplomatic initiative that enjoys unprecedented international and domestic US support is slim, and the price of “success” — undermining the power of the president to define and secure US national interests — is not worth paying.

It is almost certainly the case that the architects of this detente, focused as they must be on making certain but incremental progress on technically challenging negotiations, have themselves yet to fathom its broader implications. Changing the nuclear equation with Iran will prompt other changes, necessarily affecting friends as well as traditional foes. To borrow an analogy, Obama promises that if US allies like their current relations with Washington, they will not be forced to change anything if a deal with Iran is adopted. A basic change in the plan will, however, affect everything, including Washington's relations with allies in Israel, the Gulf and elsewhere. Obama, no less than others, must begin to think about how the region should look after the nuclear file with Iran is sorted, rather than reflexively making promises that he cannot, and will not want to, keep.

After missteps on Syria that still threaten a future similar to Iraq's, Obama is establishing another policy trajectory. He aspires to build, not to destroy, in the best case restoring the idea of Syria, making a deal with Iran that leaves the region more — rather than less — secure and establishing a foundation for mutual security and a reduction in regional tensions.