Amid the devastating violence that has plagued Iraq for the past 10 years, Iraqi youths are increasingly carrying knives and other light weapons. 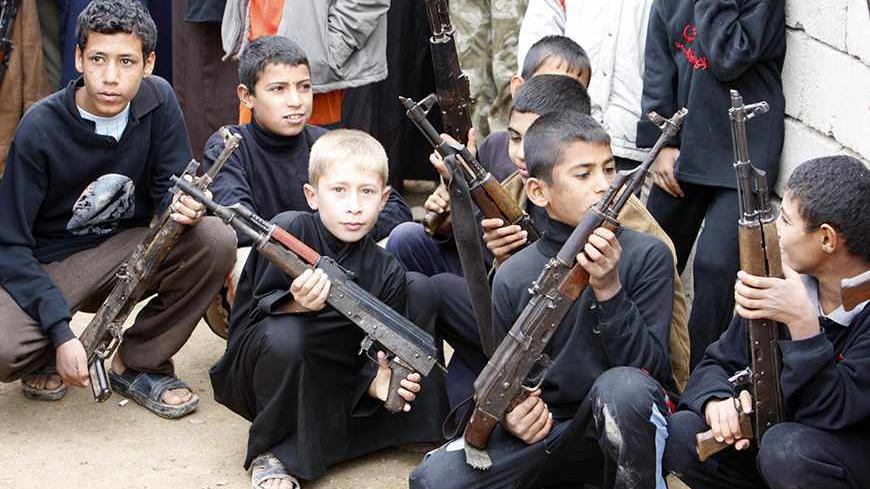 Many young Iraqis have started carrying knives and other bladed weapons whenever they leave their homes, to the extent that it has become an almost indispensable part of their personalities and sense of self. That is how Barea Saeed, 18, from Baghdad described it to Al-Monitor. He claims to feel weak and threatened whenever he finds himself without a knife in hand.

At a time when trade in all kinds of weapons has proven to be a profitable endeavor in Iraq, many people have become frustrated with the phenomenon of young men acquiring knives, according to Babel police officer Ahmad Fadel. Speaking to Al-Monitor, Fadel noted, “There are more [violent] instances now involving bladed weapons than firearms. They account for nearly 70% of all [violent] incidents.”

In commercial areas near Al-Shorjah and Bab al-Sharqi in Baghdad, Muhammad Karim sells long, sharp knives and brass knuckles, alongside screwdrivers, razors, and even electric batons.

While most young Iraqis claim that they have no intention of using the weapons in their possession except as a matter of last resort, the day-to-day reality of street stabbings and proliferating knife wounds tells a different story.

In most Iraqi cities, a similar list of dangerous merchandise is being sold in the markets, with young men comprising the majority of customers.

On a street corner close to the secondhand market in the city of Babel, south of Baghdad, Abu-Mahdi lays out his wares that consist of a variety of lethal weapons. Speaking to Al-Monitor, he noted, “My customers are overwhelmingly young men.” He admitted, “Criminals and those with criminal records could possibly benefit from this merchandise.”

Sociological researcher Usama Muhammad emphasized the importance of this reality in an interview with Al-Monitor. According to him, “Many young men either carry lethal weapons between the folds of their clothing or symbolic testaments of [their capacity for] violence and cruelty such as medals glorifying war, images indicating brutality and so on. All this indicates how widespread violent behavior has become.”

Muhammad added, “Arms manufacturers and vendors encourage this by manufacturing fine and visually attractive types [of weapons], using the latest techniques. This often entices young men to buy them.”

Muhammad did not dismiss the possibility that “there is a relationship between drug use and carrying lethal weapons.”

If most lethal weapons are of inexpensive Chinese manufacture, the markets also carry more “original” merchandise. That is what Marwan, who has been selling such weapons for nearly four years, told Al-Monitor. The price of brass knuckles, a German-manufactured weapon, is about $30. A similar Chinese knockoff, by contrast, sells for about $10.

Layth al-Jabouri, 16, is proud of his purchase of an elegantly designed weapon popularly referred to as Um al-Yay. In an interview with Al-Monitor he described his feelings, “I feel powerful when I’m carrying it, but I won’t use it unless I’m forced to do so — in a situation of self-defense.”

While waving his silver-plated steel, Jabouri said, “It doesn’t kill. It wounds. It’s a reliable means to keep [oneself] safe, without killing anyone.”

Despite Jabouri’s remarks, a number of knives contain millimeter-sized cavities that insert air pockets into the victim’s bloodstream at the moment of a stabbing, leading to the victim’s immediate death.

One year ago, Najm found himself in a quarrel with someone and was forced to strike him with brass knuckles. According to Najm, it was the first time he had used a sharp object in this manner. The incident left severe wounds on the victim’s face, and Najm spent several weeks in prison as a consequence.

In less reputable areas, where drug addicts and ex-convicts are prevalent, adolescents have developed innovative methods of attack and defense. Among these are placing shaving razors in one’s mouth, and use their tongues and jaws to slash the opponent’s face, inflicting deep wounds.

In Babel, Al-Monitor witnessed a young man in a cafe taking a small knife known as an “axe” from his pocket. At the push of a button, an iron razor smoothly appeared from its wooden container in a sleek manner.

There are differing perspectives surrounding the phenomenon — some view it as a healthy expression of courage and masculinity, while others blame adolescent, irresponsible behavior. Sociological researcher and lawyer Ibtisam Farhan from Babel told Al-Monitor, “It is one of the manifestations of violence that has caused anguish to Iraq and the Arab region as a whole in recent years.”

“One can clearly note that common means for expressing oneself in terms of political positions — or even in sports — often default to violent behavior among many,” she added.

According to Farhan, “What’s on the news — wars, charred corpses, body parts strewn about — in addition to videos of beheadings and slaughter widely circulated on YouTube and other social networking sites, is hastening the formation of a culture of violence, especially among the youths.”