In the aftermath of Iran's nuclear accord, Turkey can only play an effective regional role if it adopts a secular foreign policy. 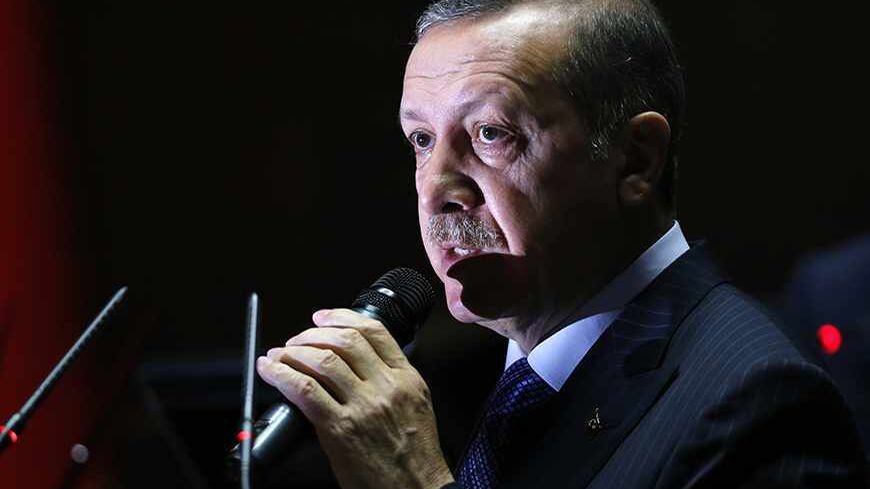 Turkey's Prime Minister Recep Tayyip Erdogan addresses members of parliament from his ruling Justice and Development Party (AKP) during a meeting at the Turkish parliament in Ankara, Nov. 26, 2013. - REUTERS/Umit Bektas

The nuclear accord reached between the P5+1 states and Iran in Geneva during the early hours of Nov. 24 was a heartwarming sign that the international system can still produce diplomatic solutions. It is a success story for Iranian President Rouhani as much it is for the Barack Obama administration. If former Iranian president Mahmoud Ahmedinajad’s extremism and irrationalism had not been replaced by Rouhani’s realism and rationalism — in other words, if Iran’s foreign policy had not truly been "reset" — the world would not feel as at ease as it does right now.

The Iranian example highlights the prerequisite that countries unclog blockages in their foreign policies caused by extremist and fantasizing leaders by changing the actors who cause such obstacles. It is hoped that the fears of some journalists closely following the Geneva process will not come true, and the planned final negotiations will avoid becoming a hostage of the Syrian crisis.

The hope is also that the six-month accord just reached will not be undermined by questions that might arise and disagreements that could erupt. Furthermore, it is desired that radical power centers in Iran refrain from shooting down the process and that a "happy ending" is possible for all. Only then can Iran, as an unshackled actor free from isolation, containment and embargo, take its deserved place in the arena and receive what is due to it. Only then can one speak of a new "Eurasian balance."

If this positive scenario materializes, Turkey will of course be among the countries to accrue significant benefits to its security and economy. That said, Turkey will also have to confront new challenges.

First, how might this scenario reinforce Turkey’s security? Until the end of the Cold War, the geopolitical balance between Turkey and Iran was a small-scale continuation of the relationship between the Sunni Ottoman Empire and Shiite Safavid Iran.

Following the first Persian Gulf War and the process of isolating Saddam Hussein's Iraq in the 1990s, and the US-led occupation of that country in 2003, Shiite Iran’s influence returned to its traditional geographical turf in Iraq, from which it had been expelled by the Ottomans in the 16th and 17th centuries. The geopolitical balance began to tip against Turkey with US intervention.

If Iran had not pushed toward becoming a nuclear-armed power but had instead chosen to remain a nuclear-threshold country, even that would have seriously shifted the geopolitical balance against Turkey, creating an asymmetry between two countries that would have been tremendously costly for Ankara to try to overcome.

Turkey would have had only two options against a nuclear or nuclear-threshold power. The first and most likely option would have been for Turkey to stay securely under NATO’s nuclear umbrella, leaving it subject to the rules and whims of others. The second option would have been for Turkey to develop its own nuclear capability. If Ankara had opted for this course, it would have destroyed its relations with the West and the Western alliance and in addition made itself a threat to key regional actors, leading eventually to it being marginalized through countermeasures and sanctions.

A happy ending to the nuclear accord with Iran and assurances of a long-term non-nuclear Iran will protect Turkey from both negative consequences as well as enhance bilateral relations with Tehran. An Iran free from embargoes, sanctions and isolation will open the way for trade and economic relations with Turkey. Both countries stand to benefit considerably.

On the other hand, it is clear that Israel and Saudi Arabia are not happy with the accord reached in Geneva. No matter how robust the conditions of the six-month agreement appear on paper, the deep distrust these two countries harbor toward Iran prevents them from feeling assured. The implementation of the accord without interruptions is definitely needed to create an environment conducive of confidence in Tehran to assuage these two countries.

If a positive scenario is realized, most of Iran’s problems with the international community will be resolved. But one should not expect the current tensions along the Shiite-Sunni fault line, running from the Gulf to the eastern Mediterranean, to be overcome by the accord. To the contrary, one can expect that a Shiite Iran free from sanctions and isolation will implement its regional policies with increased self-confidence.  This in turn will amplify the uneasiness of Saudi Arabia and other Gulf states. No one should be surprised if, as an indirect outcome, the nuclear accord contributes to increased tensions between Sunni Saudi Arabia and Shiite Iran.

In light of these predictions, one must ask what position Turkey should take. The role a Turkey led by the Justice and Development Party (AKP) could play in the Middle East has been dramatically curtailed by placing itself on the Sunni side of the sectarian fault line in the region, including its policies pursued in Syria. One must assume, however, that the Sunni, Islamist AKP will remain in power for the foreseeable future. The pressure on Ankara to drastically alter its stymied foreign policy will grow with Iran’s normalization of its international relations. Will Turkey, with its Sunni actor identity, become party to Saudi-Iranian tensions, or will it play a role in cooling such tensions?

In Syria, Turkey cannot play a crisis-solving role because of its Sunni identity, as well as it being a fomenter and party to the current conflict and impasse. There also will not be a positive role for Sunni Turkey in future regional conflicts. It is thus high time that Ankara undertake a real and substantive reset in its foreign policy, instead of pretending to do so for the sake of appearances.