Contrary to the alarmist stance of Prime Minister Benjamin Netanyahu, past and present chiefs of Israel's Defense Establishment do not reject the agreement signed with Iran. 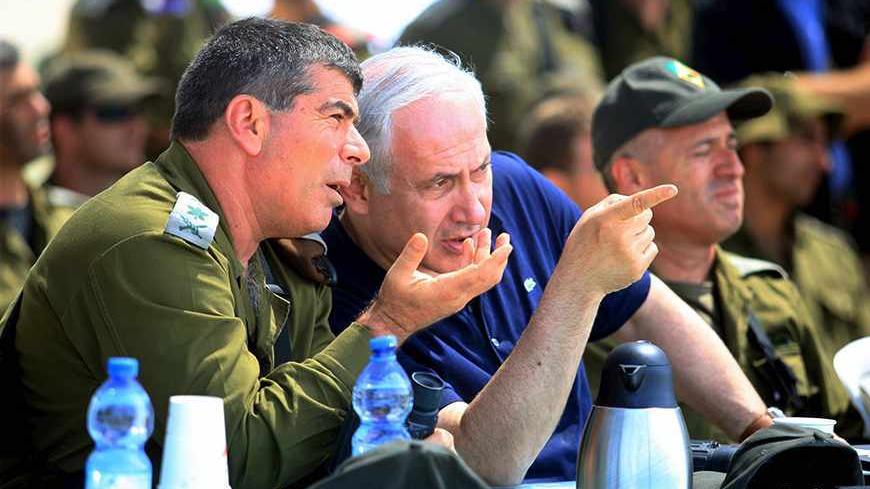 On Nov. 25, barely a day after the signing of the historic agreement between Iran and the world powers, a large air-combat exercise took place in Israel. It saw the participation of several foreign air forces from Israel, the United States, Greece and Italy.

The Israeli air force assigned seven squadrons to this exercise, a huge number of planes considering its overall size. The [Blue Flag] exercise was said to simulate a war with a country that has a large army and a modern air force. It seems to me that Iran, in the setting of this exercise, would suit well the definition of “enemy.” On the other hand, this exercise, the kind of which cannot be mounted overnight, had been scheduled long before. Thus, its proximity to the signing of the Geneva agreement could easily fall under the category of “coincidence.” While that may very well be the case, the Middle East is a region where bizarre coincidences could quickly spiral into a bloody reality.

In recent days, a debate has been taking place in Israel out of sight. On one side of the barricade are those supporting the policy of Israel’s Prime Minister Benjamin Netanyahu. Voicing scathing public criticism, this policy collides head-on with the agreement and those who signed it while declaring that “Israel is not bound by it” and that “Israel will prevent Iran from obtaining nuclear weapons, even if it has to do it on its own.” Pitted against them are those who believe that the agreement is a done deal and that Israel would be well-advised to quickly toe the line with reality and use diplomacy in a bid to influence the final agreement, which should be achieved within six months.

A delegation from Israel’s National Security Council headed by the newly appointed Director and former Mossad official Yossi Cohen is leaving for the United States to meet with its US counterpart to “start consultations,” as US President Barack Obama put it, ahead of the resumption of the talks with Iran.

It is against the backdrop of this debate that some interesting questions are being asked in Israel. The first one is what would have happened if Israel had attacked Iran on its own in September 2009 or September 2010. These are two dates for which the Israel Defense Forces (IDF) prepared to mount a large-scale military operation in Iran. Back then, the political echelon —to wit, Netanyahu and then-Defense Minister Ehud Barak — instructed Israel’s defense establishment to “cock its gun” and be ready for action. Tension peaked, yet defense establishment chiefs refused to “cock” the establishment without an explicit order from the cabinet, as required by Israeli law. Details from the tumultuous backrooms leaked to the media, suggesting a veritable historic drama.

The bottom line is that Israel did not strike. Netanyahu can accuse defense chiefs of defeatism, but history will credit him for Israel’s inaction. An Israeli prime minister can and is able to secure approval for any strike if he really wants to see it carried out and if he is determined and believes in the move. Considering that courage cannot be counted among his most prominent traits, Netanyahu is a prime minister who has never launched a serious strike anywhere. He has always skirted large-scale confrontations.

These days, he is tormenting himself for having missed out on a historic opportunity. (Back then Iran had not yet entered its “immunity zone,” since most of its important installations were not buried underground.) He is now drafting the indictment sheet that he might one day submit, or not, to his predecessors and generals.

The idea of an Israeli strike was predicated on the assumption that such an operation would prod the United States into finishing the job. Israel knows that such a job cannot be completed without a real, heavy-weight power (that also has aircraft carriers) — one which would be able to continue the momentum and the airstrikes against the nuclear sites until the ayatollahs accept that their dream has gone up in smoke. At the same time, there was a need to rally the international community to impose a genuine naval blockade on Iran the day after, in a way that would hamper the Iranians' efforts to rebuild whatever can be rehabilitated.

Many question marks came up in connection with these two premises, eliciting doubt among Israel’s generals. In the end, this is what tilted the scale against a strike. Notwithstanding, there is no shortage of people in Israel’s political and defense establishments who believe that a massive, focused and successful Israeli strike against Iran’s nuclear sites two or three years ago could have delivered the goods, prompting an international move that would have brought the hoped-for results. However, those espousing this notion still remain a small minority in Israel.

Another question is whether Israel’s military option remains in effect. The answer to this is also complex. Technically speaking, it does. Israel invested a staggering 12 billion shekels (approximately $3.5 billion) in this option. It is able to dispatch a large number of — manned and unmanned — aircraft to Iran. It is able to fire surprisingly highly effective and penetrative munitions against the nuclear sites. It is able to do it more than once. It is also able to surprise the enemy with various devices and special ploys that can inflict real damage to the Iranian program.

Replacing Iran, Israel has stepped into the shoes of the pariah state, the one that nobody really takes into account and that goes unheeded. This happened, people in Israel are saying, because of Netanyahu’s “gevald” (alarmist) policy. He is the last doomsday prophet who threatens to bring down the house, knock the table over and be a party pooper. This policy has its price, which came in the form of a British statement two days ago [Nov. 24], warning Israel not ''to undermine'' the agreement with Iran.

At this point in time, an independent and defiant Israeli military action against Iran would be tantamount to committing suicide, hastening Iran’s nuclearization. Tehran will not feel bound by any constraints and able to break out toward a bomb uninterruptedly.

The third question pertains to the opinion of Israel’s past and present defense professionals about the agreement.

As for the first group, the answer is clear. Former Mossad Director Meir Dagan and former Shin Bet Director Yuval Diskin believe that the agreement with Iran — while not perfect and with a few holes — has benefits that outweigh the damage. Stopping Iran’s stampede, it sparks hope for a positive final agreement. These two are fully at peace with their historic stance that blocked an Israeli offensive. This position is also shared by the IDF’s former chief of staff Gabi Ashkenazi and former Military Intelligence Director Amos Yadlin, who hinted at his position on several public occasions. Yadlin’s predecessor, Maj. Gen. Aharon Ze’evi-Farkash, is also of the same opinion.

And where do the incumbent officials stand — namely chief of staff Lt. Gen. Benny Gantz, Military Intelligence Director Maj. Gen. Aviv Kochavi, Mossad Director Tamir Pardo and Shin Bet Director Yoram Cohen? They cannot speak up and express their feelings, yet in internal forums they continued all along to oppose an independent Israeli military move. As for the agreement, the voices that come out of the IDF’s Military Intelligence Directorate are slightly different from what Netanyahu and his senior ministers are saying. An analysis of the Geneva agreement by military intelligence points to its pros and cons. The agreement has advantages and achievements but also drawbacks, mistakes and problems. The main thing that Israel’s military intelligence does not demonstrate — in contrast to the government’s position — is panic.

There’s no panic at all among Israel’s professional military echelons. Nobody talks about a catastrophe or an imminent second holocaust. People discuss the merits of the agreement with levelheadedness and discretion. After all, doomsday prophecies are not their thing. For this we have Netanyahu.