Yemeni farmers preserve a coffee industry that dates back to ancient times to transform beans from the mountains of Haraaz into coffee sold in trendy coffee shops in North America. 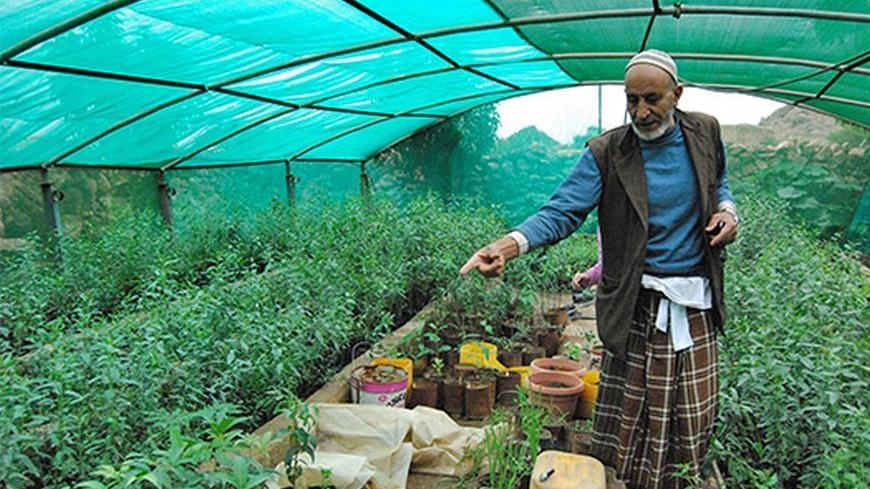 SANAA, Yemen — Moving from tree to tree, an old man shows off his treasure. He is so engrossed in his task that, at times, he forgets who is around. His hand, tanned and wrinkled by years of working under the sun, cautiously extends toward a stem and carefully handpicks coffee cherries, while explaining the delicate and intricate process.

Mohammed al-Maisi’s coffee nursery is hidden behind a red mosque in the mountains of Al-Ahjar, one hour away from the capital, Sanaa.

The 60-year-old father of four and grandfather of six has been farming his entire life. “I used to go to school, and when I returned I would help my father plant coffee,” he said. A general and a coffee cultivator, his father passed his love for farming on to his son.

Maisi proudly points to the different coffee varieties he cultivates, which are safely covered by a green plastic tunnel: “aldawairi, tufahi, shibrigi, alahjuri.”

Yemen is credited with being the first place where coffee was consumed as a beverage and cultivated as a commercial crop. Coffee drinking appeared in the middle of the 15th century, in the Sufi monasteries of Yemen.

“Coffee was everything for Yemen,” said Sheikh Shabbir Ezzi, a businessman at Al Ezzi Industries. “It’s a gift from our ancestors. You can see how important coffee was for Yemen from the emblem of the country. Inside the bird’s heart is a coffee plant.”

While coffee has proved lucrative for some business ventures, many farmers have not been able to live on coffee alone.

Since the 1950s, Yemeni coffee has been facing great challenges. In 2011, coffee export was 20 times less than 150 years ago. Once a world-renowned port, Al-Makha — from which the English adaptation of the word “mocha” comes — is now almost out of business. In fact, according to Peet’s Coffee & Tea, the word mocha “became associated with chocolate because Europeans' first experiences with cocoa, in the 17th century, reminded them of the bittersweet coffee they imported from Yemen.”

Today, farmers often do not get remuneration comparable to the quality of their coffee for a variety of reasons, including the disconnect between the farmers and the market abroad.

Maisi grew coffee all his life, and is nostalgic about the good old days, when coffee was a “golden commodity.” He is forced to diversify his crops with qat — a mild narcotic commonly chewed by a significant majority of the country — to survive. “Financially, I’m doing very well. Yet, I cannot attribute it to coffee alone,” he said.

“The government should help me remove the qat plants and support me to plant more coffee instead, as a pilot project,” he added. “We receive nothing from the government. They do not care about our resources.”

He was surprised to hear that this idea is in fact being implemented in the beautiful mountains of Haraaz by the local community and Al Ezzi Industries.

The enterprise is currently working with 3,500 coffee farmers — including 1,000 from Haraaz — providing them with incentives to produce better quality coffee and paying their farming cooperatives directly to achieve long-term sustainability.

Their sophisticated post-harvesting techniques of fusing tradition and modernity, and their knowledge of marketing abroad using Yemeni coffee’s uniqueness and reputation, has enabled their success. According to their website, Al Ezzi Industries implements “globally accepted standards of grading and classifications, fair trade systems and traceability by utilizing the very latest technology.”

Their knowledge of this niche market enables them to connect to various markets in the West. Maisi, on the other hand, was unaware that hipsters in New York City’s Williamsburg neighborhood sip a cup of Arabica coffee after paying about a quarter of his daily salary. “Maybe we should move to America,” he jokingly said, after being told the cost of a cup of Arabica at one of the many coffee shops in North America.

As they sip their delicious Arabica coffee, many customers are unaware of the long process it takes to make a cup. The beans used to make their coffee can only begin to be harvested five years after being planted at 2,500 meters (8,202 feet) above sea level, a unique climate for coffee growing. “In Yemen, you have a perfect balance of the warmth and shade that you need to create good coffee,” said Ezzi.

After changing color from green to red, the coffee cherry is picked by hand, a labor-intensive and difficult process. “This is why I have many children, the more hands the easier,” said Maisi giggling. He added, “I usually prefer to pick them myself, because if done incorrectly one can damage the stem or even the tree.” It needs patience, care and observation, and is very time-consuming.

Maisi rotates among the trees approximately three times a month, choosing only the cherries that are at the peak of ripeness. After harvesting, the cherries are cleaned and then placed in the sun to dry up to four weeks. Finally, he removes the last layers of dry skin.

Maisi does not toss away the coffee husk. Instead, Yemenis use every aspect of the coffee plant. The beans make traditional coffee known as Bun that can also be ground to fit different needs — French press, espresso, Turkish coffee and so on. From the husk, Yemenis make the popular coffee drink known as qishr, which is spiced with cardamom and ginger and known for its antioxidants. This is the most popular drink in Yemen. They also infuse the leaves to make a red tea-like herbal medicine for women with postpartum hemorrhage.

If a compromise is reached between short-term and long-term investment, between cultural authenticity and productivity and between local and international market needs, Yemeni coffee could regain its worldwide status.

On the way back to the nursery, in a rusty voice, Maisi joyfully sang Ayoub Tarish’s famous song: “Yemeni coffee, oh pearl, oh treasure above the tree; Whoever grows you, will never be poor or humiliated.”