Villagers consider arrival of Kurdish People's Defense Units (YPG) forces a liberation in light of the presence of al-Qaeda-affiliated groups. 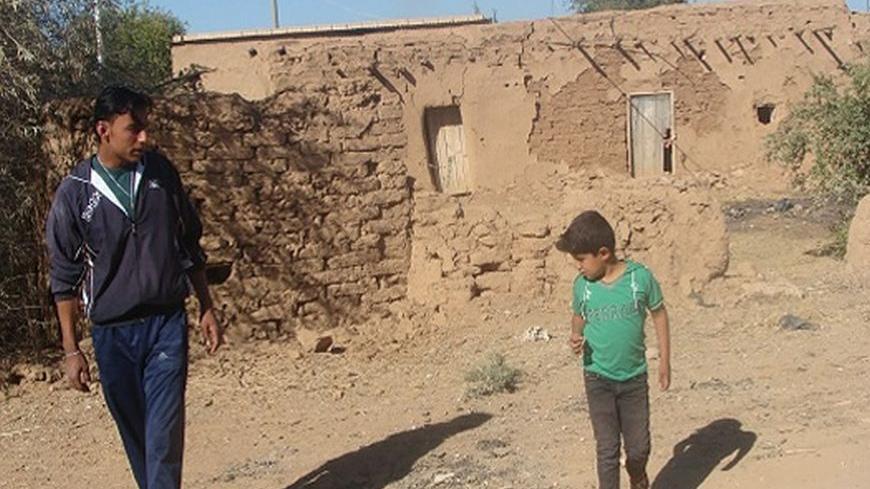 A youth and a boy walk away from a damaged building in Alouk, Oct. 12, 2013. - Wladimir van Wilgenburg

ALOUK, Syria — In the northeast of Syria, near the border with Turkey, Kurdish fighters of the People’s Defense Units (YPG) captured the Arab village of Alouk, close to the Kurdish-Arab inhabited city of Ras al-Ain (in Kurdish known as Serekaniye) from al-Qaeda-linked groups after on Sept. 14-18. The Arab villagers are thankful for the YPG support. “If there was no YPG, none of us would be here,” said villager Abu Hamza Kamal.

The mixed city of Ras al-Ain was taken over by YPG fighters July 16, after days of tension between Islamist fighters and the Kurds. The city was divided in a YPG- and an Islamist-controlled zone after agreement was reached Feb. 17 between the different factions. After the YPG took over, Turkey closed the border and sealed it off.
Reuters reported that Turkey is now building a wall next to the Kurdish areas in Syria to cease illegal migration. Kurdish sources say this wall is being build between the border gates of Qamishli-Nusaybin and Ras al-Ain-Ceylanpinar.

Pro-Kurdish sources suggest that the increased presence of al-Qaeda-linked groups, which tried to impose their views on the local population, led to the breaking down of the agreement between the Kurds and Islamist rebels. “As fellow Muslims, we are not against Arabs. But al-Qaeda wants everybody to be Muslim,” said YPG fighter Egid Qamislo, who joined the YPG one year ago.

After the YPG took over Ras al-Ain, Islamist groups such as Ahrar al-Sham, Jabhat al-Nusra and Islamic State of Iraq and al-Sham (ISIS) tried to take back Ras al-Ain and its border gate by trying to capture the Arab village of Alouk, control the strategic road between Derbisiya and Ras al-Ain and cut off the city from other Kurdish cities.

The Islamist fighters entered the village of Alouk, which is 4 kilometers (2½ miles) from Ras al-Ain on Sept. 14. “We all fled, they stole everything. The YPG helped us a lot, they are good people,” said Abu Ghalid, a villager. “They came to us and told us that they had come to free us from the YPG. We told them Alouk is an Arab village and that there is no YPG here,” he continued.

Other villagers say the Islamist armed groups came when everyone was asleep. They fled to the Turkish border, but came back after the YPG removed the armed groups from the village on Sept. 18. “They [YPG] secure our village and help our people,” said Abu Walid.

The YPG said in a statement that in Ras al-Ain the armed groups attacked the city from “five different sides — Til Halaf, Mushrafa, Chafa, Nadaf and Alouk — in a strategic planned attack to put military pressure on the city and separate it from other Kurdish cities.”

The Arab villages in Ras al-Ain were part of the so-called Arab belt policy of the Syrian government along the Iraqi and Turkish border. A report by the Kurdish nongovernmental organization Kurdwatch stated that a total of 140,000 Kurds from 332 villages in the province of Hassakeh were deported and replaced by Arab families. The policy was agreed upon in 1965 and got underway in 1973.

“The Arabs came from the Arab belt. Whoever is in power, they support them. Because the YPG leaves them alone, they appreciate them. But if they can choose between the YPG and the regime, they would choose the regime. But they appreciate the YPG from liberating it from the Free Syrian Army [FSA],” said Kovan Direj, a local Kurdish journalist.

“Only the FSA causes problems. We wish the situation would return to the past. Why did they come here, why did they want to free us? From what? There is nothing here. We never demonstrate. They came here to free us from the YPG, thinking it was a Kurdish village. They don’t know anything about us. They are being taught the YPG are unbelievers, they think everybody is an unbeliever,” said Abu Hamza.

The YPG has a small office near the road on the outskirts of Alouk. The YPG says they don’t want to hurt the Arab population, although the Arab villagers were brought by the regime. “For us, it’s a philosophy. We Kurds see the Arabs as brothers. The Kurds have always protected the Arabs, but the Arabs didn’t protect us. Now they build their own community. If they want help from us, we will help them.” said Qamislo.

The YPG fighters fiercely deny they want to remove the Arab villagers, Qamislo said. "The regime wanted to change the demography of the area, but we don’t want to change it.”

Both the Arab villagers and YPG fighters accuse the Islamist fighters of stealing everything. “Our ideology says they can have their own flags and schools, and teach their own language. The only thing we want from them is to regard the Kurds as their brothers.”

Aymenn al-Tamimi, a Shillman-Ginsburg fellow at the Middle East Forum, said that Islamist groups released a statement last summer in Tel Ebyad forbidding looting. “They said it was forbidden to seize the property of a Muslim brother, Arab or Kurd. So yes, likely some looting had occurred.” A statement by Ahrar al-Sham said they would deal with looters in Tel Ebyad with an iron fist.

The fighting in the mixed areas in Hassakeh shows the complexity of the conflict, and it seems that some Arab villages prefer Kurdish fighters over al-Qaeda fighters. “The YPG leaves the villagers alone, while al-Qaeda imposes their ideology,” said Direj.