A conference held in Amman, Jordan, about Christians and the Arab Spring revealed the many differences between Islamists and Christians over minority rights. 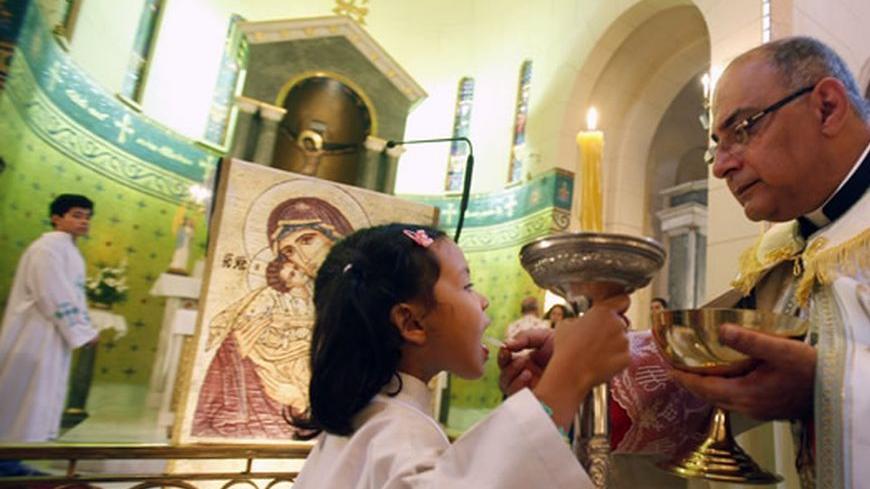 Islamists were in heavy attendance at the conference titled “Eastern Christians in Light of the Arab Spring,” which was held in the Jordanian capital, Amman, on Sept. 27-29 and attended by Al-Monitor. Islamists of various stripes came from several countries of the Arab East, including Egypt, Syria, Jordan, Palestine and Iraq. The attendees were looking forward to a genuine discussion between them and their Christian compatriots. At first, the Islamists kept silent, listening and observing. But the sensitivity of the issues that were raised forced them to break their silence.

With few words — mostly as an answer or a reaction — the Islamists seemed generally more rigid and more attached to their ideas than usual. But the interaction between the two sides was remarkable and revealed the barriers to dialogue. This is illustrated in the following examples:

One session’s chairman happened to be an Islamist deputy from one of the countries in the region. As all Islamists usually do, he started the session by reciting the Quranic Bismallah verse: “In the name of God, the Most Gracious, the Most Merciful.” Then he greeted the audience, “Peace [salam] be upon Muhammad and upon his family and companions and his followers.”

For Islamists, the “salam” greeting is a formality, part of their discourse and religious thought. But it marked an opportunity for one lay participant to open a dialogue with them. The layperson surprised the Islamist chairman by saying, “It seems that the theme of our conference and our dialogue as a whole was encapsulated by the chairman’s bestowing salam [peace] on ‘Muhammad, his family, companions and followers.’ Therefore, those who don’t follow Muhammad and don’t submit to him, what does he bestow on them other than salam? Is he bestowing 'war' on them?” It should be noted that the word salam in Arabic has two meanings: it is a greeting, and it also means the opposite of war.

The Islamist deputy did not seek to clarify his position or correct a possible misconception. He did not care to clarify that he meant “peace” for all humanity, and that he did not seek “war” with those of a different religion. It seemed as if he acknowledged and admitted the layperson’s claims. And the debate proceeded.

In another incident, a researcher presented the status of non-Muslims in Syria’s Constitution and laws. He explained how the Syrian Constitution requires the president to be Muslim. One non-Syrian Islamist angrily interrupted him, “But has Syria ever had a Muslim president in accordance with that Constitution? At the end of the day, the one who achieved power was not a Muslim but a Nusairi.” Nusairi is the word that Islamists use to refer to Alawites. The Assad family, which rules Syria, is Alawite.

At that point, one Syrian liberal oppositionist rose up and said to the Islamist, “Those words are unacceptable. As a Syrian oppositionist, I strongly reject them. Those words are discriminatory and provocative. First, you are not the one to determine who is Muslim and who is not. Second, our Syrian revolution is not a religious revolution of one sect against another. And third, you are not even Syrian, so you have no right to determine the true nature of our cause.”

One last example that illustrates the dialogue’s difficulties was the discussion about personal status laws in countries dominated by Islamists. The Islamists usually try to show that they are open to other groups by supporting, as a rule, that other sects are given their own personal status laws — whereby every sect is given its own laws governing marriage, divorce, inheritance, adoption, transfer of ownership and other family matters. But at the same time, the Islamists insist that Islamic law is a “major” or a “principal” source of legislation of the state. Discussion by Christian participants at the conference showed that this rule is not sufficient, fair or balanced. In fact, it often conceals a gradual process to subdue non-Muslim citizens in those countries by degrading the minorities’ demographic and geographic presence, Islamicizing society and eliminating pluralism.

All working papers submitted at the conference illustrated that problem. So an obvious question was posed to the Islamists: Do you accept, alongside your Islamic laws and alongside the personal status laws for other communities, that in your countries there is also one civil personal status law that is optional? In other words, do you accept that a person is given the choice to either follow the laws of his sect or leave his sect and resort to the civil law under the confines and protection of the state?

Faced with this question, the Islamists did not hesitate to assert their absolute refusal of the proposal: a civil law, even if optional, is forbidden — a person may not leave his religion. By “person” they mean a “Muslim,” because current laws allow non-Muslims to convert to Islam. Sometimes they even encourage it as a means to either escape harassment or obtain a government job reserved for Muslims, in addition to dozens of other reasons.

With the impossibility of having even an optional civil personal status code — since the idea is absolutely rejected — it seemed that dialogue with the Islamists was going in a vicious cycle of pleasantries and linguistic maneuvers. The Islamists did not hesitate to confirm they have the right to reach power as they see it and practice it. They kept repeating the following mantra: “We will only resort to democracy that emanates from the ballot box.” Many tried to explain to them that democracy is not just the ballot box, but the Islamists did not pay them much attention. The Islamists' main concern was to assert their rejection of what happened in Egypt and confront the rule of the “coupists,” as they call Gen. Abdel Fattah al-Sisi’s rule, against the legitimate authorities. Regarding the concerns of their fellow Christian citizens, it seemed to a large extent to not be part of their concerns today or tomorrow.