The two Syrian bishops kidnapped in April are still alive, according to new information, and Turkish authorities may be working to secure their release. 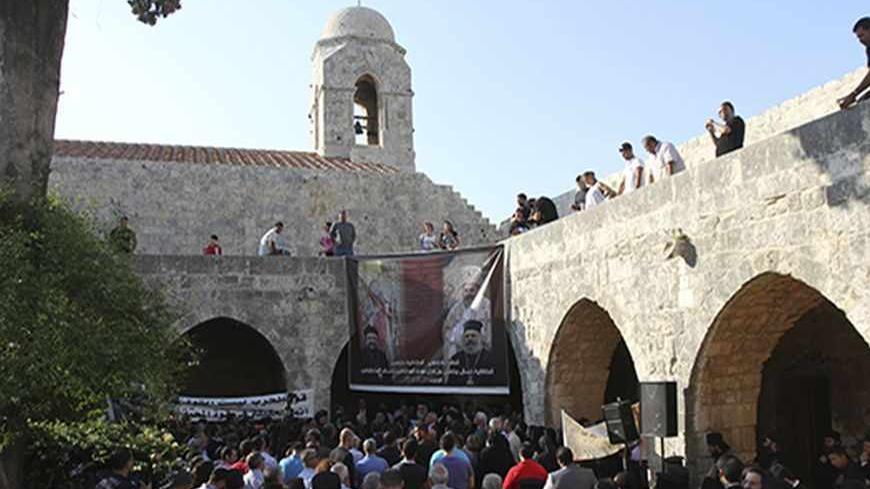 People attend a candle-lit vigil at the Balamand Monastery in Koura, near the north Lebanese city of Tripoli, to call for the release of bishops kidnapped in northern Syria, June 22, 2013. - REUTERS/Omar Ibrahim

BEIRUT — Al-Monitor obtained official information confirming that the authorities in Beirut have received reliable reports that the two bishops who were kidnapped in northern Syria on April 23 — Yohanna Ibrahim and Boulos Yazigi — are still alive. This information indicated that Turkish governmental and intelligence agencies provided information to Beirut about the health of the abducted Christian clerics. However, in the past few weeks, there was confusion among these agencies. The Turkish government had been mistaken regarding the identity of one of the bishops, confusing him with one of his aides (a deacon), who was killed by the abductors. On the other hand, a second intelligence party was confused regarding another detail.

For months, informants for these agencies had been providing the Turkish authorities with information that the two bishops were being held in a Syrian region south of Azaz, which was under the control of the armed opposition. These informants said that the abductors were regularly allowing the bishops to go out on short daily walks in an area that the informants for the intelligence agencies were surveilling. A few weeks ago, these informants noticed that these outings only included one man. This led some parties to infer that one of the bishops had been killed.

Just a few days ago, however, these agencies confirmed that their informants had once again seen the "two abducted men" taking a short outing in the area where they are detained. Thus, they were able to inform Beirut that the bishops are still alive. Yet the agencies did not provide any explanation for why one of the men was absent in the past — if it was due to an emergency health issue or if one bishop had been temporarily transferred to another group of kidnappers.

The official information provided to Al-Monitor revealed that the party who carried out the kidnapping on April 23 is the same group that is still holding the bishops now. It is an extremist Sunni group with links to Chechen jihadist groups that are now operating in Syria. However, the group that carried out the kidnapping experienced recently some developments in its organizational relations, especially after the severe fragmentation of jihadist groups and the increasing insecurity and chaos in northern Syria.

As for the nine Shiite Lebanese citizens who are being held in the Syrian region of Azaz on the border with Turkey, the same official information provided to Al-Monitor revealed that negotiations regarding these abductees with the Turkish authorities are ongoing. The information also indicated that a number of different parties are working to resolve this issue, including the Palestinian Authority under the leadership of President Mahmoud Abbas. However, these efforts have thus far been in vain.

The same information indicated that the Syrian authorities had responded to the Lebanese government's desires regarding meeting the demands of the abductors. The Syrian government released 23 female detainees in accordance with the kidnappers' demands, which did not end there. These demands have changed and been adjusted from time to time. For example, they once demanded a ransom of $100 million, which was subsequently reduced to $10 million. Later, they changed their demands and requested aid, with lost time always being the key factor.

Yet the official Lebanese information confirmed that the Turkish authorities are able to make a fundamental difference in resolving this humanitarian tragedy. In this context, this information predicts that in the next few months Ankara will work to change the way it is dealing with this issue. This time, it will deal with it seriously, truly striving to find a solution.

The official Lebanese information predicts that Ankara's shift will happen before March 2014 — the date of Turkish local elections. The Justice and Development Party (AKP), led by Prime Minister Recep Tayyip Erdogan, could try to use the issue of the Turkish citizens who were abducted in Beirut on Aug. 9 in the electoral campaign. Erdogan may seek to push for action regarding these two issues, resulting in an exchange of his citizens for the Lebanese abducted in Azaz, which may improve his chances at the ballot box.

The same Lebanese information points to the fact that the Lebanese Shiites, since their abduction on May 22, 2012, have been held by the same group that abducted them. This group is controlled by an official of an armed faction, known as Salim or Samir al-Amouri, who has close ties with the Turkish authorities. The desired resolution for this issue may require political timing, which Erdogan may see in the upcoming elections.