The Inevitable Has Happened In Egypt

With the latest developments in Egypt, the Muslim Brotherhood's gradual progression toward power is coming to a halt. 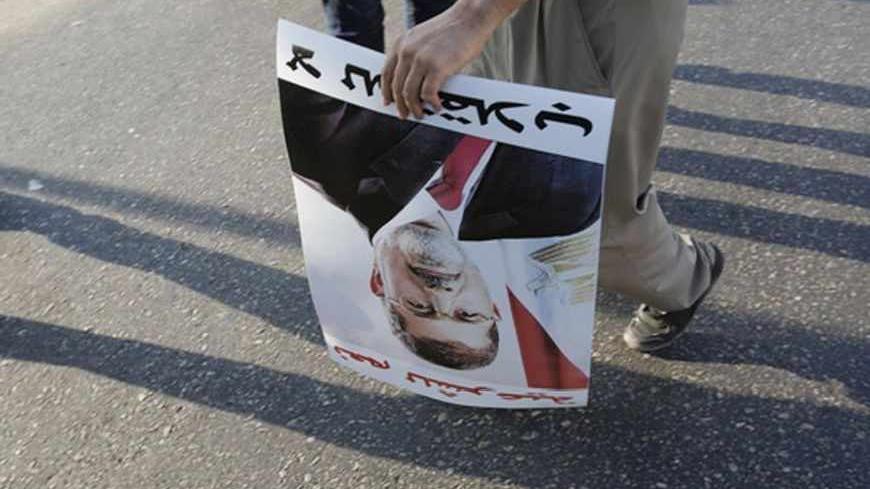 A supporter of deposed Egyptian President Mohammed Morsi holds a poster of him during a protest along Zahara Street in Cairo, Aug. 18, 2013. - REUTERS/Youssef Boudlal 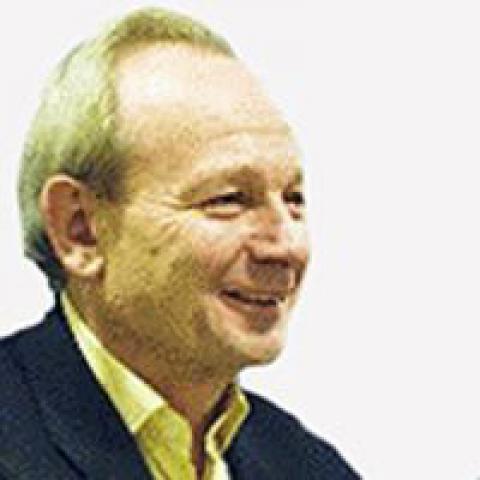 The expected has now occurred: a massacre of Muslim Brotherhood supporters by Gen. Abdel Fattah al-Sisi of such fierceness that he may well have imagined the cowed and psychologically seared demonstrators would return to their homes with their tails between their legs.

But the Muslim Brotherhood’s white flag is not in evidence. And as the arrests of the remaining Muslim Brotherhood leaders continues, the leadership of this, now, populist Islamist national protest will scatter and diffuse down to street level, with likely ugly consequences — not least for Copts who stood shoulder to shoulder with Sisi as he declared his coup.

The United States and the EU have misread the ground. They underestimated the visceral Gulf and Egyptian "deep-state" hatred for the Muslim Brotherhood, and their fervor to cripple the Muslim Brotherhood movement once and for all. By ignoring the clear signs that this antipathy was becoming deeply elemental, and instead attempting to wheedle through, by narrating Morsi’s overthrow as a "renewal of democracy" — to assuage the military through such "balanced" language — the United States and the EU have made themselves both look silly in the region, and have achieved a hearty dislike from all sides in Egypt.

If the immediate consequences of these events are unforeseeable — as the protest leadership dissipates to unknown street captains — there are nonetheless some pointers that emerge for the future of Sunni Islamism: Some 26 years ago, a debate began in the wake of the Soviet withdrawal from Afghanistan about the future course of Sunni Islamism. And an "idea" was born.

This week’s bloody events in Cairo undoubtedly take us directly back to that "idea" — and to a migration by younger Muslims from Muslim Brotherhood-style thinking toward the "idea." The "idea" was premised on the conviction that the post-Great European War Sykes-Picot "construct" for the region could never evolve into a "social contract" between people and government. The Middle Eastern "states" — so contrived at that time by the colonial powers — simply ran against the popular grain of belief systems, disregarded cultural history and ignored demography. In short, they could never form a true, legitimate "understanding" between a people and their government.

There has been, and is, in short, a rupture of the moral "social contract" evident since the 1920s. As a consequence, in this analysis, post-Sykes-Picot governments could only be sustained through repression and the violence of their security forces. The second component which fueled this debate was the shock, and excitement, for this group in witnessing the unexpected "implosion" of a major world power — the USSR in the 1980s. The obvious conclusion to be drawn from this experience was that the two major world powers were indeed vulnerable to overextend themselves both politically and financially through excessive hubris; through coming to believe in the illusion of their own narrative; through a loss of internal cohesion; and, above all, through simple exhaustion — lose the will necessary to sustain the elaborate mechanism of global hegemony.

This is what was believed to have happened to the former Soviet Union by Sunni thinkers at the time. They concluded from this experience that a deliberate program of "vexing and exhausting" Western power could potentially so inflame internal tensions, and exacerbate contradictions within the United States, that it too, would tire of its Middle Eastern entanglements — as had the USSR. Thus, they devised a calibrated action plan intended to provoke and "sting" the West into hasty — and hugely costly — military over-reaction; into blatant contradictions of their own "narrative" of benevolence, freedom and democracy; and into the fragmentation of their own internal cohesion through the deliberate playing upon Western internal contradictions — and the exposing of "the illusion" of US omniscience. Such psychological warfare, they believed, ultimately would lead to the exhaustion and the collapse of US influence in the region. And, flowing directly from this, Muslims would then witness the concomitant fall of Western proxies and allies — including in Saudi Arabia and the Gulf.

Just to be clear, the "idea" never encompassed any notion that the West would be driven from the Middle East militarily; this was dismissed. Rather, it was predicted that the United States would be forced to turn upon its own professed liberal "values" in pursuit of increased militarization, and thus exacerbate the internal contradictions inherent within US society. In short, the United States would eventually "retire" from the Middle East through internal exhaustion and contention within their own societies.

These thinkers clearly foresaw the violent societal convulsions that would ensue from the successful deployment of the tactics of vexation and exhaustion — and from militarized attempts to counteract them. But they also perceived that this strife and breakdown in order precisely would give the political, and geographic, space for local autonomous Islamic communities to emerge — subsequently, and rather grandly to be termed, "emirates." These often isolated and disparate Islamic societies, it was held, would continue through the era of disarray and civil convulsion, until ultimately the "nation-state" collapsed — and these separate molecules of Islamic society could fuse into a single, wider, Islamic entity.

In support of this thesis, writers pointed out that the victory against the Crusader states was accomplished exactly in this way of atomic, and initially uncoordinated, Muslim "emirates," ultimately uniting against the Crusaders, rather than by a single force such as that ultimately wielded by Saladin. As we take a tour d’horizon of the region — Syria, Lebanon, Sinai, Libya, Yemen, etc. — it is not hard to see that the phase of establishing autonomous emirate molecules, according to the "idea," is well-advanced.

This "idea" was called by the West "al-Qaeda." The idea was given a spurious institutionality in the West, which was not appropriate. Al-Qaeda at the time when these ideas evolved did not amount to more than 200 to 250 men, but the "thinking" has encircled the globe. In truth, the notion is not hard to grasp, and does not of course even require an institutional structure for its framework — as is assumed in the West. It is more a matter of proselytization, rather than institution-building in the Western sense.

Initially, this "idea" was considered the path forward to shake free from the remnants of Western hegemony by many in the region. But then there occurred a strong counter-reaction. And the very different thinking of the Muslim Brotherhood dating from the crises of the 1920s came strongly to the fore. After 9/11, many Muslims felt that the sole superpower had emerged — largely as a result of the Soviet implosion — a stronger, and definitely a more dangerous force. Most Muslims then believed that the Western reaction to 9/11 had made all Muslims, everywhere, worse off in every way.

The Muslim Brotherhood mode of coming to office through incrementally invading the arteries of power nonviolently then became the generally acceptable mode of addressing the grave problems of the region. Just to be clear: although the Muslim Brotherhood style movements disagreed sharply with the methodology of the "idea" — and particularly its readiness to accept collateral Muslim "damage" — and conversely, adherents to the "idea" viciously disapproved of the methodology of the Muslim Brotherhood, both were in agreement on the nature of the disease (the Sykes-Picot constructa) and on the ultimate aims: the establishment of Sharia and on insisting on emulation (whether literal or "virtual") of the early Muslim communities — as the model for contemporary society.

That was then. Today, the Muslim Broherhood is in complete disarray in Egypt and beyond — its doctrine of quietly progressing toward power with the cautious, half-reluctant blessing of the West, stands in ruins. After Algeria, Hamas in 2006 and now their overthrow in Egypt, they are facing a chorus of “we told you so; we have to burn the system to remake it.” Plainly, many disillusioned young members of the Muslim Brotherhood will now be prompted to revisit the "idea." They may well be convinced that Abdallah Azzam and others were right when they said that the regional proxies and allies of the West would never yield up their power voluntarily; and that Azzam was prescient in foreseeing the coming US exhaustion and fading influence. It is clear, too, that the "idea" is now evolving into two strands: one remains avowedly ready to match "savagery with savagery," while the other is the "soft power" version in the Ansar al-Sharia (supporters of Sharia) mode, which takes a gentler approach to the Muslim populations that find themselves bound up in the conflict, and which advocates greater "tolerance and compassion" toward Muslims coming under "emirate" governance.

What is so striking about this possible inversion from the accepted primacy of Muslim Brotherhood doctrine to an increasing, but still minority, adherence to the "idea" — essentially jihadist Salafism, a migration that has been in progress over the last two years — is that a quarter of a century ago, Saudi Arabia and the Gulf were supporting Islamists specifically against a secular superpower (the USSR). Now, here we are in 2013, with Saudi Arabia astonishingly in alliance with seculars and leftists, in a project to destroy a major strand of Islamism — albeit one at odds with "authorized" Wahabbism.

From the outset, bringing down the House of al-Saud was a principal objective set by adherents of the "idea." If events in Egypt lead, as they have so far, to greater convulsions in the Sunni world, it is not improbable that adherents of the "idea" will see Saudi Arabia to have overreached itself in Egypt (hubris); to have exacerbated the internal contradictions to its own narrative of leadership of the Islamic world (sponsoring Islamists in Syria, and its converse — the repression in Egypt); and to be exhibiting signs of "exhaustion" (excessive fear of vulnerability to the Muslim Brotherhood and the Arab uprising). If this is their conclusion, then the "idea" might suggest to its adherents that Saudi Arabia is now ripe for the implementation of "vexation and exhaustion" techniques.

Alastair Crooke is director of the Conflicts Forum. He was adviser on Middle East issues to Javier Solana, the EU foreign policy chief, from 1997 to 2003, staff member of Senator George Mitchell's fact-finding committee that inquired into the causes of the second intifada (2000-2001) and adviser to the International Quartet. He has 20 years experience working with Islamist movements, particularly Hamas and Hezbollah.