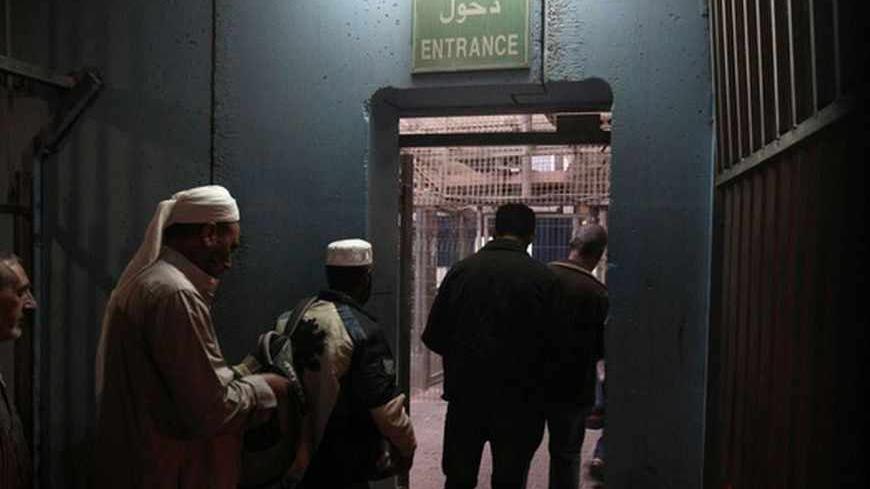 Palestinians wait to cross into Jerusalem at an Israeli checkpoint in the West Bank town of Bethlehem, July 7, 2013. - REUTERS/Ammar Awad

The Israeli government is very angry at the European Union. How could the Europeans allow themselves to undermine the negotiations with the Palestinians just as they are starting up again? Even Justice Minister Tzipi Livni, the brightest white dove in the government, chastised German Foreign Minister Guido Westerwelle Aug. 11 during his visit to Israel, for the decision by thirteen members of the EU to tag products manufactured in the occupied territories (excuse me, Judea and Samaria and United Jerusalem) and the sanctions that the EU placed on companies and organizations that operate in these regions. Livni complained that the Europeans are taking “unilateral measures” instead of allowing the parties to find solutions to their differences through direct negotiations.

It would be interesting to know if the guest asked Livni whether the government’s decision to include nineteen settlements in the map of national priority zones, which affords them extra privileges, was made in the wake of direct negotiations with Palestinian Chairman Abu Mazen (Mahmoud Abbas). Israeli Prime Minister Benjamin Netanyahu told the German minister that sanctions “toughen the Palestinian position.” What about the laying of a cornerstone for a new Jewish settlement outside the Jebel Mukaber neighborhood of east Jerusalem, or approving a program to build 1,200 housing units in the territories? Were these measures intended to soften Abu Mazen’s positions regarding east Jerusalem and the settlements?

Deputy Foreign Minister Ze’ev Elkin tackled the problem from another angle. He argued that these sanctions could harm the livelihoods of Palestinian workers who are employed in the settlements, something which everybody knows he simply cannot tolerate. In a meeting July 8 with Germany’s Minister of Economic Cooperation and Development Dirk Niebel, the deputy minister and settler warned that tagging products as manufactured in the settlements “would harm the Palestinian workers of these factories located in Area C … The closing of the factories could cause more than 22,000 Palestinian families to find themselves out of work. Ultimately, this will harm the economy of the entire Palestinian Authority.”

It is uncertain whether claims such as this will find an ear in Europe. More likely, it could remind the Dutch, Spanish, Portuguese, British and French of the excuses that they used during the colonial era to ensure that their African colonies could continue to exploit the local residents while they plundered the continent’s natural resources.

Rafi Levi is the owner of Mega Print, a factory that employs about seventy workers, including fifty Palestinians. He is not at all moved by this historical comparison. In an interview with Israeli economy daily The Marker for an article about the Barkan Industrial Park, which appeared Aug. 8 under the headline “Argument Over the Settlements? Europe Should Give Us a Bonus, Not a Fine,” Levi said, “Those Europeans who have pretensions of being concerned about the Palestinians aren’t thinking. When there is no more work here, who do they think will be the first to go home? I can take the whole factory and relocate it to an Arab village in the north [of Israel], and I’d still have minimum-wage workers. … But what about my workers here? They’d have to sit at home … Who will feed them? Abu Mazen?”

According to the information collected by Kav LaOved, between 2010 and July 2013, some 42 Palestinian workers at Levi’s factory submitted various legal complaints against him over employee compensation for a total of 1,677,652 shekels ($471,000). Similar lawsuits were brought against dozens of other factories located in the industrial zone of the occupied territories.

A special report published by Kav LaOved in December 2010 concerning the employment of Palestinian workers in the settlements revealed the very worrying phenomenon of helpless workers being systematically robbed of their due. The organization estimates that the state’s debt to Palestinian workers from 1970 until 2009 amounts to more than 8 billion shekels ($2 billion), factoring in an annual interest rate of 5%.

Employers transfer the gross salaries of Palestinian workers to the Payments Division of the Ministry of Industry and Commerce, which was founded in an effort to make the salaries of Palestinian workers in the Territories commensurate with those of Israeli workers. Based on the division’s own data, only 7.6% of the sums collected were transferred as required to Social Security (for pensions, disability, unemployment insurance, etc.) during the period under investigation. The rest of the money went into the Treasury. Furthermore, between 2000 and 2004, some 2% of the salaries of Palestinian workers went into the Fund to Encourage and Develop the Construction Industry in Israel even though, as day laborers, these workers should have been exempted from that tax. The fund’s money was used, among other things, to buy gas burners for IDF soldiers to cook on during Operation Cast Lead, a 2008 military action that left hundreds of Palestinians injured and killed.

In his annual report for 2011, in the chapter that deals with impingements on the salaries, rights, workplace safety and health of Palestinian workers in the settlements, the state comptroller gave a lengthy overview of the “generosity” of Jewish employers in the occupied territories. This is how the comptroller ended his report: “Failure to enforce the regulation regarding the minimum wage could cause unfair competition between those factories that take care to pay the minimum wage and those factories that pay less than the minimum wage. … The Civil Administration has not enforced regulations regarding workers-compensation insurance and has no oversight over Israeli employers regarding anything to do with their obligation to purchase insurance policies for Palestinian workers employed outside the Israeli settlements in the Judea and Samaria region, as required by this regulation.”

The comptroller emphasized that “Failure to enforce the law in these areas harms the image of the State of Israel and its status as perceived by international public opinion, and presents Israel as a country that does not take precautions to enforce the law and safeguard the rights of the Palestinians employed by it in the Judea and Samaria region.”

Of course, the state comptroller lacks authority over what harms Israel’s image and status around the world most of all: the very existence of the occupation regime and the fostering of the settlement enterprise, including factories in industrial zones that benefit from a state of lawlessness regarding their relationship with the occupied population.

I recently reported here about the agreement between US President Barack Obama and Netanyahu by which Israel will agree to withdraw from most of the occupied territories in nine months and the United States will remove the Iranian nuclear threat. Recent steps taken by the Israeli government are raising suspicions that Netanyahu has already gotten cold feet. It wouldn’t be the first time that happened. It will be interesting to see what Obama’s next steps will be.