While many analysts inside and outside Syria seem to assume Syrian Alawites support President Bashar al-Assad’s Baathist regime, the reality on the ground is much more nuanced. 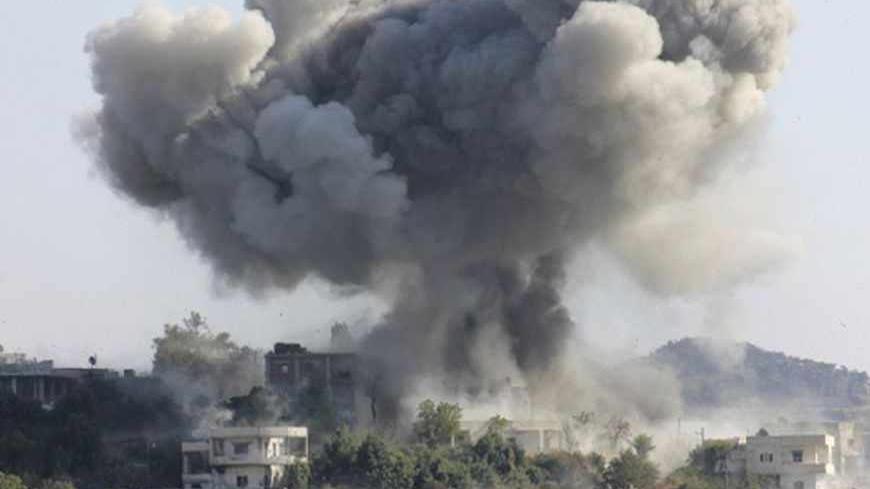 Smoke rises after what activists say was shelling by forces loyal to Syria's President Bashar al-Assad in the village of Dourit, in Latakia countryside, Aug.17, 2013. - REUTERS/Khattab Abdulaa

The Syrian regime is known as a Baathist secular regime that has tried to create an inclusive Syrian national identity consecrated by an Arab nationalist Baathist ideology that is immunized by socialism and secularism. The regime intended for this identity to be inclusive and shared by all components of the Syrian people and prevail over the sectarian divisions seen in Syria in previous eras — especially during the French Mandate, when the French established two states: one for Alawites and another for Druze in other parts of the country.

The regime led by late President Hafez al-Assad mainly relied, to consolidate its rule, on Alawites enlisted in the army and security services and employed in some administrations as well as within the Baath Party. However, the regime dealt with sectarianism in the country with extreme sensitivity and took into account the fact that Sunni Muslims are the majority of the Syrian population. Moreover, Hafez al-Assad used to say he was of the Shafi'i madhhab, the religious sect of the majority in Syria, and his son Bashar is also keen to attend prayers at public events, according to the Shafi'i doctrine.

A well-informed Lebanese source told Al-Monitor that when Hafez al-Assad's mother Naasa died, the president of the Supreme Islamic Shiite Council, Sheikh Muhammad Mahdi Shams al-Din, wanted to lead the funeral prayer, but Hafez told him that his mother was a Sunni Shafi'i. Some said that this was a sign of piousness and a formality to please the Sunnis, yet such a move shows the keenness of the Syrian regime during Assad’s reign to take into account this sectarian sensitivity, despite the secularism of the regime, the party and the family.

Another Shiite Lebanese source informed Al-Monitor that the Syrian authorities have tightened control over some Lebanese Shiite clerics who tried to spread Twelver Shiism among Alawites in Syria during the years preceding the Syrian crisis. This measure attests to the regime’s caution in dealing with sectarian sensitivities and its utmost concern to prevent the spread of religious extremist groups.

Furthermore, an Alawite Syrian journalist told Al-Monitor that the regime has established a power balance between Alawites and Sunnis. The Sunnis obtained most of the official positions and ministries — except for the presidency — while Alawites held onto sensitive positions in the army and security services. Moreover, it is worth mentioning that the Sunnis dominated the country's economy, in Damascus, Aleppo and other regions.

On a different note, in an article published by Al-Hayat, Ali Melhem, a Syrian writer, revealed that the shabiha groups acting in support of the regime are not only Alawites, but that the largest proportions of these groups are members of the Sunni sect.

Despite the Alawites’ limited contribution to the opposition, in an article published by Al-Joumhouria, Syrian oppositionist Sadiq Abdul Rahman said that Syria has entered the phase of a complex civil war that is clearly sectarian-oriented. He said that the term civil war does not mean that this uprising is not a revolution; however, it “is no longer a Syrian national revolution, at least as far as Syrian nationalism is understood. The revolution has overtaken the idea of Syrian nationalism, showing its fragility and the weakness of its rhetoric.”

In the article, Abdul Rahman criticizes the overall performance of the opposition and says it is based on the fragile structure of Syrian society and the mangled Syrian national rhetoric. He calls for a political project and a new rational discourse that reformulates Syrian national identity. This means abandoning the secular and pluralistic discourse of the regime that used to take into account or ignore sectarian sensitivities.

Perhaps the regime’s neglect of the growing Sunni vigilance, in rural areas in particular — which emerged in light of the Arab Spring revolutions — has led it to this sectarian civil war. Note that there are other foreign and strategic factors related to the regime’s alignment with the axis of resistance, along with internal political, economic and social factors related to the one-party rule, the security repression, corruption and the marginalization of rural areas including the Alawite areas. President Bashar al-Assad has acknowledged some of these errors and practices.

An Alawite employee who lives in Latakia told Al-Monitor that Assad is only Alawite in name, and that the situation in the province of Latakia is worse than in the other provinces, noting that the relatives of the president have seized all of the province’s institutions and investments. She pointed to the corruption plaguing some of them, and added that corruption is rampant throughout Syria and that it is not the corruption of one sect, but that of a regime that includes corrupt people from all sects. She argued that Alawites are now paying the price for this.

The employee accused foreign powers, especially the United States, of wanting to turn the conflict into a sectarian conflict to overthrow the regime. She said they are taking advantage of the fact that there is already a stage for such a scenario. She noted that what contributed to the promotion of sectarianism is the establishment of tens of thousands of mosques in the country, in reference to the growing Sunni Salafist and Islamist fundamentalism over the last two decades.

The Alawite employee fears that the fall of the Assad regime would lead to al-Qaeda controlling the country, and thus lead to its destruction. She says that changing Assad would mean the destruction of the country and lead to an all-out sectarian war.

This Alawite woman's condition applies to most of the Alawites in Syria. They complain about the corruption plaguing the regime and the neglect of Alawite areas. They fear, however, the fundamentalist and Salafist alternative embodied by al-Qaeda and Jabhat al-Nusra, or a rule dominated by the Muslim Brotherhood. According to them, this would lead to the destruction of Syria, their persecution, massacres targeting them and killings and displacement, as is currently happening in some villages in the countryside of Latakia.

There are conflicting reports about the proportion of Alawites in Syria, but they range between 12% and 15% of the population, whereas Sunnis account for 65% to 70%. The other minorities account for about 15% to 20%. Most Alawites live in Latakia and some villages in rural Hama and Homs, but during the last 50 years, a large number of Alawites migrated to the capital Damascus, where they found jobs in the army, police force and government departments.