Iranian President-elect Hassan Rouhani will consider improved ties with Iran’s neighbors as a priority in his foreign policy. 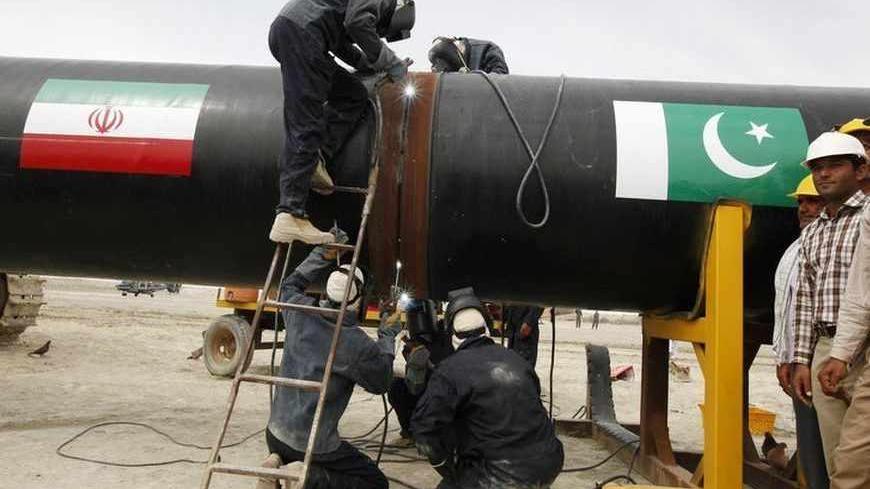 Workers weld the pipeline during a groundbreaking ceremony to mark the inauguration of the Iran-Pakistan gas pipeline, in the city of Chabahar in southeastern Iran, Mar. 11, 2013. Top Iranian and Pakistani officials marked the start of Pakistani construction on the much-delayed gas pipeline, Iranian media reported, despite US pressure on Islamabad to back out of the project. - REUTERS/Mian Khursheed
Abbas Maleki
July 13, 2013

With a new moderate president in office by August, Iran will rebuild ties with its neighbors through an assertive and constructive diplomacy. In his first interview with the press, President-elect Hassan Rouhani stressed the need for Iran to improve its regional ties. Promoting regionalism, he said, will open new markets to Iran and help its drive to push foreign forces out in order to secure Iran’s primary national interest, which is stable relations with its neighbors.

Iran’s central geopolitical location is unique to its ability to promote regionalism, with the Persian Gulf to its south, and Central Asia and the Caucuses to its north. Within this region, 11 key states neighbor Iran, including the six Arab States of the Gulf Cooperation Council (GCC). Iran’s adjacent or close neighbors total 15 if we include Azerbaijan, Armenia, Russia and Kazakhstan.

The potential to expand relations with each and every one of these states is immense and, regrettably, largely untapped in light of the primacy of their relations with the United States. But this does not and should not mean that Iran cannot develop better relations with its neighbors despite its hostile history with the US.

1. Insisting on the need to preserve the territorial integrity of all regional states based on respect for the indivisibility of their borders given the constant threat of war in the region, specifically US and Israeli threats of war against Iran;

2. Finalizing a collective non-aggression pact to ensure that regional states will forbid foreign forces use of their airspace to launch an attack against other regional states;

3. Proposing that Iran, Iraq and Yemen join as observers of the GCC, a security and economic body established in 1981 among the six southern Persian Gulf Arab states.

In Greater Central Asia, Iran is a part of the "Greater Khorasan," along with Afghanistan, Pakistan, Kazakhstan, Uzbekistan, Tajikistan, Kyrgyzstan and Turkmenistan. To this day, Khorasan remains Iran’s largest northeastern province, which shares with its Central Asian neighbors a rich Persian cultural and literary heritage. Iran is therefore an integral part of this area’s history, land and ethnography.

In addition, the region offers Iran great potential to enhance rail and land transport for the exchange of local goods to form new markets. The region can also serve as a major energy hub, specifically with natural gas for Iran, China and Russia. By developing an integrative transportation system inclusive of land, air and sea, Iran could help the region connect with the Indian Ocean, the Sea of Oman and the Caspian Sea. Iran already possesses a large road and rail system that connects Khorasan with its ports in the Persian Gulf, including in Chabahar and Bandar Abbas, which it can lease to its neighbors and derive transit and customs revenues.

Iran’s relations with Pakistan unfortunately offer the least potential. Despite Pakistan’s strong national identity, the political turmoil in the country, as well as continuous US drone attacks in the north, has barred Pakistan from tapping into its common Islamic and Asian heritage with Iran to conduct a foreign policy that promotes regionalism. Iran and Pakistan could still work together to secure their common borders against drug traffickers and terrorists, and should US-led sanctions against Iran roll back, the two countries could seal their delayed natural gas pipeline that would transfer the resource to Pakistan and India.

For Iran’s regional relations with Russia to grow, the two states must use the Caucuses as a corridor for their strategic ties. Despite international restrictions on Iran, Russia is a world power that has offered its support to the country. Yet, so far, the Iranian-Russian partnership has remained largely confined to bilateral relations when there is great potential to explore multilateral ways of expanding those ties.

For example, Iran could work closely with Russia to influence developments in the Central Asian and Caucasian republics. Azerbaijan in specific is an important northern neighbor to Iran. A calculated and constructive relationship with this republic could protect Iran from political and secessionist threats from the north given Azerbaijan’s vulnerability to anti-Iranian US and Israeli influences, to which Russia is also opposed. In addition, Azerbaijan, Armenia and Georgia could serve as Iran’s energy transit route via land to Europe as long as US-led sanctions against Iran’s shipping companies persist. To secure that deal, Iran and Russia should agree on a market sharing mechanism in the gas sector.

Turkey is a critical state for Iran, and the two countries’ economic complementarities can be explored further. Iran offers Turkey its largest Middle East market given its population of over 70 million, which Turkey cannot ignore. To say that Turkey will forego ties with Iran in favor of its NATO alliances, as some Western analysts will presume, is an overstatement. From the days of the Ottoman Empire in the 19th and 20th centuries, Persian and Turkish rulers have conducted trade independent of the foreign power influences over them. Iran is now in a position to explore better ties with Turkey’s Justice and Development Party, given their common Islamic orientation, and help the party de-escalate tensions in the Middle East, particularly over Syria where its political miscalculation of supporting the armed Syrian rebels with US encouragement has led to a fallout with the main Turkish opposition, the Republican People’s Party.

Iran's new government should conclude that the country's only viable approach to foreign policy is to promote regionalism. If Iran wants to become the "indispensable regional player in the region" as its Future Vision Document says, it will need to design new policies for better and closer ties with its neighbors. Its neighbors have extended their hands to Iran by warmly congratulating its new president-elect on his victory. These are welcome signs indeed, and now it is up to Iran to seize the opportunity for a new era of regional cooperation.

Abbas Maleki is an associate professor at Sharif University of Technology in Tehran and senior researcher at Harvard Kennedy School of Government, Cambridge.