The Syrian war has already come to Arsal and Hermel. 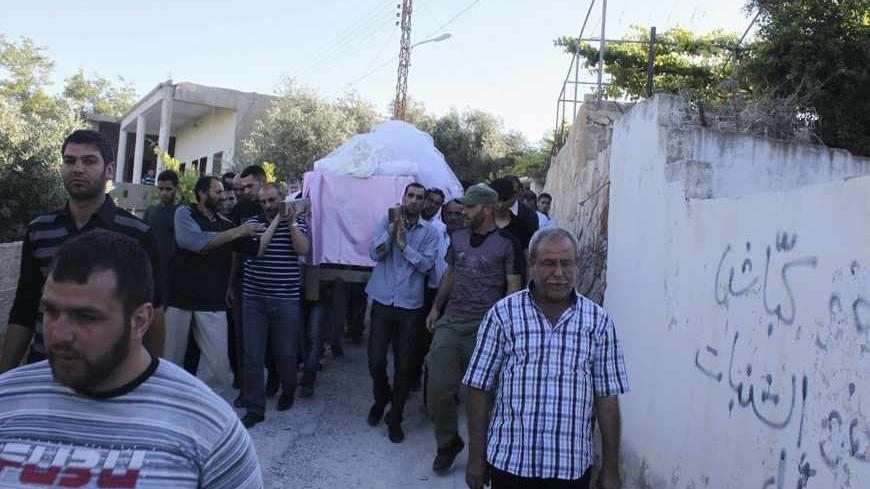 Relatives of Lulu Abdallah Awad carry her coffin during her funeral in Hermel, Lebanon, May 28, 2013. Several rockets were fired into Hermel, and one of them killed Lulu and wounded two people, the Lebanese army said. - REUTERS/Rami Bleibel 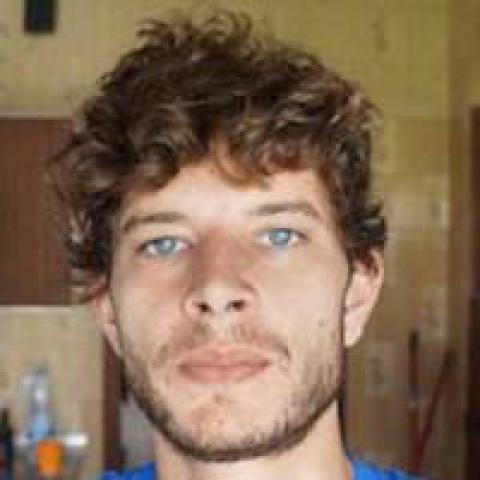 ARSAL, Lebanon — In a former classroom in Arsal, Sekra al-Ahmad, 60, gently grips the forearm of her grandson. With her other hand she gently applies a lotion to a shallow wound near the child’s elbow, the result of government shelling that claimed the life one of Ahmad’s other grandchildren in Qusair. As lotion meets flesh he begins to resist.  But Ahmad tuts away the boy’s protests and continues with the task at hand.

Three other families congregate alongside Ahmad’s in the classroom, part of a disused school complex leased by a local sheikh to cater to the growing influx of Syrian refugees into the area. The classroom now serves as an all-purpose salon, bedroom, kitchen, and bathroom. Others sleep out in the courtyard in tents.

Ahmad left Qusair 15 days ago as fighting between the Syrian army backed by Hezbollah and the Free Syrian Army (FSA) escalated in Homs province.

“We left without anything. We did not even have time to take the injured to the hospital.  We just left them there on the ground,” she said.

Ahmad reflected on how times have changed since 2006, when families from Qusair provided Lebanese Shiites fleeing the Bekaa and south Lebanon safe haven in their homes during the Israeli-Hezbollah conflict.

“We never had problems with Hezbollah. In 2006 we let Lebanese Shiite families stay in our houses. We gave them shelter and food. But it wasn’t enough — now they want to take our houses and see our destruction,” she said.

As fighting between the Assad regime backed by Hezbollah and the FSA has intensified in Qusair, Syrian refugees – both supporters of the embattled Syrian regime and the opposition FSA — have flooded into Lebanon’s Bekaa Valley, seeking refuge among communities favorable to their plight. Their arrival has served to sharpen the political dividing line in Lebanon. From Akkar in the north down to Lebanon’s  Bekaa hinterland, various communities, with their differing allegiances, are increasingly being drawn into the Syrian conflict.

Many of the 200 Syrian refugees alongside Ahmad in the school complex fled Qusair as Hezbollah increased its involvement in the province of Homs. They express anxiety over their predicament in Arsal — a bastion of pro-FSA support in Lebanon’s Bekaa Valley, the birthplace and nucleus of the Lebanese Shiite party.

Tit-for-tat kidnappings — related to events in Syria — have reared their head in the Bekaa Valley over the last few months. Arsal has also witnessed the occasional cross-border shelling while growing reports suggest that female refugees have increasingly been subject to rape and abuse in the area. In the latest sign of growing tension along the Lebanese-Syrian border near the town, where support for the Syrian opposition is strong, unidentified gunmen attacked a Lebanese border checkpoint on May 27, killing three soldiers.

Sitting in a classroom adjacent to Ahmad was Abu Jafar, 31, who fought with the Ahrar al-Sham brigade of the FSA in Homs before coming to Arsal nine days ago with his family.

“People came to Arsal because it is relatively safe for them here and the people sympathize with them. But outside the town it is different,” said Abu Jafar.

“To register with the UN, people have to go to Zahle. Not only do people not have the money, they are scared of the journey. Hezbollah controls all the roads in the area and there is no one to protect us.”

Beside Abu Jafar was  Mohammad Khaled, 34, who defected from the Syrian army in the summer of 2012 before joining the FSA. Khaled said  that he was only going to be in Arsal for a short period of time to rest and recuperate before returning to his brigade in Qusair.  He spoke with anger of Hezbollah’s involvement in Syria.

“They are Hezb al-Shaitan (the Party of Satan), not Hezbollah (the Party of God). If they knew God they would not do these things.”Khaled’s father and brother were killed by regime forces while fighting with the FSA in Homs province. He said, stoically, that he is happy that they have been martyred, while also noting that the endless cycle of death and destruction is destroying his country.

“How much should the Syrian people stand for?” Khaled asked rhetorically with a shake of the head before answering his own question.

“We will resist until our last drop of blood.”

Thirty kilometers (19 miles) from Arsal, Hermel’s main street is flanked with the iconic yellow and green flags of Hezbollah. Ali Zaiter, a former head of Hermel’s local council, sits in his dentist’s surgery. A small flat-screen TV attached to the dentist’s chair is tuned to Al-Manar, Hezbollah’s TV channel.

Hermel has increasingly been subjected to cross-border shelling by FSA units as Hezbollah’s involvement across the border has grown. On May 27, a 17-year-old girl was killed and four injured when a rocket slammed into a residential neighborhood of the town. Despite such events, Zaiter describes the situation in the town as relatively calm — a phenomenom he partly attributes to the Syrian army’s securing of the border around Hermel as hostilities in Qusair have intensified.

Zaiter gave short shrift to suggestions that Hezbollah’s activity across the border coupled with the FSA presence in the Bekaa could have a potentially destabilizing effect on Lebanon.

Not everyone in Hermel was taking the situation quite so easily.

Sitting in a Hezbollah safe house on the outskirts of Hermel Zeinab Abbas, 45, clasped her hands together tightly in her lap. A large portrait of the founder of the Islamic Republic of Iran, Ayatollah Ruhollah Khomeini, and his successor Ayatollah Ali Khamanei, covers one wall;  another is adorned with a portrait of Ali, the fourth Islamic caliph revered by Shiites.

Outside, only 300 yards away, men on motorbikes can be seen traveling across the Lebanese-Syrian border — controlled on one side by the Syrian army, on the other by Hezbollah — with casual ease. Qusair is clearly visible on the horizon. As Abbas spoke, men dressed in military fatigues passed intermittently through the salon into the back rooms of the building.

Abbas left Homs a year ago. She has lost her home, a son and a nephew over the course of Syria’s civil war — killed fighting against the FSA in Homs province. Both she and her husband, Mahmud, use the Arabic word for terrorist to describe the Syrian opposition.

“I feel the loss most when I am at home and by myself and I realize he is not here anymore,” said Abbas, contemplating the loss of her son.

“I asked him not to go (to fight) but he said he wanted to defend his land, his country. I am proud that he is a martyr,” Abbas continued. “But the worst thing that can happen to a mother is to lose her son.”

Like the refugees in Arsal, with their contrasting allegiances with the Syrian opposition, Abbas expressed a fear of being kidnapped if she leaves Hermel.

“We came here thinking we would find peace and that the situation would not be the same as in Syria, but sometimes I feel more scared here than I did in Homs,” Abbas said before reflecting on current events in Qusair.

“I hope that the situation will improve. I hope we can return to the same situation as before the war with the same regime. But it is now a war between communities — religious and political. The situation has become so divided that if they have to kill one person from a particular family, they kill everyone, even the smallest child.”

Ahmad’s sentiments are echoed by other refugees in Hermel.

On the outskirts of town, standing outside the shawarma shop where he works, Ibrahim Jibril, 31, referred to the Syrian opposition using the same terminology as Abbas. It is a terminology the Assad regime has increasingly promoted through its media channels as Syria’s civil war has continued, fracturing once-peaceable communities along political and sectarian lines.

Born in the Palestinian refugee camp of Yarmouk, Jibril left Damascus in the summer of 2012 as FSA units took control of areas adjacent to the camp. When asked whether he plans to return to Damascus, Jibril’s answer was straightforward.

“I would like to return to Damascus because I do not feel at ease here. But it is not possible to return until the regime regains control.”

Martin Armstrong is a former feature writer for the Lebanese Daily Star currently based in Beirut. His work has been featured in publications including Open Democracy, VICE, Dazed and Confused, and the Chicago Tribune. On Twitter: @scotinbeirut 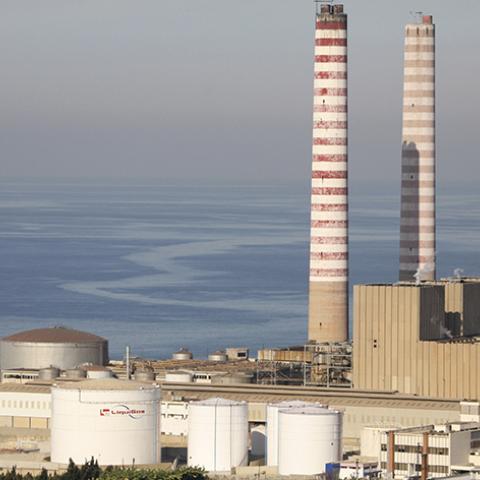 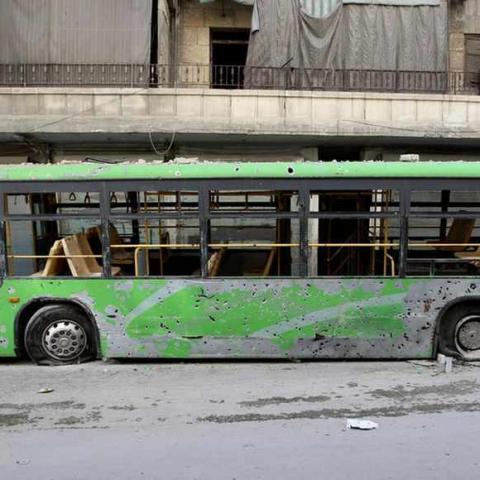 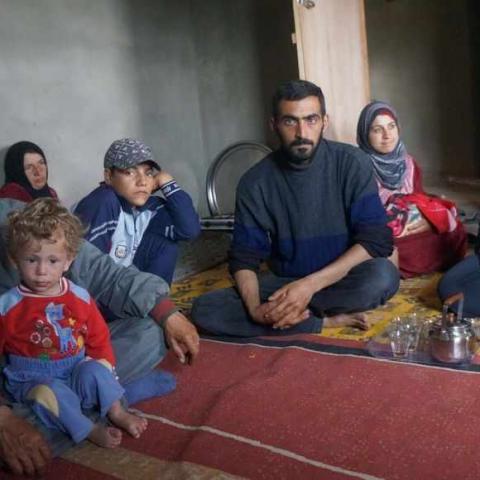