Kerry Breaks the Ice in Moscow; Russia Sticks to 'Principle' on Syria

US Secretary of State John Kerry's visit to Moscow came in a context of genuine good will, although the US and Russia still differ on the sequencing for a transition in Syria, writes Fyodor Lukyanov. 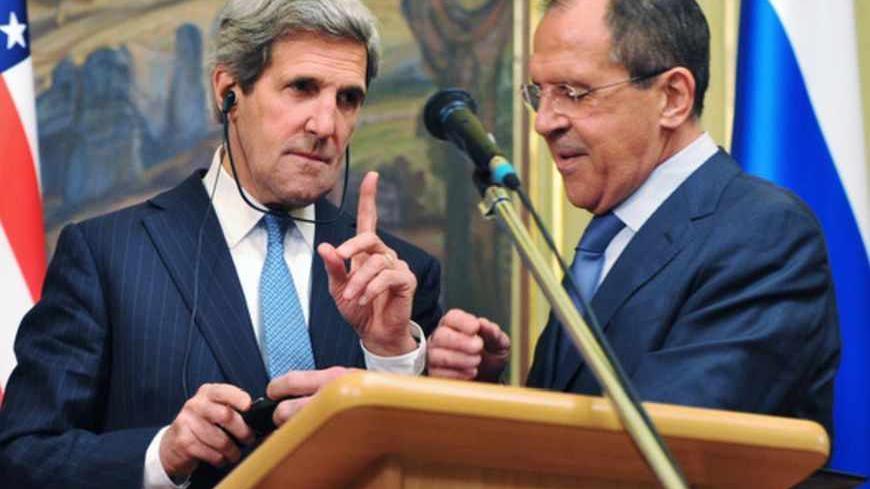 US Secretary of State John Kerry (L) gestures as Russian Foreign Minister Sergey Lavrov tries to fix his translation equipment during a joint news conference after their meeting in Moscow May 7, 2013. - REUTERS/Mladen Antonov

It has been a long time since statements by Russian officials regarding Russian-American relations have sounded as good-natured as they did after the negotiations in Moscow with US Secretary of State John Kerry. Sergey Lavrov found the American guest to be in a cooperative mood, and both sides acknowledged that his negotiations with Russian President Vladimir Putin were full and substantive. On the Syrian question, they spoke in unison: Peace is the only option, the conflict threatens to create a failed state, consideration should be given to the idea of convening an international conference and both Moscow and Washington are committed to the Geneva conventions and will continue to look for a solution that is acceptable to all.

Given the state of Russian-American relations in recent months, the allegations of the use of chemical weapons in Syria and Israel’s interference in the conflict, compromise seems doubtful. Russia’s position is certainly not changing; for over two years now, it has held firmly to a single set of postulates, and all hope to detect movement in its approach has been in vain. Rather, it is the US that is refining its point of view — not due to Russia, but as enthusiasm wanes regarding what Syria might look like after Syrian President Bashar al-Assad leaves. Still, Kerry’s visit should be seen as highly symbolic, both for relations between Washington and Moscow and for the outlook in Syria.

With respect to Russian-American relations, the positive atmosphere is due to the fact that the agenda has become very narrow. The system that has guided this relationship for several decades has run its course. One axis of this grid was strategic military parity, and the other was ideology. Today, both of these fundamental concepts are in question. Parity still has significance as a symbol of the exclusivity of the Russian-American relationship. But the New START Treaty, ratified in 2010, was probably the last treaty of that type that continued the tradition of the 1970s and 1980s. Now, Russia does not intend to resume negotiations on arms reductions, and the reason for this is not only the American anti-missile defense program (yet another relic of the past era), but the existence of rising nuclear powers, primarily China.

Something similar is also happening with ideology. Russia no longer talks about its commitment to Western values and Obama sees no point in trying to change Russia. He has no reason to because from his perspective, Moscow plays only a supporting, albeit fairly important, role in the implementation of US foreign-policy strategy. This is the source of the reluctance to get seriously involved in the “struggle for human rights” under the banner of the Magnitsky List. The administration prefers to maintain its working relationship with Russia in order to resolve specific issues, and the White House is not interested in trying to turn the Kremlin into a like-minded ally, just as it has no plans to use criticism on issues of democracy as a battering ram in service of certain goals.

As a result, this relationship has been reduced to the classical diplomatic form: efforts to resolve regional crises. Strictly speaking, soon Russia and the US will have no more bilateral issues, but will only work together on international ons — Syria, Iran, Afghanistan (for at least another year and a half) and North Korea. Nothing less, but also nothing more.

This has its advantages and disadvantages. The upside is that the countries can work to resolve the conflict in isolation, without burdening this process with complications. Take, for example, democracy in Russia. Kerry’s meeting with non-governmental organizations, which are currently being subjected to pressure by the authorities, seems more like an obligatory ritual than an attempt to really get involved in this matter. It is no coincidence that Putin said he is eagerly awaiting a meeting with Obama and is hoping for a significant improvement in relations. If his counterpart is not pushing on domestic matters, the Russian president is usually open to a constructive approach.

What does this mean in the case of Syria? When the Kremlin repeated month after month that it does not support Assad, but rather supports a principled approach to resolving the conflict, the world interpreted this as an evasion. In fact, the Russian position is based on two propositions. First, outside forces do not have the right to impose any solution on the parties to the Syrian conflict. Rather, they should help them reach a solution that they can then implement. Second, it is likely that there are simply no good scenarios in Syria, and the objective should be to minimize losses.

In practice, to simplify, this means we can say that Russia and the US differ today on only one issue: the sequence of actions. First Assad leaves, then the process of establishing a new political regime in Syria begins, or the other way around. Moscow supports the second version, and Washington the first. As strange as it seems, they are in agreement on everything else: After Assad, there is a risk that Syria will become ungovernable, and the goal of outside forces (but probably not its neighbors in the Persian Gulf) is to prevent power from falling into the hands of Islamic extremists.

However, this one difference is not a procedural detail, but a matter of principle. Which is paramount, processes within the framework of a sovereign state, or the influence of outside forces on it? For Russia, which adheres to classical principles of international relations, the answer is obvious: Sovereign rights are inviolable.

This does not mean that nothing can be done until Damascus gives its consent to the peace process. During the Syrian crisis, Russian diplomats have referred more than once to Dayton, where the leaders of the opposing sides were locked in a room and not let out until they agreed to the framework for a new Bosnia. Of course, they were also subjected to intense pressure, but from Russia’s perspective, the point is that no one was excluded from the process beforehand as a “pariah.” Some version of this model could be used in Syria. Surely, history does not repeat itself exactly, but this provides a basic concept. In the current situation, it means we cannot factor out Assad’s representatives (or Assad himself — they dealt directly with Milosevic) and Iran, the key players.

For the US, this seems unacceptable, but it is clear that the Obama administration still does not want to become deeply enmeshed in the Syrian conflict. It certainly cannot ignore the problem, so active diplomacy with Russia provides a good opportunity to be involved without risk. The serene atmosphere of the negotiations with Kerry reaffirms that the diplomatic process is not at a stalemate, so we should not do the bidding of those who wish to intervene.

Given that, as mentioned above, Moscow has not budged from its initial position in two years, it also has an interest in the success of this process. Russia’s position will be vindicated only if a political solution is found in Syria. Then we will be able to say that Russia’s prolonged efforts to uphold its principles and interests ended in success. If the Syrian conflict ends in collapse — with or without direct outside intervention — Moscow will surely distance itself, and its meticulous work over more than two years will have been a failure. So the optimism with which the ministers glowed after the meeting has a certain objective basis.