Whether or not Israel planned to ambush the US on Syria's chemical weapon use, the result has been successful in moving the US closer to Israel's position, writes Alon Ben David. 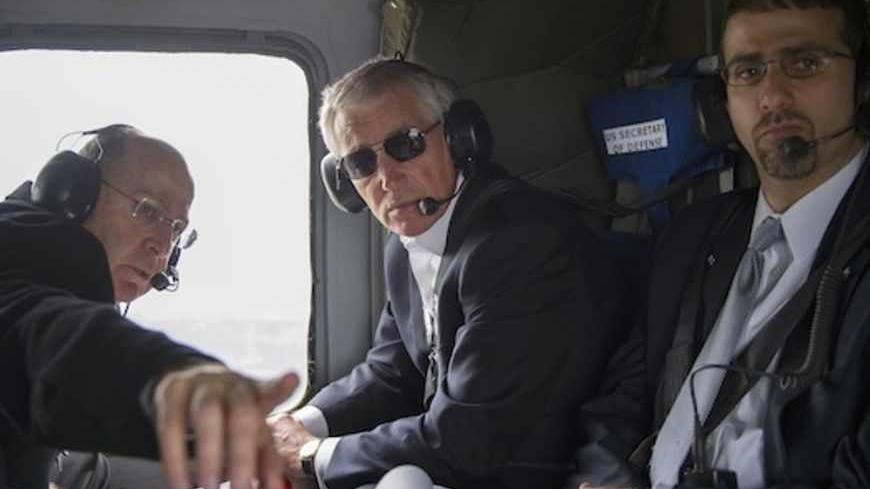 US Secretary of Defense Chuck Hagel (R) and his Israeli counterpart Moshe Ya'alon (L) look out of the window during a helicopter tour of the Israeli-annexed Golan Heights, April 22, 2013. - REUTERS/Jim Watson

By stating that Syrian President Bashar al-Assad had used chemical weapons, Brig. Gen. Itai Brun, the director of Israel’s Military Intelligence Research Department, cornered the Americans. Washington finally — and very tentatively — admitted that such weapons had been used. If Israeli Prime Minister Benjamin Netanyahu planned to ambush the Americans, it was a phenomenal success. From an Israeli standpoint, this was a chance to test America's supposed "red line," although it's doubtful that American recognition of the use of chemical weapons against Syrian civilians will culminate in a military intervention.

On the afternoon of March 19, as Syrian insurgents began to disseminate photos of an attack by the Syrian military in Aleppo, Israeli intelligence bodies already knew that nerve agents had been used against civilians, and probably not for the first time. That intelligence was based on the analysis of video footage following the attack, which documented the victims' symptoms, but it was also based on intelligence Israel had obtained.

As is common practice in such cases, Israel’s intelligence agencies shared this information with their American and European counterparts to compare the data. The Israelis and the British reached a clear conclusion: Assad’s military had used sarin nerve gas against civilians, and not for the first time. The Americans remained skeptical. Having defined the use of chemical weapons as a "red line," they would have been called upon to intervene in Syria after acknowledging this intelligence. Aware of the administration’s unwillingness to get involved in the Syrian conflict, American intelligence agencies remained skeptical, in the hope of not embarrassing the administration. Moreover, American intelligence officials say that after their false assessments about Iraqi weapons in the lead-up to the Iraq intervention, they wanted to exercise greater caution in this case.

The American explanation is perhaps understandable, but its conduct is reminiscent of previous occasions. While the bodies of hundreds of thousands of Tutsi were piling up in Rwanda, the Clinton administration forbade its officials to use the term “genocide” lest it be forced to intervene. In the case of Aleppo, too, administration officials were careful to state that there was no conclusive evidence to suggest the use of chemical weapons in Syria, even as Senate Intelligence Committee members, who were briefed on the matter one day after the incident, were fully convinced that such weapons had been used.

Chuck Hagel, whose first foreign visit as US defense secretary was to Israel (where President Barack Obama had also made his first international trip of his second term) was asked a direct question about this topic in Tel Aviv. He replied that there was no unequivocal information to confirm that chemical weapons had indeed been used in Syria. “If that’s true, it would be a game changer,” he stated. His host, Israeli Defense Minister Moshe Ya'alon, observed the rules of etiquette.

On the next day, April 23, at the Institute for National Security Studies, Brun said, “Assad used chemical weapons against his citizens, and on more than one occasion.” Brun emphasized that his assertion was being made “in my best judgment”; his listeners, however, had no doubt that he was speaking on good authority.

Several hours later, Secretary of State John Kerry called Netanyahu, hoping to get out of this pickle. Netanyahu agreed that Israel didn't have 100% conclusive evidence — which was sufficient for Kerry to continue his denials. But the media pressure on senior administration officials kept mounting, forcing all of them to admit two days later that there was sufficient evidence of the use of chemical weapons by the Syrian military against civilians.

It’s hard to tell whether this was a move planned by Netanyahu to embarrass the US. Presumably Brun had advised his superiors, and political leaders above them, of what he was going to say. But from Netanyahu’s perspective, the outcome was good: he showed that the US ignores solid intelligence information when it finds it inconvenient, and just how flexible the US's "red lines" are. The analogy to the Iranian issue is apparent — in that case, the intelligence information is also clear. Both Israeli and American intelligence services see the Iranians making headway toward a bomb. From Israel's standpoint, Tehran has already crossed the red line. From the American standpoint, this red line grows increasingly distant.

Even now, having been forced to admit that Assad had crossed the red line, the US is unlikely to intervene in Syria. It “will consult with its allies” over the coming weeks. Such consultations might give rise to condemnations — but not to a military operation. The US knows that if it dispatches planes to Syria, they could be shot down by one of the most effective air-defense arrays in the world.

The last thing the Obama administration wants is to become embroiled in the Syrian bloodbath, whose end is nowhere in sight and where neither side balks at resorting to barbaric violence.