After each Israeli offensive on the Gaza Strip, cancer rates soar among Gazans as a result of increased radiation in the environment, reports Asmaa al-Ghoul. 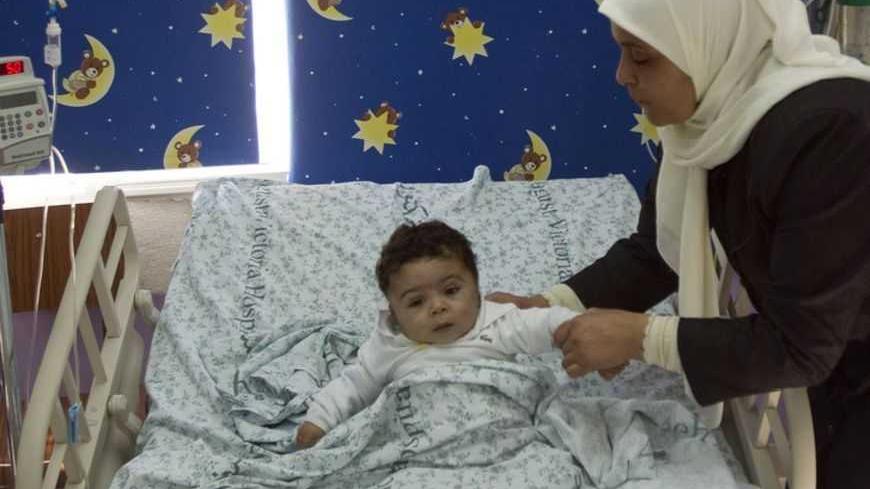 A Palestinian woman lifts her son, who is being treated for cancer, in the pediatric ward of Augusta Victoria Hospital in East Jerusalem Nov. 6, 2012. - REUTERS/Baz Ratner

The Information Center at the Ministry of Health issued a statement in February 2013 according to which 12.4% of the total deaths in Palestine were caused by cancer in 2011, compared to a rate of 10.8% in 2010. Al Mezan Center for Human Rights indicated in a report issued in June 2012 that deaths resulting from cancer in the Gaza Strip amounted to 12% of all deaths, making cancer the second-leading cause of death in the Gaza Strip after heart disease.

Uranium is the main reason

Dr. Khalid Thabet, head of the Oncology Department at the government-run Shifa Hospital, said in a meeting with Al-Monitor that he expects the rate of cancer patients to double over the next five years in the Gaza Strip, due to the uranium used by Israel in its attacks against the Gaza Strip during the 2008-2009 war.

While Israel denied in Jan. 2009 that it had used depleted uranium in its offensive in the Gaza Strip, an investigation by French NGO Action of Civilians for Nuclear Disarmament (ACDN) shortly after the war found the use of depleted uranium "highly probable."

"After several months of investigation carried out in close liaison with the people concerned and with the help of Jean-François Fechino, a consultant on diffuse pollution and an expert accredited to the UN Environment Program (UNEP). ACDN ... produced a 33-page report concluding that the presence of dozens of tonnes of Depleted Uranium (perhaps as much as 75 tonnes) in the soil and subsoil of Gaza is highly probable.

Thabet said that once humans are subjected to uranium, tissue cells need five to ten years to change and develop into a tumor, whose size is initially one cubic centimeter. He said that each year there are a thousand new cancer cases in the Gaza Strip.

During a meeting in his office at the hospital, Thabet said the Gaza Strip was left with 70 tons of uranium after the first war, an environmental catastrophe endangering the lives of all citizens. He explained that the reason behind the spread of these quantities is the fact that the buildings bombed during the war on the Gaza Strip are being used once again. He added that the debris is being processed and reused in construction efforts, thus contributing to the spread of uranium over wide areas. Only time can deplete the amount of uranium in the environment.

Thabet gave as an example the increasing number of cancer patients after the Balkan war in Yugoslavia, the second Gulf War and more recently in Iraq after its occupation by the US, noting that this uranium — be it radioactive or chemical — is a major cause of cancer and can deform fetuses.

According to paragraph 68 of the report issued by the United Nations Fact Finding Mission on the Gaza Conflict, known as the Goldstone report, "The long-term health impact of … weapons containing substances such as tungsten and white phosphorous, remains a source of concern.”

Paragraph 49 of the report notes, “While the mission is not in a position to state with certainty that so-called dense inert metal explosive (DIME) munitions were used by the Israeli armed forces, it did receive reports from Palestinian and foreign doctors who had operated in Gaza during the military operations of a high percentage of patients with injuries compatible with their impact ... these raise specific health concerns.” The same paragraph also notes, “the mission received allegations that depleted and non-depleted uranium were used by the Israeli armed forces in Gaza. These allegations were not further investigated by the mission.”

Eman Shanan, Director of the Help and Hope Association for the Care of Cancer Patients and Survivors, confirms that wars on the Strip are one of the main reasons behind this disease, pointing out that the percentage of cancer cases has increased this year since last November’s war. "But there are unfortunately no medical Palestinian or foreign reports that examine the soil and the environment to see the size of the impact of these wars and weapons and the risk of this disease, which led to the failure of some women who are sick with cancer in their attempts to file a lawsuit against Israel at human rights centers,” Shanan added.

Dr. Thabet says that oncology has three foundations: surgical treatment, which consists of eradicating the tumor and is mostly carried out in Gaza; chemotherapy, a type of treatment that is not always  available; and radiation, which is not available at all, despite that a device was set up in the hospital six years ago for this purpose but is now damaged. This delays treatment and leads to a deterioration in the patient's condition, not to mention the physical and mental suffering that patients endure due to the trips they have to make.

Thabet said the rate of cancer in the Gaza Strip is the same in Egypt, Jordan and among Arab citizens of Israel — i.e., 60 to 70 cases per 100,000 citizens — pointing out that transferring patients for treatment abroad costs the Ministry of Health about $30 million annually.

For her part, Shanan said during a meeting in the association that the absence of a general culture concerned with the importance of periodic inspection and early detection, especially for breast cancer, which can help save patients’ lives by up to 98%, has contributed to many deaths. Moreover, she added that the hospitals in Gaza lack computed tomography or devices and materials for diagnosing the disease. There is also a shortage in medical staff amid fear of the society's perception of patients who admit to suffering from this disease.

Shanan emphasized that one of the other serious reasons behind the development of this disease is the lack of control on pesticides that come from cross-border tunnels and that are used to spray vegetables. Moreover, there is the contaminated water in the Gaza Strip, which is not suitable for human use, as international reports indicated.

She explained that the failure to provide appropriate medications and the idea of sending patients sometimes abroad for a drug worth $24 on a trip that costs hundreds of dollars is disastrous, stressing that with some coordination between the health ministries of Ramallah and Gaza, the number of those referred for treatment abroad could be reduced by half. Patients are unfortunately falling prey to division and the blockade.

Shanan said the way they are dealing with cancer patients in their last stages is sad, but said the association has a "beauty house," where women can choose cosmetic breasts, rather than be forced to cover their flat chests with their hands while in public. This helps to restore confidence in many of the patients. There is also a program called the Love Mat, whereby women write down all their feelings concerning their illness, collect the cards and link them together like a mat.

My husband left me

Safaa al-Taweel, 48, is a cancer surivor. She told Al-Monitor, "I discovered that I had cancer eight years ago while I was breastfeeding my son. I noticed my right breast was bleeding. They had to remove it, but then the cancer spread to the other breast, which was also removed. I remember I was so afraid of the disease and I felt like I was going to die, but now I discovered that it is normal and it is possible for a person to live with it. What hurt me the most is that my husband left me and married someone else, although he stood by me during the first years.”

Her friend Farha al-Fayoumi, 48, unlike Safaa, has her husband taking care of her and saving money to be able to buy medicine for her and travel with her to Egypt for treatment, but he died two months ago due to heart disease. Now she has lost the only person who had been easing her suffering, caused by five years of dealing with breast cancer.

Fayoumi and Taweel say that people's pity is what hurts them the most; they are normal and can work and raise their children like any other mother.