The Gaza War Was Not Iran's War

Iran's role in the Gaza conflict was only that of a weapons provider, writes Meir Javedanfar, despite Tehran's desire to show its power and influence. 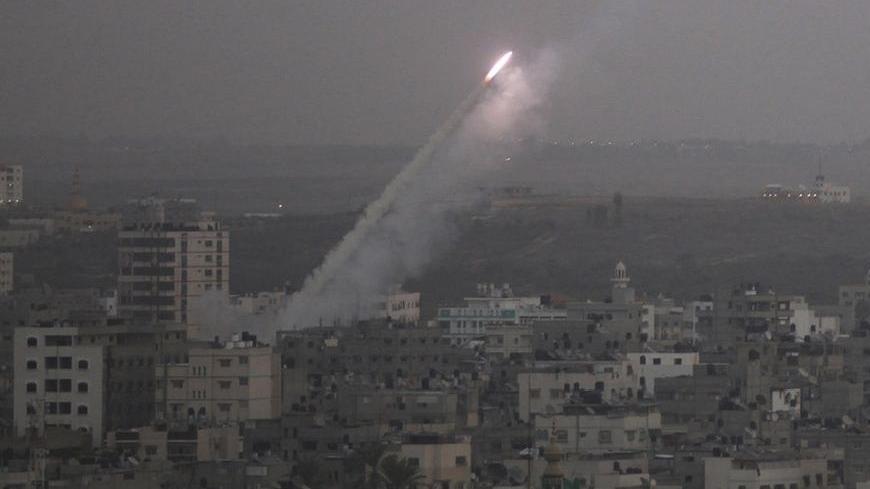 Smoke trails are seen as a rocket is launched from the northern Gaza Strip towards Israel, Nov. 17, 2012. - REUTERS/Majdi Fathi

After eight days of fighting, on the 21st of November, Israel and Hamas declared a ceasefire.

One of the questions which has been addressed since the start of the recent round of fighting has been: what has been the role of Iran?
Iran's role has mainly been that of a weapon supplier and not much else. According to a statement made by Iran's Islamic Revolutionary Guards chief, Gen. Mohammad Ali Jafari, Iran provided technological know-how to the "Palestinian resistance movement." Although Jafari said that Iran had only supplied the technology, the Palestinian Islamic Jihad movement's deputy leader stated that the Fajr missiles fired at Israel were produced by Iran.
On the day of the ceasefire, the Iranian government through parliamentary speaker Ali Larijani went a step further by stating that as well as military assistance, Iran "proudly" also provided financial assistance to Palestinian groups.
Such declarations by Gen. Jafari and Ali Larijani had their own logic. The Iranian regime is feeling isolated and threatened in the region. The regime's domestic legitimacy is at one of its lowest since the start of the revolution while infighting between its ranks rages on. It needs to show muscle and openly declaring that it had managed to get weapons and money into Gaza is a show of strength to its own population and its allies in the region.
However, by making such a public declaration, Mr. Larijani and Gen. Jafari have also provided a major strategic gift to the government of the state of Israel and others in the region who want to see the Iranian regime isolated, namely Saudi Arabia. For years, both governments have accused Iran of providing assistance to militant groups, however lack of evidence has been one of their major handicaps. The fact that Iran played a sophisticated cat and mouse game whereby it succeeded in not leaving its fingerprints made the job for Israel, Saudi Arabia and the US government all the more frustrating.
Now that such high-ranking officials openly admit to having supplied weapons to groups in Gaza, the job of isolating Iran will be even easier than before. This is a gift from Tehran which the Israeli government and AIPAC will loathe to see go to waste. It's not difficult to imagine that armed with such evidence they are now going to call for more sanctions against the Iranian regime, and thanks to the evidence from Tehran, they will have a higher chance of success.
The Saudis are also likely to use the admissions of support for Gaza groups as evidence to place pressure on the Morsi government to control the weapons supply tunnels into Gaza. So far, since coming to power, Morsi has already destroyed many Gaza tunnels. It's quite possible that now more pressure will be placed on him by the Saudis to stem the flow of weapons into Gaza. With Egypt's economy requiring much-needed financial support from various sources including the Saudis, it's very possible that in the future Morsi will try to stem the flow of weapons into Gaza with more vigor.
Apart from supplying weapons, Iran did not have any other influence. If it did, and Hamas was acting as its proxy, the latter would not have agreed to a cease-fire and instead done everything to force Israel to launch a land invasion in Gaza. Such an outcome would have many benefits for Iran and, in fact, this is what Iran’s military and political leaders wanted. They wanted to see Israel stuck in a quagmire in Gaza, with its economy and diplomatic standing suffering heavily while its relations with Egypt reached breaking point. Unfortunately for the Iranian regime, it did not get its wish precisely because Hamas is not its proxy, nor does it have any political influence over Hamas. Otherwise, the story would have been different.
In fact, Hamas has not been shy about declaring its move away from Tehran. In March 2012, it announced publicly that in case of war between Israel and Iran, Hamas "will not be part of such a war.". This was quite a shift from December 2009 when Hamas political chief Khaled Mashal declared in Tehran that in case of an Israeli attack against Iran, Hamas would become militarily involved.
Meanwhile, despite receiving weapons from Iran during the recent conflict, neither Hamas nor Islamic Jihad went out of their way to defend Iran. Neither complained when Egypt turned down a public request from Iran's foreign minister, Ali Akbar Salehi, to visit Gaza.
The recent conflict between Israel and Hamas was not dictated by Iran. This was a Palestinian militant war against Israel, not an Iranian war. Although Iran supplied weapons to Hamas and Islamic Jihad, much against its wishes, Hamas, the most important military and political power in Gaza did not take its political orders from Tehran. Meanwhile, the Islamic Jihad movement, which is close to Iran, is too politically weak to bring much change in Gaza.
It's becoming clear that major Palestinian groups have realized that the Khamenei regime would fight Israel to the last Palestinian, and this is a price which they are unwilling to pay. In its bid to weaken support for Hamas in Gaza, instead of looking at Tehran as Hamas’s source of strength, the current Israeli government should carry out internal policy reform. It would deal a much bigger blow against Hamas by reviewing its counterproductive siege policy in Gaza. It should also look at settlement expansion policy in the West Bank, which instead of strengthening Palestinian moderates, weakens them.